Review: Brave (2012) is Pixar's most impersonal and least consequential film and a more troubling failure than Cars 2. 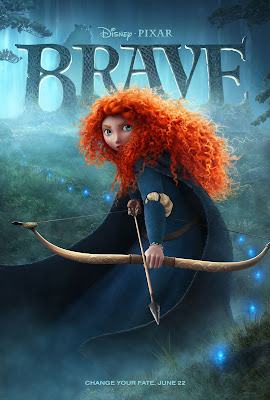 Beset by production troubles and changing schedules, Brave enters theaters as a fable without an author.  I don't know what happened behind-the-scenes with original director Brenda Chapman nor do I know what replacement director Mark Andrews added to and removed from the final product.  But Brave is an almost irrelevant entry in the Pixar library.  While it is visually scrumptious (in 2D, natch) and boasts a terrific lead vocal performance by Kelly MacDonald, the overall story is both painfully slight and lacking any deeper meaning beyond surface-level morals.  While it is technically a superior film to Cars 2, that film was arguably a 'one for me' project with Pixar founder John Lasseter indulging his love of the Cars universe and his love of old-school spy pictures.  Brave is an artistically superior picture that is still pales in comparison to both the better efforts from both Pixar itself and the various animation rivals (Blue Sky, Dreamworks, Illumination, etc.) nipping at its heels.


The best thing I can say about the film is that it doesn't give two figs about the fact that it concerns Pixar's first female lead (nor should it, as Mulan is a superior feminist fable anyway).  Yes the film very briefly hints at the idea that girls have different behavioral expectations than boys and yes the core relationship is one of a mother and her daughter, but the film at no point pats itself on the back for presenting a (pardon the cliches) strong, self-reliant and independent female lead.  Nor does the film play the 'girls can do anything boys can do' card.  And while it's admirable that young Merida's triumph doesn't come due to her ability to engage in battle, but rather her ability to make peace, Merida is presented as such a dynamic warrior figure in the opening reel that it's genuinely disappointing how un-adventurous her journey turns out to be.  On a personal level, and this really isn't a criticism of the film itself, I wanted to see Merida kick a little ass.  Without going into details that the marketing hasn't revealed, the first third of the film sets the stage for a mythical adventure while delivering only a half-hearted bit of momentary peril and soul-searching.

The film's first third is both funny and bittersweet, although it and the entire film becomes a master class where the two main characters say exactly the wrong thing at the wrong time.  That may be realistic, as any parent can attest, but it makes for frustrating storytelling over 90 minutes especially when a major character inexplicably knows exactly what to say at a crucial juncture purely because the movie is almost over.  Speaking of which, in a manner similar to The Lion King, Brave basically spends the first half building towards an inciting incident which leaves only a few brief moments to reflect upon said incident before having to hurry off to the third act resolution.  This pacing is one of the reasons that the film's second half feels so thematically empty. The set-up isn't nearly as classically compelling as the earlier film's 'father is murdered by an evil uncle and hero is set into guilt-ridden exile' plot thread and the third act isn't anywhere near powerful enough to make up for the blink-and-you miss it second act.

The primary peril in the first act is the idea of a forced marriage for the sake of the joined kingdoms, and Brave doesn't even try to sell that idea as anything other than an inconvenience. I know that arranged marriages exist in any number of foreign territories that this film hopes to make money in (to be fair, some arranged marriages are more rooted in mutual consent than others), but it's almost disturbing how the film utterly ignores the darker implications of such a concept.  This isn't even a conventional arranged marriage, but rather a scenario where a young girl is basically sold off into marriage (and, um... sex), by her mother no less, to the winner of a token athletic competition.  It's "Gee, poor Merida may have to marry a loser who might not let her race around on her horse and shoot arrows at trees" not "Gee, poor Merida has to get married to someone whom she has no interest in and will be expected to consummate said marriage".  Merida is treated by her mother like chattel and the film treats it like the grouchy princess is merely fighting for her right to party. Even Aladdin took this plot thread more seriously than Brave does.

This allows the film to present Merida as somewhat selfish and spiteful for not wanting to follow in her mother's footsteps and 'do what's best for the kingdom' and the film's finale doesn't entirely resolve the issue. While it could be read as encouraging that the picture doesn't come out completely on the side of the 'I gotta be me!' rebellious teen while her parents (both alive and well thank you much) learn a lesson in letting go, the picture sets up a situation where said rebellious teen has a pretty solid argument, thus the humbling feels unpleasant.  The film arguably wants to be a fable about a mother and daughter coming to a mutual understanding about tradition versus freedom, but Drew Barrymore's Whip It is a far superior variation on this morality play because there is a personal price to be paid on both sides and because neither daughter Ellen Page nor mother Marcia Gay Harden come off as unreasonable.

Moreover the inciting incident at the halfway mark truly has no bearing on the outcome of the story and has no connective tissue to the thematic tale being told.  Pardon my vagueness, but 'what happens' is a so disconnected to the rest of the story that you could remove it from the narrative and not effect the emotional finale one bit while only slightly changing the actual climax.  Again, I don't know what went awry during production, but I have my theories.  I can only wonder if Brave started as a personal story from Brenda Chapman and that her eventual replacement (Mark Andrews) didn't have the intimate connection to whatever Chapman had in mind.  Too much time and money already spent plus the fear of bad publicity that would come from both sacking their first female director *and* cancelling Pixar's first female-centric animated film, and so they soldiered on trying to just finish the darn thing in an efficient manner as possible.  This is all speculation and arguably wishful thinking, as it offers an alibi for the mediocrity of the final product.

Gorgeous animation and a few sparkling first-act moments cannot compensate for the insignificant and inconsequential second and third acts.  Lacking memorable moments, interesting characters save for its lead, and burdened by an unfocused and small-scale narrative that can't commit to a distinct moral viewpoint even while giving one character the clear moral right.  That it deviates from Pixar's standard 'existing in safety versus living in danger' motif is less of a problem than the fact that it has no overarching thesis at is core.  It is rarely boring but rarely engrossing, a trifling piffle that fails as art and very-nearly fails at entertainment as well.  Brave may not supplant Cars 2 as the worst film Pixar has yet made, but it clearly qualifies as the most disappointing.

Did not expect this. What's happening to my summer Scott? First Prometheus, now if this one disappoints me as well, what's next, Dark Knight? I would have never thought that you'd be giving higher marks to Madagascar over Brave. I hope when I see it, maybe I find something different. My three daughters so want to see this.

Re your review: Noticed the Thursday LATIMES profile of Mark Andrews (wearing kilt) spinning Brenda Chapman's replacement, with no comment from Ms. Chapman.

Do you think any of these problems are to do with John Lasseters promotion to run Disney animation.

But you are missing the fact that in the period that Brave is set in arranged marriages were the norm. Women were traded as chatell. No one married for love - especially among the nobility. Marriages were arranged to strengthen kingdoms etc. So the fact that Meridia doesn't want to get married or at the very least want to pick who she marries is the huge plot point in the movie. The fact that her mother starts to understand this is huge for that time.

Re: Film's treatment of arranged marriage.

THANK you! I thought the exact same thing. I believe that if a film is prevented by its rating from addressing the defining feature/problem of forced marriage, that is that the heroine will be entering into a form of sexual servitude to a stranger in a culture where martial rape is likely not a concept, then forced marriage should not be central to a movie's plot. I wouldn't even mind if they had still come down on the mother's side, but you can't just not address this. This is really not an appropriate topic for a kid's film.