Review: Oscar hopes aside, The Descendants (2011) is one of the year's best films. 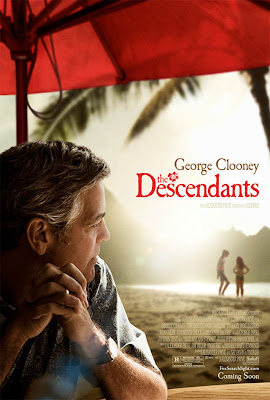 The problem with the movies that are released this time of year is that they are examined in terms of their Oscar potential first and their quality as a film second.  Thus, upon viewing, we often have to remind ourselves to actually watch and critique the movie we are watching, rather than mentally dissecting whether or not it has the 'right stuff' to take home Oscar gold.  I don't know how well Alexander Payne's The Descendants is going to fare in the various year-end awards races.  It is currently among the front-runners, but as Heath Ledger and David Fincher could tell you, it's all about who is in the lead when the race stops.  But putting that aside, let me state that The Descendants actually deserves to be discussed as a front runner.  Not because of its pedigree, its release date, or its Oscar-friendly narrative, but because it is indeed one of the best films of 2011.

A token amount of plot: Matt King (George Clooney, in fine form) is the head of a large family living in Hawaii and descendants to ancestors who purchased a large chunk of undeveloped land.  Faced with a decision about whether or not to sell this land to developers (which would make his various cousins quite wealthy), he is rocked by the boating accident of his wife, which leaves her in a coma.  As he tries to negotiate the emotional pitfalls of this sudden loss, as well as trying to reconnect with his two daughters (Shailene Woodley and Amara Miller), he is further devastated by the revelation that his wife was having an affair at the time of her accident.  And that's all you really need.  The film is primarily a character study, and it works because it goes out of its way not to be particularly 'important' or prestigious.  Despite the heavy subject matter and raw emotions in play, the picture keeps a somewhat light tone, which makes the moments of honest devastation all the more compelling.

The picture works as a true actor's showcase, highlighting not just Clooney's terrific and un-showy work, but a host of terrific supporting turns.  While the film flirts with turning the wife (Patricia Hastie) into a 'woman in refrigerator', Payne and company create a film that has more than the usual share of worthwhile female characters (this film easily passes the Bechdel Test).  Although Shailene Woodley gets most of her big scenes in the first act, she remains a sympathetic and nuanced portrayal of a young girl who avoids most of the cliches of teenage or college-aged girls in mainstream films (bonus points - at no point does she have to deal with 'boy troubles').  Also shining is the perennially undervalued Judy Greer, who makes the most of her handful of scenes in the second half of the picture.

Robert Forster provides welcome support, although it is weird that he plays Clooney's father-in-law, not his dad, since the many close-ups of the star's aging face reveal that Clooney is clearly starting to resemble Mr. Forster.  Also doing much with little is Mathew Lillard, in arguably one of his first movies since Scream where he isn't vastly superior to the material he is being forced to play (IE - he's usually pretty good or highly entertaining in some pretty bad films).  Nick Krause does fine occasionally understated work as Woodley's friend/boyfriend who ends up traveling with the mourning family.  The film's only false note occurs in his first major moment, where his oafish and painfully insensitive reaction to a older person's mental illness clashes with his generally decent persona that makes up the rest of his scenes (he's not very bright, but he's not mean or cruel and he has some life experience to go off of).

Forsaking obvious melodrama even when the material arguably would justify it, The Descendants builds to a surprising emotional crescendo.  Clooney's character is clearly presented as a sub-par husband and father, but the film acknowledges his sins (believing that his role as a provider compensated for all other inefficiencies) without turning into a 'gee, if only he worked less and lived more' morality play.  The screenplay acknowledges the real resentment that comes when a family member departs unexpectedly, as well as the desire to move on when the target of your scorn isn't around to face judgment.  At its best, the film deals with the uncomfortable idea that 'doing the right thing' isn't always the right thing for those who's lives are affected.  Characters act with sometimes noble intentions, but their actions don't always work out for the best for all affected parties, and we are left to decide what was 'right' in this highly messy situation.  Like the best of Payne's work, The Descendants doesn't explicitly take a side in the overall moral drama, and it is ever stronger for it.

With terrific acting all-around, a smart and literate screenplay filled with recognizable adults (and kids) having plausible conversations about things that matter, and an uncommonly singular narrative that works as both human comedy and borderline epic tragedy, The Descendants is easily one of the more engrossing films of this calendar year.  Whether or not it triumphs at the Oscars I can only guess.  But the highest compliment I can pay is that it pretty much deserves to, regardless of where it ends on my personal 'best-of' list.

Well, this is definitely the movie I'll see this weekend. I hope it scrubs the nasty that "J. Edgar" taste from my mouth.