Review: Despite solid chuckles and insightful commentary, The Campaign (2012) fails to respect the reality of its story. 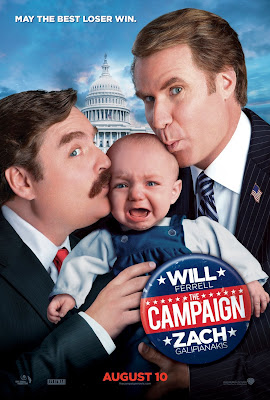 Jay Roach's The Campaign is both painfully stupid and pointedly smart at the same time.  As a film, it's a chaotic and implausible mess, going from one major event to another with no real connective tissue.  It has outrageous events occur onscreen and mostly ignores the real-world implications of said event.  Yes, it is technically 'funny' in that its major characters do and say things that elicit laughs.  But those laughs come at a high cost, as the film often sacrifices its inherent drama and potential realism for the sake of extended improv riffs.  But in terms of what the film has to say about modern politics, it is both insightful and painfully cynical.  Jay Roach has played in the sandbox of real political drama, having helmed the superb Recount and Game Change for HBO.  Like Ferrell's last big-scale vehicle, The Other Guys, it has whip-smart social and political commentary trapped inside a genuinely bad film.

The plot basically concerns a political contest for a North Carolina senate seat, where Cam Brady (Will Ferrell) expects to win another uncontested election.  But after the Blue-Dog Democrat accidentally leaves a scandalous voice message on the answering machine of one of his socially-conservative constituents, the Motch Brothers (Dan Aykroyd and John Lithgow doing an obvious riff on The Koch Brothers) sense an opportunity to elect a Republican who will theoretically allow them to engage in a new nefarious (and not as fictional as you might think) form of outsourcing in the district.  Marty Huggins (Zach Galifianakis) gets the gig, as money and political consultants race to transform a socially-clueless country bumpkin into a political dynamo.

Both of the lead actors are basically playing variations on their stock characters, but they feel out of place in a relatively real-world political arena.  Pretty much everyone else (Jason Sudeikis, Dylan McDermott, Brian Cox, Katherine LaNasa, and Sarah Baker) plays this material just straight enough to make it plausible while its two leads act like cartoon characters.  Their performances elicit amusement but at the expense of the satire.  This is not a film where outlandish behavior has realistic consequences.  Words and deeds from both candidates that would likely end a candidacy in real life are brushed out with barely a word from its various real-life pundits.  The picture is painfully short, with the majority of the campaign basically taking up the second act.  That leaves little time for any observation and real-world analysis when so many sequences are basically extended improvisation sequences for our stars.  It's not my place to say what movie should have been made, but I spent much of the running time either wishing that it was closer in tone to Semi-Pro (which was at its core a dramatic comedy vehicle for Woody Harrellson which had plenty of room for a stereotypical Will Ferrell character).  If the film was told from the point-of-view of the two deadly serious operatives (Sudeikis is downright terrific in what amounts to a dramatic turn while McDermott earns deadpan laughs), it would have allowed Ferrell and Galifianakis to do their shtick without said buffoonery taking center stage at the expense of the political context.

All of this is a darn shame, because there are real ideas at the core of this picture.  The film blatantly argues that big money has so corrupted the process that the actual candidates themselves are irrelevant, both mouthing off variations of the same generic platitudes.  I'm not sure I would agree with that, as I'm not a fan of the 'doesn't matter who wins' school of politics as we've seen quite vividly over the last ten years that elections do have consequences.  But more than bemoaning the effects of corporate influence, The Campaign basically accuses the modern political system, and yes the voters themselves, of basically voting for the candidate who best approximates adolescent masculinity.  The 'more of a stereotypical *man* than you are!' school of politics has produced some pretty disastrous candidates and occasional victors, as whether or not a would-be office holder can shoot a deer or name his favorite beer becomes more important than where he stands on the issues (this is the rare political film where the absence of any explicit political opinions actually makes sense).  In short, The Campaign argues that we constantly expect the same cliches out of our candidates and then act surprised when those elected officials make the same mistakes or draw the same incorrect conclusions.  As a piece of political commentary, it is actually quite savvy and openly judgmental.  I just wish it were a more coherent and plausible enterprise.  Barring that, I wish it were funny enough to justify its absence of appropriate plausibility.

In the end, The Campaign is a stupid farce that is afraid or unwilling to be a smart dramedy.  The actors have the chops, Jay Roach and producer Adam McKay have the brains, and I'd argue an audience would have followed them down this path.  Alas, the film as is resembles a lesser Tyler Perry effort, constantly sabotaging its narrative by putting cheap jokes over story and laughing at its very real drama for the sake of attempted guffaws and would-be catch-phrases.  There is real meat to be found in this bland and over-spiced dish, but you have to dig through a lot of rotten vegetables and bland rice to get to it.  Whether The Campaign doesn't trust its audience or didn't trust itself I cannot say.  But I'm willing to bet that there is a great movie lying somewhere on the cutting room floor.