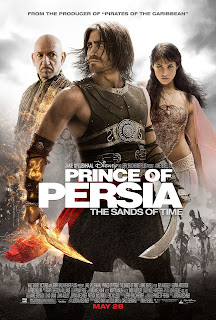 Prince of Persia is a film so desperately chasing the shadows of its predecessors that it fails to be its own product. It feels like a Frankenstein-monster patchwork from the other period adventure franchises of the last decade, but it neglects the key ingredient: quality. Anyone can grill a steak, but having the right cut of meat is 80% of the battle. The film is a wildly expensive, genuinely epic adventure story with an overt political subtext and a couple rousing action scenes. But it is fatally miscast, badly written and it neglects to develop its characters beyond the call sheet. It's not a bad movie, but it fails to be anything approaching a good movie.

A token amount of plot - Dastin (Jake Gyllenhaal) grew up as an adoptive brother to the heirs to the Persian throne. As a child, he was literally scooped off the street as a child by the king who was impressed with the young 'street rat's' bravery. However, apparent evidence of illicit arms sales has prompted calls for the invasion of Holy City of Alamut. After a successful invasion fails to yield the illegal weapons, treachery rears its head as Dastin is framed for the murder of his adaptive father, King Sharaman. Dastin is forced to flee Persia and Alamut's Princess Tamina (Gemma Arterton) ends up accompanying him. On the run, Dastin and Tamina must attempt to find the real murderer, as well as the real reason for an apparently fraudulent war. But what does it have to do with the mysterious 'dagger of time', which (by Grabthar's hammer) allows the wielder to go back in time just long enough to correct a single mistake?

It's no secret that the entire narrative of the film is a parable for the invasion/occupation of Iraq that started in 2003. Not only is an apparently innocent city invaded to find non-existent weapons of mass destruction, but the real villain eventually hires out bloodthirsty warriors to kill their way across the lands seeking a treasure and causing general chaos. The film desperately tries to have its cake and eat it too, making the good guys into unknowing participants in a war crime, and even having them stand up for due process and fair trials. But since we know right away what is afoot, we are unable to enjoy the first action sequence, an otherwise impressive display of real stunt work as Dastin uses parkour and stealth to unlock the gates and take the city with minimal bloodshed. If we are invested in the story, how can we enjoy the sight of our heroes basically committing murder and slaughtering innocent people?

Further moral confusion muddies a second-act chase scene. Again, the stunt work and choreography is wonderful, but we are basically expected to cheer as the 'innocent of patricide' Dastin kills about a dozen innocent soldiers whose only crime is attempting to apprehend the fleeing fugitive. To put this in perspective, how much would anyone have enjoyed The Fugitive if it contained extended sequences of Dr. Richard Kimble gunning down police officers and security guards as he fled in the attempt to find his wife's real murderer? Unlike the overtly amoral Pirates of the Caribbean franchise, this film attempts to position Dastin and Tamina as old-school heroes whose hearts are as pure as their intentions are noble. More importantly, even if Dastin is cleared of murdering the king, why are there no calls for his head for the dozen-or-so murders that he actually committed? That, ladies and gents, is why the A-Team never killed anyone.

Leaving aside moral qualms, the characters are vary between uninteresting and openly obnoxious (I'm not even getting into the whole 'cast Americans and Brits in a story about Persians' issue). Jake Gyllenhaal attempts to play the dashing (and beefed-up) hero, but he has absolutely none of the knowing spunk of Brenden Fraser or even Orlando Bloom. Although his stuntman puts on a good show, Gyllenhaal brings nothing to the table other than abs and boyish good looks. And Gemma Arterton tags along primarily as a token love interest. Yes, she has a reason for tagging along, a reason that would have served the story had it been revealed earlier in the second act, but she contributes nothing to the forward-momentum of the story other than the constant need to read every line as if she labeled every piece of dialogue with 'more feisty'. And since Tamina is constantly referred to as a one-of-a-kind beauty, I must report that she is not nearly as attractive on the inside and out as Keira Knightley's Elizabeth Swann and/or Rachel Weisz's Evelyn Carnahan O'Connell.

The alleged romantic sparring between Dastin and Tamina is yet another variation on the 'they hate each other until they love each other', but they are so obnoxious towards each other that that end result is that we hate them both. The rest of the supporting cast does what they can to maintain their dignity. Ben Kingsley is a boring villain, while Alfred Molina merely brings the ham as a nefarious gambler. Amusingly enough, the film introduces a nearly silent knife-thrower as the token black character, but then redeems itself by giving Steve Toussaint the best action sequence in the picture. Ronald Pickup has a few nice moments as the king in the opening act, but fails to justify why the noble king would allow a wrong-headed invasion to occur in his name without consequence. Toby Kobell and Richard Coyle bring a needed seriousness-of-purpose to the absurd goings-on as the natural-born sons of the king, and their interactions with Dastin are the film's highlights.

While the film looks and feels like the $200 million was spent on the screen, the action sequences are too-often cut in that tight/quick fashion that prevents you from seeing any actual swashbuckling. In fact the whole film feels claustrophobic, which is odd considering the many expansive location-establishing shots that pepper the film. Only the initial invasion and the second-act escape truly shine, but they are only enjoyable if you can ignore the moral ickiness under the surface. Ironically, despite being sold as a family-friendly romp, the violence is actually bloodier and more gruesome than the relatively bloodless carnage in The Mummy or the first Pirates of the Caribbean picture. In the end, the most interesting thing about Prince of Persia: The Sands of Time is its overt political conscience. Just as George Lucas went sledgehammer-obvious in Revenge of the Sith after audiences missed the parallels in the first two Star Wars prequels, producer Jerry Bruckheimer seems dead-set on making sure audiences 'get it' after they ignored the subtle and chilling anti-War on Terror parable in the Pirates of the Caribbean sequels.

But most audiences don't go to a $200 million swashbuckling period adventure based on a video game for a lesson in political discourse (especially one bravely told seven years after the initial offense - alleged conservative-darling 24 did the same story right as the Iraq was being invaded). They go for entertaining characters, rousing action scenes, and eye-popping visuals. Alas, director Mike Newell fails on all three counts. I must give credit for Prince of Persia for attempting to be a real movie, but that doesn't discount the fact that it's not a very good movie.

Grade: C
Posted by Scott Mendelson at 9:47 AM