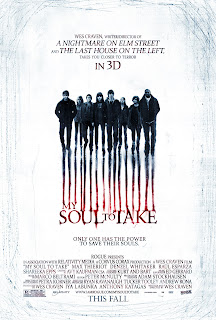 I often discuss the weird parallel nature of certain filmmakers. By that I mean that certain would-be auteurs are wildly inconsistent in their output. Could the same M. Night Shyamalan who wrote and directed The Sixth Sense also craft The Last Airbender? And could the same Chris Columbus have made both Harry Potter and the Sorcerer's Stone and Percy Jackson and the Olympians: the Lightning Thief? But there is no more inconsistent director out there than horror icon Wes Craven. Wes Craven basically defined the horror genre for a few decades, unleashing Last House on the Left and The Hills Have Eyes in the 1970s, giving us A Nightmare On Elm Street in the 1980s, and then revitalizing the slasher film with the Scream series in the 1990s. Unfortunately, My Soul To Take is very much a film from the director of Cursed, Vampire In Brooklyn, and Deadly Friend. In some ways, it's actually worse than those.

A token amount of plot: 16 years ago, the town of Riverton was rocked by the killing spree. The killings only came to end when 'the Riverton Ripper' was apparently killed while trying to murder his pregnant wife. There were seven children born in that town the night the serial killer met his end. On this notable anniversary, death once again stalks this small town as the children born the night the Ripper died start to meet their own grisly ends. Is the Ripper still alive? Has he returned from the dead to wreak vengeance on the children born on that fateful day? Or has he somehow stolen the soul of one of the teens, and used them to unwillingly continue his killing spree?

I wish I could tell you that this represents a triumphant comeback for Wes Craven, as this is his first film since Red Eye and his first original screenplay since Wes Craven's New Nightmare (arguably his masterpiece). But this hazy, narrative confused and generally unfocused effort is a failure at nearly every level (be sure to read that above synopsis once or twice, because the film does a terrible job establishing its plot through visuals). The teens barely register as stock characters, let alone three-dimensional human beings. The writing is often laughable and the acting is genuinely bad. The teens don't really act, they just stand around reciting bad dialogue so that much of the film resembles a table read. Again, the fact that the same man who wrote this also wrote Wes Craven's New Nightmare is astonishing.
There is next to no real tension and no real attempts to build suspense. The violence, while occasionally brutal and bloody, has no sting and the deaths have little real consequence. That's one of the more surprising things, as Wes Craven movies often have a sting to their violence that other horror films lack (note the moment in Scream 2 when Sydney and Dewey debate over who gets to tell Randy's mother that her son is dead). The film spends much of the first half showing the one-dimensional teenagers engaging in 'teen movie' behavior. Yet, we still don't care about them because they aren't real people, just stick-figures waiting to get bumped off. Top it off with a plot that becomes so convoluted that much of the finale becomes retroactive exposition, and you have a contender for one of the worst films of the year.

What's most shocking about this picture is how unendingly dull and pointless it is. Even Craven's worst efforts usually have a certain spark. Shocker has Mitch Pileggi's over-the-top antics, and Deadly Friend has its 'you've got to be kidding me' absurdity (plus a beheading via basketball). But My Soul To Take has nothing to differentiate it from the countless straight-to-DVD horror pictures that languish on the shelf on any given week. In fact, when it comes to showing how a fearful small town is rocked by a murder spree, the film pales in comparison to the visually-gorgeous and scrumptiously acted From Within. To see Wes Craven descend back into his late-80s nadir is a tragic thing indeed. This is certainly the worst, least entertaining thing he's made in recent memory.

Maybe it's time to reevaluate the filmography of Wes Craven. Maybe in the end, he's just an uncommonly intelligent and thoughtful, but otherwise run-of-the-mill, horror filmmaker who knocks one out of the park once or twice a decade. Aside from the triple whammy of Wes Craven's New Nightmare, Scream, and Scream 2 in the mid 1990s, he has generally struggled to make more than one good film in a row. Taken in that vein, My Soul To Take is not so much a cataclysmic whiff as just 'the miss' that occasionally proceeds greatness. I guess the best thing that can be said for My Soul To Take is that history bodes well for Scream 4.

Grade: D
Posted by Scott Mendelson at 9:35 AM