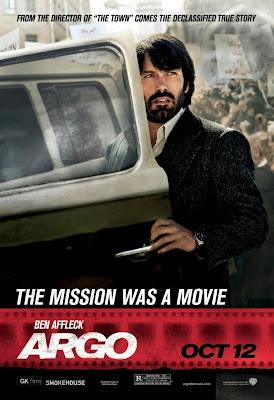 I've written a lot over the years about film punditry so seemingly starved for excellence that they will anoint mere craftsmanship as art.  Ben Affleck's Argo (trailer) is a crackerjack piece of filmmaking craft.  It is an astonishingly authentic representation of a rather important historical turning point, vividly capturing time and place with such skill that it genuinely feels like a film created in its time period.  It is rich with period detail and filled to the brim with top-notch character actors.  It is so engaging and so entertaining that I frankly don't care whether every allegedly non-fiction detail is true.  But ironically the picture's greatest strength as a movie arguably becomes its greatest flaw as a film.  It is not really about anything other than itself, refusing to infuse its narrative with any deeper meaning beyond our own knowledge of what happened next.  It is not a sober historical document but rather a caper film that happens to take place during a major moment in world history.  Like Moneyball, it is refreshingly lacking in perceived importance but also suffers from a lack of gravitas.


The plot is pretty simple.  During the 1979 takeover of the American Embassy in Iran, six Americans managed to escape out the back and take refuge in the home of the Canadian ambassador (Victor Garber).  As the hostage crisis lingers ever onward, the US government bats around options on how to extract the Americans before they are discovered missing.  The best bad idea comes from Tony Menendez (Ben Affleck), who suggests setting up a fake Hollywood movie and smuggle the Americans out under the guise of being a Canadian film crew.  That's pretty much all you need as the film plays out like a top-notch caper film.  There are a bunch of grizzled male character actors filling up the various chains of government command (Bryan Cranston, Kyle Chandler, Zeljko Ivanek, etc.) plus amusing extended cameos from John Goodman and Alan Arkin representing the Hollywood side of the equation.  The acting is superbly naturalistic all-around, with only Arkman and Goodman getting any scenery to chew (specifically in a major scene with Richard Kind).  The dialogue is peppy and often quite funny.  Fortunately the film only spends maybe twenty minutes buried in Hollywood minutiae before getting to the matters at hand.  During the film's strongest segments, it becomes a procedural for how a mission like this would have gone down back in 1979.

Right from the start, where we see the very old-school Warner Bros. logo, director Ben Affleck displays an utmost commitment to crafting a picture not about 1979 but from 1979.  The period details are spot on and the film is shot and cut to resemble an old-school thriller from the would-be heyday of political thrillers.  The picture does not judge in hindsight nor does it draw conclusions brought about by 33 years of 'future past'.  It is merely a ripping entertainment masquerading as a historical time capsule.  The film humanizes the Iranian captors not by softening their cruelty but by explaining in detail why they stormed the embassy in the first place.  The film humanizes those in peril not by building melodramatic human interest subplots but by creating slice-of-life portraits (Affleck's Mendez spends only enough time interacting with or talking about his son to establish his career-before-family regret).  I must carp that the final fourth of the picture undergoes so many 'ticking time bomb' elements of the genre that I can only wonder how much of the actual attempted escape is fictionalized.  And I certainly could carp at the idea that Ben Affleck cast himself as a man who in real life was very much an Hispanic American.  But Argo is overall a rather terrific popcorn entertainment.

As a movie, Argo is a triumph.  It is a riveting bit of recently declassified history that shines a light on a bright spot during a time of darkness.  That the film merely exists as a document of its events can only held against it so much, perhaps the separation between a great movie and a great film.  But after a momentary backslide with the melodramatically stupid The Town (review), Affleck is back on firm ground as a top-notch director of intelligent adult entertainments.  That it lacks the devastating power of Gone Baby Gone is mitigated by the obvious technical skills on display and the joy in seeing terrific actors performing terrific writing.  Whether or not the sheer quality of craft qualifes Argo as high art I will leave for you to decide.  But at what it sets out to do and how it sets out to do it, Argo is a nearly unqualified success.