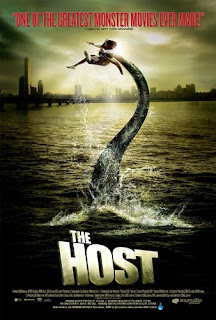 The Host is a surprisingly successful combination of a number of genres. It is at times, a genuinely scary monster movie, a poignant family drama, a campy comedy, and, like all of the best horror films, a richly symbolic political parable. That it all gels together is almost a matter of luck. It is one of the very best monster movies in many many years, partially because it remembers to actually make your monster something to be truly frightened of.

The plot, in brief: Gang-du (Song Kang-ho) is a loving, if absent-minded father to young Hyan-seo (KO A-sung). During the day, he helps run a food stand near the Han River Bridge with his own father. All hell breaks loose on a random afternoon when a giant mutation leaps out of the river and kills dozens of citizens before snatching Hyan-seo and returning to the waters below. Fearing the worst, the rest of the family reunites and is taken into custody by the government, as the powers that be fear contamination of an alleged virus that this monster allegedly carries. After a very-much alive Hyan-seo is able to contact her father from the layer of the monstrous 'host', the entire family makes a desperate sprint to save their youngest member. Ironically, the biggest obstacles to this quest are not the threats by the monster, but the 'monstrous' bureaucracy of an uncaring and ruthless South Korean government, which may be taking its orders from someone else.

First and foremost, the creature in question was created partially by WETA Workshop (the FX house that Peter Jackson founded and used for Lord Of The Rings, King Kong, and The Frighteners), and it shows. Although the CGI isn't always seamless, the actual monster is truly horrifying. This is easily the scariest original onscreen creature since The Relic (without that creature's unfortunate resemblance to Snufalufagus from Sesame Street). Even though it's barely the size of a bus, it's presence looms much larger. Even the initial attack is shocking in its banality. It strikes without warning, in broad daylight, in plain site. The almost comical casualness of the scene and its presentation is surprisingly effective. Also worth noting is the issue of onscreen violence. Director Bong Joon-ho carefully picks and chooses when to show you gore and when to keep it off screen. Much of the violence is off screen or discreet, but every once in awhile he gives you a full on viewing of slaughter and carnage (different genre to be sure, but Last King Of Scotland also successfully used the withholding of onscreen violence to make the eventual reveals all the more sickening).

The acting is completely appropriate, bouncing between almost comical displays of anguish and deadly serious brooding. What's more noteworthy is the razor-sharp political satire than exists within. As is often the case with monster movies, the real monster is 'us'. Much of the second and third acts of the picture involve the family struggling to escape from government authorities and those who are frightened enough by the government-fueled hysteria that they would turn in their own friends for a small reward. The film specifically indicts US international policy as an unwanted and often murderous meddler as the monster is more or less created by American scientists who force Koreans to dump dangerous amounts of formaldehyde into the public waters (something that actually happened in 2000). The funniest bits involve the news coverage of the attack, which concentrates almost completely on the one American victim. This lone decent American dies heroically saving others yet becomes a key propaganda tool in suppressing the people and enforcing authoritarian martial law. The would-be subtext and symbolism is overflowing, and I'll let you decide what the movie means to you.

Yet, even if you choose to ignore the politics, you're left with a truly frightening and exciting monster movie, which balances the fantastical with a completely convincing family drama that
effectively grounds the genre elements in a frightening 'plausibility'. The horror elements are convincingly scary and pulse-pounding. The family struggles are genuinely moving. The subtext is multi-layered never simplistic. And, when appropriate, the film is laugh-out-loud amusing. Regardless of what kind of film you find The Host to be, it's a terrific piece of entertainment.

Grade: B+
Posted by Scott Mendelson at 11:45 AM No comments: Links to this post