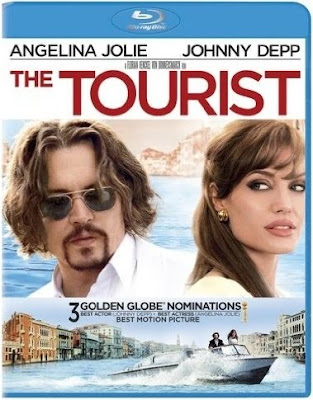 This is the first of a periodic feature of sorts, wherein I basically comment on a film that I didn't get around to seeing in theaters for one reason or another (the biggest reason is usually that my wife wants to see it, but it's not worth the hassle of arranging a sitter). Unlike my theatrical reviews, these will be a bit less formal and may or may not discuss the critical and commercial reaction to a given film. Yes, this section will arguably grow a bit come June when my second child is born, so I'm testing the waters right now. The first installment is a mini-review of The Tourist.

While the film was tagged as a box office flop, The Tourist actually grossed $274 million worldwide. That's Johnny Depp's sixth-biggest grosser, and his top grosser for a film that wasn't a Pirates of the Caribbean film or a Tim Burton fantasy. It's Angelina Jolie's seventh-biggest film yet, and fifth if you discount her animated cameos in A Shark Tale ($367 million) and Kung Fu Panda ($631 million). It's actually $19 million behind the $293 million worldwide take for Salt, which is likely getting a sequel on a generally similar budget ($100 million for The Tourist vs. $110 million for Salt). Sure the film made over $200 million of its grosses overseas, but money is money is money. So The Tourist was not a flop in any traditional sense, but is it any good? Uh... no.

Considering the talent involved, The Tourist is a flat, painfully slow and often unengaging thriller that fails to thrill or even pique the interest. I'm loathe to penalize a film for its budget, but there is nothing in this film that justifies the $100 million price-tag, and the over sized budget only makes it that much easier to point to the film's alleged under-performance and crow about how 'the adult drama is dead!!' No, the $20-50 million adult drama is alive and well, thank you much. Anyway, back to the actual movie, pretty much everything that goes wrong with the picture can be attributed to the plot and story structure, whereby we have no reason to be emotionally invested in the plight of Frank, the hapless American math teacher who gets involved in international intrigue, or his romantic pursuit of Elise, an elegant and sophisticated woman so far out of his league that it's not even funny. Johnny Depp has fun playing a normal guy for the first time since, I dunno, Nick of Time back in 1995. But his almost comical pursuit of Angelina Jolie is so ineffectual that we spend most of the movie wanting him to just go home or rolling our eyes in annoyance as he chooses again and again to put himself back in danger for the seemingly unattainable Jolie. Jolie looks fabulous but fails to make an impression with a character that constantly keeps everyone, including us, at arms-length for nearly the entire picture.

The reason the film cannot work is that quite frankly, none of the character interactions make much sense until we know just what is going on. Without going into spoilers, once all is revealed, we realize that quite a few scenes involved plot and character exposition that was delivered purely for our sake (IE - the two characters in a given scene would have seemingly already known said information). Because of the plot as it is, Depp and Jolie have no chance to create any real chemistry, which makes the apparent romance that blooms downright absurd. The supporting players fare little better. Paul Bettany has little to do other than scowl and make one boneheaded move after another (with Interpol agents like this, no wonder they can't catch Carmen Sandiego). Rufus Sewell pops up just long enough for us to go 'Hey, that's Rufus Sewell!', which is beyond distracting since we know the movie isn't over until Sewell shows up again in some capacity. The only one to escape with their dignity is Timothy Dalton, who plays Bettany's far-more competent boss. Looking younger and more robust than he has in decades, the former James Bond exudes all the malicious romantic charm that is missing from the two stars. Save for hair that was once brown that is now gray, Mr. Dalton may as well just walked off the set of The Living Daylights.

So yeah, it's a pretty terrible movie, one that shoots itself in the foot via a plot that leaves us without any rooting interest in the main characters and any set-pieces or clever dialogue to fill in the gap. The Tourist is no box office bomb, and the fact that Angelina Jolie and Johnny Depp got this thing to nearly $300 million worldwide is the very definition of star power.