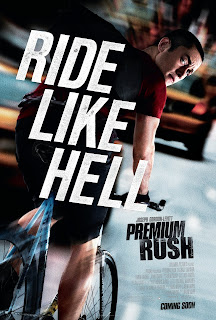 The first thirty minutes and last twenty minutes of David Koepp's Premium Rush have the makings of a pretty great B-movie.  It has all the ingredients of a solid piece of genre, with engaging heroes, a terrific villain, and some genuinely entertaining and fresh action sequences.  For its first third, it powers along with an uncommon confidence, establishing its central conflict while dazzling the viewer with stunts that are all the more impressive for being real.  But at around the thirty minute mark, the film slams on the brakes and spends an unholy amount of time with expository flashbacks and needless exposition, testing the viewer's patience and leaving us waiting to get back to the chase.  The film eventually kicks back into gear in time for the relatively successful climax, which both satisfies and makes us realize that the proceeding half-hour or so was all the more needless.  Premium Rush would have made an excellent hour-long short film, but as a feature-length motion picture, it frankly doesn't have enough meat on its bones.

The plot is about as simple as it should be.  Joseph Gordon-Levitt stars as a cocky and daredevil-ish bike messenger working on the busy and perilous streets of New York City.  The plot kicks into gear when he takes an assignment to deliver a mysterious envelope to a Chinatown location within 90 minutes.  The client is obviously nervous about handing over the seemingly precious content, and we soon discover that it's very important to at least one very dangerous man.  Enter Michael Shannon, again auditioning to replace Health Ledger as The Joker (I mean that as a compliment), demanding that the hapless bike messenger hand over his package 'or else'.  But duty comes first, and the chase is on.  The chase in question takes the form of what can only be described as a live-action Road Runner cartoon.  While Gordon-Levitt  is named 'Wilee' and Shannon is given the frankly ridiculous name of 'Bobby Monday', the film explicitly states the reversal of roles. During the first act we witness Shannon continuously failing in his pursuit of the speedy Road Runner as our hero zip-dangs away once more.  This stuff is great fun, and for awhile it feels like we may be watching a new B-movie classic.

But then the exposition begins.  Without going into details, nearly the entire middle act of this film is comprised of expository flashbacks.  Yes this allows for a fun Shannon freak-out or two, but the film is filled to the brim with information that A) Wilee isn't privy too and B) we don't really need to know.  Furthermore, most of the information we do need to know (like what's in the envelope and why it's important) is revealed in present-time confrontations just before the finale.  The entire middle 30 minutes brings the movie to a literal standstill as we jump just a little bit back in time with one 'here's what happened beforehand' moment after another.  These scenes add precious little context and only serve to make us anxious as we wait for the chase to begin again.  And we wait and wait.  The characters are mostly amusing (Aasif Mandvi is great fun as the boss and Dania Ramirez straddles the line between supporting character and love interest) and the film comes to a satisfying conclusion, but if thrilling chases featuring bikes and cars are what you seek, you won't get nearly as much of it as you might be hoping for.

One can understand that the $30 million picture doesn't have the money to have anything resembling 'non-stop action', but what we get in the first act is so much fun that we feel cheated when the film basically tops out after its first two reels.  Michael Shannon is a hoot throughout, one of the year's best out-and-out villains, and the film works as an examination of a very specific sub-culture (those who of course work as bike messengers).  And while Wilee gives the usual 'I can't work a normal job/live a normal life because I have a need for speed' spiel, the film doesn't treat his ideology as automatically superior (Ramirez's character wants to have a more conventional life, and the film doesn't condemn her for it).  Moreover the film has a wonderful sense of geography and the authentic New York locations are an obvious boon.  In short, Premium Rush is an absolute blast when it's moving, but dangerously disengaging when it slows down or outright stops.  A bit more bike action mixed in the second act would have done wonders for the pacing, but the film still succeeds as B-movie entertainment.  Premium Rush may earn its mark as a 'B-movie', but it loses our trust by initially tricking us into thinking that we may be watching something more.