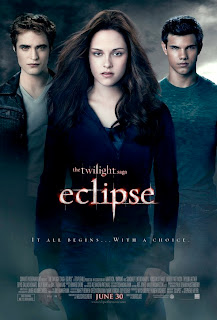 I'm probably one of six people on the planet who preferred Spider-Man 3 to Spider-Man 2. The second Spider-Man picture is arguably the better film. It's better written, better acted, and contains moments of real pathos and drama (Aunt May's birthday present to Peter, Peter confessing his role in Uncle Ben's death, the train action-scene, Peter's conversations with Doctor Octavius). Yet it is derailed by the fact that Peter Parker spends the entire movie in a swirl of self-pity, endlessly moping for the girl he loves, while forgetting the fact that he dumped her first at the conclusion of the first film (nevermind that most of his other problems have pretty obvious solutions - move in with Aunt May and take your Spider-Man photos to other newspapers for money, etc). The third film, by virtue of having three hundred subplots, focuses less on the annoying Peter Parker/Mary Jane romantic plot, and is less forehead-slappingly obnoxious despite the kitchen-sink plotting. So while the Twilight Saga: Eclipse is not as focused and disciplined as Twilight Saga: New Moon, I did enjoy it a bit more due to the plentiful distractions from the Bella/Edward/Jacob arc. It's not nearly as fun and light-on-its feet as the first Twilight picture, but it's a case of improvement-by-default.

A token amount of plot - Edward and Bella are back together, much to the chagrin of Bella's father (the again-delightful Billy Burke) and Jacob (the native-American/werewolf who helped her recover from being dumped by Edward in the last film). As Bella decides whether or not to become a vampire in order to be with Edward forever, an old threat rears her head. In order to avenge the death of her mate at the hands of the Cullen clan back in Twilight, Victoria (Byrce Dallas Howard replacing Rachelle Lefevre) is breeding an army of 'newborn' vampires (vampires are most powerful and out of control during their initial months after being turned) to kill Bella, wipe out the Cullen clan, and/or rampage their way into Forks, Washington. With a threat this severe, the Cullen clan will be forced to align themselves with the local Quileute tribe, who of course are also werewolves.

Obviously, there is a little bit more going on here than just a non-stop pity party for Bella. And, ironically, the character work ends up mirroring the Peter Parker progression as well. Mirroring Peter's struggle to win back Mary Jane in Spider-Man 2, Bella spent the second film drowning in self-pity after Edward dumped her. But in this film, she's got her man, so she's become a bit more of self-centered jerk. Just as Peter Parker became cocky and obnoxious once he got what he wanted, so too does Bella. This time around, she basically uses her desirability as a weapon, using Jacob's infatuation to make Edward jealous for no particular reason. And while Edward was merely a little creepy in the first film, and mainly absent in the second, here he comes off like a controlling, jealous, and easily angered obsessive. Yes, Bella generally doesn't stand for his overt 'protectiveness', but Eddie still comes off like a future domestic-abuser more so than the first two pictures. Our three leads are still relatively bland and not-terribly personable, so whenever the film focuses on their romantic plight, the picture becomes frankly a little dull.

Much has been written, by myself and others, about the theoretically terrible morals that this series teaches young girls about romance and self-esteem. But I will say that the film seems to almost be questioning, if not condemning, Bella's choice to leave behind her friends and family to live with her vampire boyfriend. Even Edward is very much against Bella becoming a vampire, and any number of characters (Jacob, Rosalie Hale, Bella's unknowing parents) make quite convincing cases for why she should not go on this path. It doesn't help that Bella slightly more chemistry with Jacob than with Edward, but of course the idea of her choosing neither of these men and simply going to college isn't even an option to her. Anna Kendrick's Jessica gets a valedictorian speech that all-but explicitly mocks the very story that has been told up to this point in the series. Point being, whether it's Stephenie Meyer's source material or director David Slade's directorial hand, Bella's single-minded pursuit of Edward is not presented as the picture-perfect that one might expect from a series that has been sold as wish-fulfillment fantasy.

As is the case with the prior two pictures, the film comes to life whenever someone other than Bella, Jacob, or Edward takes center stage. I wrote back in my Twilight review that I loved the supporting characters, and that still stands. By virtue of being about more than just Bella obsessing over Edward, this film allows said supporting cast to shine a bit more. A few of the Cullen family members are given flashbacks showing how they became vampires (Jackson Hale was turned while fighting for Texas in the Civil War, although Jackson Rathbone is not allowed to give his opinion on slavery). Bella's mother (Sarah Clarke) is given one extended moment of motherly warmth, and Sheriff Charlie again stands in for an uncomfortable audience as he helplessly watches his daughter disappear into the Cullen family (his 'sex talk' is highly amusing, and the pay-off is a corker). The problem is as it always has been with this series. The game lead actors (Kristen Stewart, Robert Pattinson, and Taylor Lautner) are forced to be relatively blank slates, so that the reader can imagine themselves as their favorite character, while the rest of the cast get to be distinct human beings (undead or otherwise).

Whether or not the film is 'better', it certainly is a more entertaining picture than the dreary New Moon. There are moments of (generally bloodless) violence, and there is a brief climactic action-blow out to satisfy carnage junkies. The film has superior production values and the period flashbacks combined with brief excursions into downtown Seattle add a bit of variety to the backwoods locales. It's still not 'big' enough to justify the IMAX upgrade, although the film's dramatic scenes are often shot in extreme close-up, so those that want ginormous and super-detailed looks at their favorite hottie might do well to pay the surcharge (everyone in this movie looks gorgeous and there is plenty of eye candy regardless of your sexual preference). The supporting cast is given more time to shine, and the Cullen family remains as entertaining as ever. The film's morality is just as awkward it has always been, but there are signs that the material isn't as regressive as it's been painted (regardless, I still think that our young girls can handle a little escapist fantasy and still keep their self-esteem). Like the Spider-Man series, this third film is less streamlined and less disciplined than the second entry, but the emphasis on the entire Twilight world vs. exclusively focusing on Bella's love triangle makes this entry superior entertainment. And like Rami's webslinging adventures, the first film is still the best.

The first film is the best? Now I know why I haven't seen the second and the third. ;)