Because sometimes the waiting is the best part... 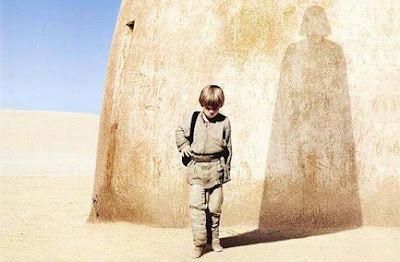 Yes, despite the mountains of coverage, oodles of fan web-sites, and millions of fans dying for a taste, Star Wars: The Phantom Menace is simply a movie. Yet, for fans such as myself, who plan on being there at the first showing on May 19th, it will be the culmination of sixteen years of anticipation. Over the past two years, where it became a reality that this film would actually be made as opposed to merely an arbitrary rumor, something became clear to me.  My excitement about May 19th is not about seeing the movie, nor is it about laughing out loud as it (hopefully) obliterates every box-office record known to man. My anticipation is not about the hope that the movie will actually live up to my expectations, because I know that it can not. Although all of these things will likely give me great bliss in the coming weeks, my 'joy' is something such simpler.

Read more »
Posted by Scott Mendelson at 10:23 AM No comments: Links to this post