Review: The House I Live In (2012) is an all-encompassing look at the national disgrace that is our 'War on Drugs'. 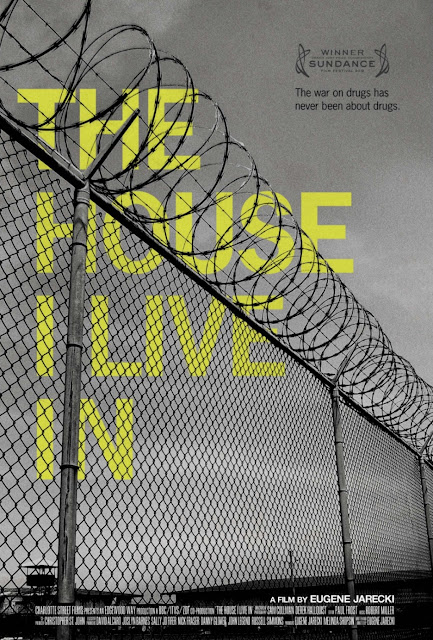 The House I Live In
2012
110 minutes
Not Rated
Available on various Video On Demand platforms January 15th, 2013

This won't take long.  Eugene Jarecki's newest documentary is a superb and comprehensive look at the last forty years of drug policy in America.  Oh it goes even further in time then that, but the focus is generally on the 1970s to the present, when the anti-narcotics crusade became the largest source of our current prison industrial complex.  There is little here that will be shocking or new to anyone who has been paying attention over the last few decades.  The value is this fine documentary is that it serves as a all-inclusive document of everything wrong that was and still is when it comes to our drug policies.  It can be argued whether or not a documentary of this nature, unlikely to be seen outside of the converted and perhaps a few not-yet converted during various special screenings, should be judged by its effectiveness in changing policy.  Whether or not it 'makes a difference', it is an important piece of non-fiction filmmaking, a shining light to one of the great shames of our country.


Jarecki leaves few stones un-turned, and he wisely lets those affected tell their stories and share their insights rather than become a part of the story or a mouthpiece for the outrage.  Again, if you've been paying attention the stories involving the racial legacy of drug prohibition won't be all-too surprising (IE - opium was delegalized because the Chinese used it, crack-cocaine carries stiffer penalties than powdered cocaine because African Americans were more likely to use crack in the 1980s, etc.), nor the tragic consequences of the Three Strikes laws.  It does highlight yet another wrinkle in the complicated moral legacy of Richard Nixon who, as the president who basically instigated the 'war on drugs' in his first term, made a point to emphasize, in both word and budgetary deed, the need for medical treatment and rehabilitation as well as criminal penalties (more than half of the funding provided was treatment-based).  It won't be a shock to hear about how hard it is for politicians to speak out against this for fear of being labeled 'soft on crime'.  It's all-too familiar to most to heard about the sheer might of the prison complex, which has made the mass-incarceration our citizens, many of whom are nonviolent, into an incredibly profitable enterprise.

And surely you've heard about how police departments make a point to arrest countless petty drug dealers and/or users in order to boost their arrest records, which in turn allows drug officers to get promotions that might otherwise go to cops who solve murders and rapes (and the whole civil asset racket is probably old news too).  Sadly much of this isn't news to you, but seeing the faces of real people victimized by this institutional genocide puts a human face on the statistics.  $1 trillion spent with drugs still remaining as cheap and easy to get as ever.  And thanks to America's desire to criminalize drugs, we of course have turned Mexico into a literal war zone (their drugs fought over with our guns, everybody loses).  Again, there sadly isn't too much that will shock you in The House I Live In, but the fact that we've taken so much of it for granted ought to shock your conscience.  What Jarecki's film provides, and what makes it the best documentary of 2012, is that it tells pretty much the whole horrible story in one tightly-edited and compactly-produced 108 minute package.

The House I Live In is a truly important piece of art.  It is an effortlessly angry rallying cry against a social policy that has done little more than criminalize an entire generation while destroying poor communities nationwide.  That the War on Drugs is a practical failure is obvious at this point.  That it is a moral failure should be obvious at this point.  The House I Live In serves as a stark reminder of that failure.  In that sense, it is a public service.

Grade: A
Posted by Scott Mendelson at 6:30 AM