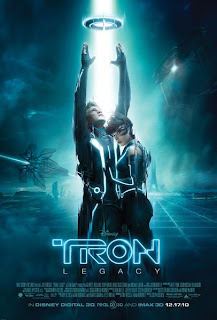 Tron: Legacy almost operates as a litmus test for how much we will tolerate in our tent-pole film making. Just how much bad dialogue, poor acting, inexplicable plotting, and emotionally-vapid characterizations will we accept as long as we've been convinced that the film is 'cool'? How little actual content will we demand in exchange for $300 million light shows disguised as motion pictures? We casually accept seemingly intentional mediocrity in our franchise films, from The Flintstones to Transformers: Revenge of the Fallen, holding our nose but making these films into smash hits. I am reminded of Patrick Stewart's monologue towards the end of Star Trek: First Contact. "The line must be drawn here. This far, and no further." If we as moviegoers accept this artless, soulless confection as a suitable example of big-budget filmmaking, then we deserve everything we get in the following years. The apparent absence of any attempt at quality renders even the (only occasionally) pretty pictures impotent and dull. And make no mistake; Tron: Legacy is a stunningly dull would-be movie.
A token amount of plot: Sam Flynn (Garrett Hedlund) is the only son of Kevin Flynn (Jeff Bridges), a revolutionary computer programmer who disappeared over 20 years ago after claiming to be on the cusp of a world-changing discovery. The younger Flynn spends his time living more-or-less off the grid and occasionally sabotaging his father's former company, which has been turned into a mega-corporation in his father's absence. After inexplicably receiving a message from his father's long-abandoned office, Sam uncovers a portal to an alternate universe that his father created, a virtual reality where programs compete in gladiator games to the death, and the secrets of Kevin Flynn's legacy are waiting to be unearthed.
On the plus side, one does not have to have seen the original 1982 Tron to view this sequel. There are a few token nods to the original film (including a guest star in a quick cameo as the son of David Warner's original villain), but the picture stands on its own with helpful dollops of exposition to initiate the uninformed. Alas, that is one of the few bright spots to be found. The plotting is shallow and occasionally incoherent, with blatant thefts of everything from Star Wars to Batman Begins. The plot, such as it were, involves a malicious program (Clu, also played by a digitally de-aged Jeff Bridges) that yearns to escape into the real world after conquering 'the grid'. But the dialogue is so clunky and the acting is so inexplicably broad that we realize that very little storytelling has occurred between the opening set-up and the half-hearted action climax.
Even Jeff Bridges is weirdly off of his game. Clu hems and haws like a 1980s Legion of Doom reject, and the CGI makes Bridges look like a character in one of Robert Zemeckis's motion-capture cartoons. He even comes with an emotionally-needy sidekick in the form of James Frain's Jarvis, who serves mainly to explain the machinations without actually offering any information. Bridges-as-Flynn can't seem to decide how seriously to take all of this, often doing a slight nod to 'The Dude'. A big problem comes in the form of Hedlund. Not only is his obnoxious, pointlessly cocky hero genuinely uncharismatic, but Hedlund delivers the kind of bad performance that feels edited around, as if director Joseph Kosinski knew that his central bit of casting was a botch (his line readings and his facial expressions both merit unintentional chuckles). Olivia Wilde plays a companion of sorts to Kevin Flynn. While she exists mainly as doe-eyed boy bait (mission accomplished) and a love interest for Sam, her character gets a few humorous moments as she discusses her desire to see the outside world. Michael Sheen briefly shows up with a campy and obnoxious riff on Merovingian from The Matrix Reloaded.
But, say you, one doesn't pay to see Tron: Legacy to be concerned about horrible acting, sloppy plotting, and inexplicably lousy dialogue. One goes for the visual fireworks and high-tech action, right? Well here's the kicker: Tron: Legacy is an ugly looking film with very little action. While the trailers highlight moments of neon-lit fantasy worlds and eye-popping designs, the majority of the film exists in a cloudy, muddy haze. The colors on the various uniforms stand out as a contrast to the murky grays, blues, and blacks that make up the video game world. Heck, even my wife remarked that it resembled a black-and-white film, and not in a good way. Much of the last two acts seem like they were shot inside John Carpenter's The Fog. As for the 3D, it is frankly only a little more impressive than any given post-conversion film released over the last year. Sure, the 3D is noticeable, but there is so little action that it barely serves any purpose.

Speaking of action and/or adventure, most of what you get has already been revealed in the previews. There are two notable action sequences around the thirty minute mark, including an admittedly dazzling motorbike chase that nonetheless feels stolen from Spy Kids 3D: Game Over. After that, the film slows to a crawl with nearly an hour of useless exposition and anticipation of action that rarely if ever arrives. There is a brief skirmish that closes out the second act, including one fight scene that, I kid you not, takes place entirely off screen. The big finale is visually impressive, but is at least partially cribbed from the two main space dog-fights from Star Wars. In the 125-minute movie, there are perhaps 15 minutes worth of action sequences taking place in the 'Tron universe'. The rest of the last two acts consist primarily of watching Jeff Bridges (good version and bad version) argue about how to prevent Jeff Bridges (good and bad version) from succeeding in his respective goal.
Had the film delivered on a visual level, one might excuse the utter lack of anything resembling attempted quality in the more artistic areas. But not only does Tron: Legacy fail as a screenplay, an acting exercise, and a drama, it fails miserably as an exciting piece of science-fiction and as an action-adventure. The video game visuals wear out their welcome after the first half-hour, as little of interest actually occurs in this world, and most of the scenes lack beauty or even color. The plot is of no interest, as nothing that happens inside the computer world is of any consequence to the outside world (the overriding story is basically 'escape from the Grid'). With little action, a genuinely unpleasant visual palette, and nothing else to hold our attention, Tron: Legacy is one of the duller blockbusters in recent memory.
What's disturbing about this picture is its shortcomings are so apparent that it appears to be wearing its flaws like a badge of honor. Like certain politicians and pundits who take pride in their ignorance, as if its a sign that they are 'just like regular folks', Tron: Legacy basically dares us to accept a film with almost nothing of value, because we've been told that it's the next big thing. Its sheer laziness on every level feels like a cynical experiment, a way to test if audiences will bite at anything that has enough special effects and marketing dollars thrown at it. Most bad movies make me a little sad. Tron: Legacy made me angry. It is one thing to try and fail, but those behind this would-be franchise starter seem almost proud that they failed to even try.
Grade: D-
Posted by Scott Mendelson at 10:29 PM

I was slightly worried about the target audience of this....now I worry about the film.

Hmm, such mixed reviews... I don't know how reviewers can be so opposite on their reviews. Some people say mind-blowing after seeing this film. Especially after seeing it in Imax 3D. It sounds obvious that the reviewer has never seen the original.

I was actually expecting you to like this film since you're the same person who believes "Bolt" and "meet the Robinson's" are great pieces of filmmaking. Was I wrong or were you really in need of some attention/street cred?

Bolt was good, not great. The opening action sequence is dynamite and the finale is quite strong. As for Meet the Robinsons, I've said any number of times that it's one of those movies (like Shanghai Knights and The Mask of Zorro) that I happen to love more than anyone else on the planet.

As for attention/street cred, if I could accurately predict the things that would get me attention or 'creditability', I'd probably have a lot more readers.

Bridges is enjoyable as he gives the older Flynn a Zen hero quality, and even breaks through the effects to make his younger-Clu-self oddly engaging.This is nice blog to watch tron legacy online...............

Wow. What a biased review. As a fan of the original I found legacy to be a great movie. There were some seriously breathtaking moments. Much more breathtaking than Avatar or other 3d releases. I am still psyched to see it again and dread not being able to see it in IMAX again.

Reviews are by definition subjective and biased.

Bridges is enjoyable as he gives the older Flynn a Zen hero quality, and even breaks through the effects to make his younger-Clu-self oddly engaging.This is nice blog to watch tron legacy online...............

I was actually expecting you to like this film since you're the same person who believes "Bolt" and "meet the Robinson's" are great pieces of filmmaking. Was I wrong or were you really in need of some attention/street cred?

I was slightly worried about the target audience of this....now I worry about the film.