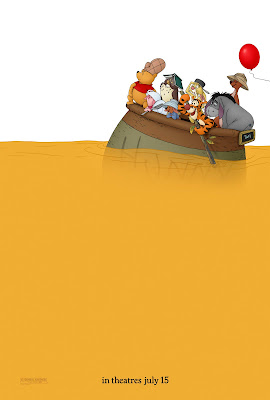 This won't be the longest review I've ever written, as there is little to say other than a list of tempered superlatives.  Winnie the Pooh is exactly what a Winnie the Pooh movie should be, no more and no less.  It is quaint, gentle, subtle wicked and as cozy as a blanket just out of the dryer.  Running just under an hour after a five-minute short film (a surprisingly poignant fable involving a homeless dragon) and before the closing credits, the picture is a perfect introduction to the age-old Pooh mythology to a generation raised on somewhat more complicated and more visually frantic cartoons of our modern times.  It is beautifully animated with lush, but simple, 2D hand-drawn animation, with eager vocal performances to go with it.  If you're merely in the mood for a harmless but intelligent and thoughtful family cartoon to bide the time between Pixar and DreamWorks epics, it is as perfect a choice as can be imagined.  If you are a genuine fan of Winnie the Pooh, well, imagine you're a Batman nerd walking into The Dark Knight...

A token amount of plot: Eeyore has lost his tail, and his Christopher Robin and his friends create a contest to help replace it.  In short, whomever finds a new tail for Eeyore wins a jar of honey.  That is the driving narrative, with a few detours along the way.  Pooh is obsessed with honey, Eeyore remains depressed and pessimistic, Tigger is an overeager ball of unhelpful helpfulness, and Owl remains ever the know-it-all.  Save for a brief story told with what looks to be chalk animation, the film looks and feels like a comparatively big-budget extended episode of a Winnie the Pooh television show.  The clean and simple visuals give way to genuinely imaginative narrative techniques, as both the narrator and the very text of the original storybooks become storytelling tools for our heroes.  There is a scene involving our heroes and a large hole that has some of the cleverest and laugh-out-loud funny verbal humor I've seen this year.

Directors Don Hall and Stephen Anderson (the duo behind Meet the Robinsons) have crafted a loving and genuinely entertaining fable, complete with several low-key songs (at least a few of which were written by Zooey Deschanel), poignancy, and heart.  It does not have the cutting-edge visuals of Wall-E or Cars 2, nor does it have the pathos of Toy Story 3 or Kung Fu Panda 2.  It is simply a darn good cartoon that honors the legacy that Winnie the Pooh has created over the last several decades.  It is family-friendly without being dumbed-down, thoughtful without being morose, and mature without being 'adult'.  It has an innocence and sweetness that goes down easy, and the picture feels like a warm hug from whatever stuffed animal you happen to treasure as much as one Christopher Robin treasures his furry friends from the One Hundred Acre Woods.

Note - For the record, my 3.75 year old daughter sat with rapt attention throughout, rarely talking and occasionally laughing.  She was a little unnerved at a brief detour into a dark forest, but she perked right up as soon as she saw sunlight.  I'd tell you what her favorite part was, but she liked the very end best of all, so that would constitute a spoiler.
Posted by Scott Mendelson at 4:03 PM

Sounds like a spot on review for a movie that knows what it is and will deliver. "Feel good" is necessary in the world we inhabit today. TGIW!

Sounds like a spot on review for a movie that knows what it is and will deliver. "Feel good" is necessary in the world we inhabit today. TGIW!