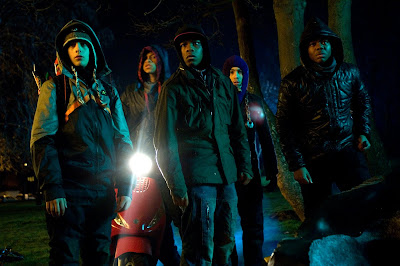 Meanwhile, a little farther down the chart, the much-anticipated and raved-about by geek critics Attack the Block was released on just eight screens by Screen Gems, with respectable results.  The film earned $130,000 for a solid $16,307 per-screen average.  Of course, this means little in terms of the film's mainstream play ability, and I do not yet know the expansion plans for the British alien invasion import.  But every movie geek on my Twitter feed has been begging everyone else to see this one.  As for me, I'm hoping that it goes to the much closer Arclight Sherman Oaks next weekend (as opposed to the much farther Arclight Hollywood).  I'm also a little nervous about those allegedly thick British accents, as I'm a little hard of hearing and am debating on waiting for the subtitled-DVD.  But for those unafraid of accents, everyone I know seems to have really enjoyed this one.  Also debuting in limited release was The Devil's Double ($95,000 on five screens) and The Guard ($80,000 on four screens).

In bad news for good movies, Captain America dropped a rather hefty 61% in its second weekend, almost as much as the much-loathed Green Lantern (-66%).  The terrific comic book adventure grossed $24.9 million in its second weekend and finished its tenth day with $116 million, or $3 million behind Thor's respective ten day gross of $119 million.  To be fair, Captain America had stronger weekdays than Thor, as the Asgard fable opened in early May.  But the Steve Rogers pic had a second weekend of nearly $10 million less, and a larger second weekend drop than Thor (-47%) and X-Men: First Class (-54%).  It does mean that the film will likely end up closer to Kung Fu Panda 2's current $161 million total than Thor's current $180 million total.  In better news for good movies, the final Harry Potter film crossed two very notable landmarks this weekend.  On Sunday, Harry Potter and the Deathly Hallows part II crossed $1 billion worldwide, tying Avatar as the fastest film to reach said milestone.  It also film sits at $318 million in domestic grosses as of today, thus surpassing Harry Potter and the Sorcerer's Stone as the biggest-grossing Harry Potter film in domestic sales as well.

There's not much else to report in holdover news.  Bad Teacher and Horrible Bosses are both at $96 million and both should cross $100 million in the next couple weeks.  Transformers: Dark of the Moon should be joining the $1 billion club in the next couple weeks, as it now sits with $337 million domestic and $982 million worldwide.  Kung Fu Panda 2 crossed the $600 million mark worldwide, now number five on the all-time Dreamworks animated list behind Kung Fu Panda ($631 million), Shrek Forever After ($752 million), Shrek the Third ($799 million), and Shrek 2 ($919 million).  Finally, Bridesmaids is now over $165 million and sits as the seventeenth-biggest grossing R-rated film domestically.

Email ThisBlogThis!Share to TwitterShare to FacebookShare to Pinterest
Labels: Attack the Block, Box Office (Weekend Rundown), Cameron Diaz, captain america, Harry Potter and the Deathly Hallows, Rise of the Planet of the Apes, Ryan Reynolds, Transformers Dark of the Moon

You do know it's called Attack THE Block, right? Attack OF THE Block sounds like the flagship show on G4 UK, hosted not by Kevin Pereira and Candace Bailey but by some nerd with jack-o-lantern teeth and an anonymous Page Three girl.

Attack the Block is a great little film, and I did a lengthy post about it over on my blog (http://bit.ly/nmBMAq). Nice blog, by the way. I first took notice of your blog when you did a piece about why The Dark Knight is hardly a right-wing movie.

Gah! You'd think someone would have pointed that out earlier... Thanks.