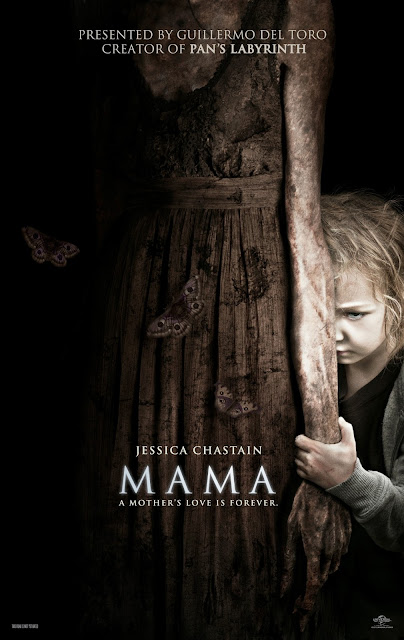 There is potential for an absolutely fascinating character study hidden within Andrés Muschietti's Mama, but unfortunately the film feels content to follow the road oft-traveled in its genre.  The film's first ten minutes or so are absolutely superb, and the opening credits are among the best in rest years, if only for how succinctly they offer copious exposition in a way that is downright chilling in its simplicity.  In a sea of remakes and franchise reboots, it is indeed admirable that Mama attempts to tell an original horror story, and I'd be lying if I didn't say that it's often quite creepy.  But the real-world horror that we are presented with is actually scarier and far more disturbing than the supernatural elements at play, which puts the viewer in an odd position of wanting less horror and more drama.  The picture is well-acted and contains a few genuine surprises during its relatively brief 100 minute running time.  But the film somewhat hampers its intentions by coming out of the gate so strong that what it offers for much of its running time is merely the wrong kind of horror.

The picture opens with a heartbreaking story that quickly turns two young girls (Megan Charpentier and Isabelle Nélisse) into orphans.  Aged three and one, the two young children find themselves living completely alone in an abandoned cabin for five long years before they are discovered by happenstance. They are taken in by their uncle (Nikolaj Coster-Waldau) and his girlfriend   (Jessica Chastain), the latter being not too thrilled to be tasked with playing 'mother' to two young children who have basically become feral animals.  The stage is set for a fascinating psychological drama, as the young girls do or do not come out of their shell under the eager care of Uncle Lucas and the less eager Aunt Annabel.  There is of course a somewhat scheming psychologist, who sees these children as his ticket to professional acclaim, although Daniel Kash wisely plays down any nefarious intent.

But that film never really transpires.  The film quickly doesn't just become a supernatural ghost story about what the children may or may not have brought back with them, but a rather generic one at that.  Furthermore, plot mechanics soon put the film's focus squarely on Aunt Annabel, so we spend much of the middle hour of the film watching two children barely interact with an uninterested and unwilling caregiver while jump scares and spooky imagery occasionally occurs. For reasons that never pay off in the narrative, we lose out on the idea of an uncle who has spent five years searching for his missing nieces now struggling to be a surrogate father.  It would be unfair to reveal much more plotwise, but I will say that the film tips its hands much too early, basically flat-out revealing the big secret well before the major characters are supposed to catch on.  The idea of these incredibly traumatized children attempting to regain some sense of humanity is barely touched upon, as we spend far more time waiting for random loud noises and the occasionally clever visual trick.

To be frank, I didn't care about the underlying secret of the supernatural occurrences, or at least I wanted to see how said horror elements interacted with the very real and relatable family drama.  Furthermore, we have a number of scenes where adult characters witness what is clearly supernatural phenomena yet don't bother to tell those around them. A subplot involving another aunt who wants custody of the children is wasted, and anyone watching the film can't help but wonder if she indeed would have been the better caretaker for these 'special needs' children.  All of this is unfortunate because there is much about Mama that works like gangbusters.  The film goes to some horrible places, and it has an ending that not only surprises but offers a definitive end to this specific story (IE - no sequel teases, thank you much).  Chastain and Coster-Waldau do their best to give depth to relatively two-dimensional characters and the young actresses do quite a bit with very little.  There are a number of effective scares and those merely going for a bruised-forearm movie will unquestionably be satisfied.

Andrés Muschietti's Mama deserves to be seen, both as a genre exercise and as an original work of horror in a time of reboots.  However its obsessive need to play by the haunted house playbook undermines the wonderful story that it painstakingly sets up for its first half-hour.  The real-world tragedy that opens the film is arguably scarier and more horrifying than any ghost or demon that might haunt our lead characters, and the film almost errs by being too ambitious in its early reels only to regress into convention.  It does however bounce back at the very end, delivering a heartrending and satisfying pay-off that I won't even hint at here.  I wish the film was less generous with its jump scares and I wish it had less scenes where a seemingly smart person investigates a possibly haunted locale in the very dead of night instead of waiting until mid-afternoon.  I wish the film trusted its story enough to let it breathe, which in turn would have made the horror elements even more powerful when they periodically reared their ugly heads.  But Mama is indeed a haunting cinematic experience, and it's tough to not recommend for genre fans.  It's cardinal sin, if not its fatal one, is that its real-world story is both more interesting than its gothic one.  It's much scarier too.