Review: Sherlock Holmes: A Game of Shadows (2011) entertains, intrigues, and amuses, but becomes too frantic for its own good. 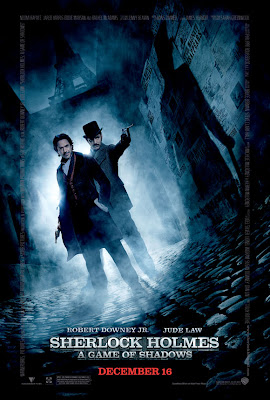 There are times when this second Guy Ritchie-helmed Sherlock Holmes adventure threatens to become what the first film was advertised as.  The first picture, if you recall, was marketed as an all-action, all-comedy, huge tent-pole adventure that just happened to feature the world's most famous detective (teaser and trailer).  In fact, the 2009 Sherlock Holmes (review) was an often quiet and contemplative character piece, a genuine mystery drama that had moments of big budget spectacle.  This new film tries its hand with the 'bigger is better' philosophy, to varying degrees of success.  The action is more frequent and of a larger scale, and the characters are less mournful and introspective this time around.  But what's lost in the fury and bombast is gained with an upping of the stakes, both personal and external.  Oddly enough, the highlight of the last picture, the relationship between Robert Downey Jr and Jude Law, becomes almost a distraction this time around, taking time away from what should be the primary attraction - the battle of wits between Sherlock Holmes and Professor James Moriarty.

A token amount of plot - It's been at least several months since Holmes and Watson took down the evil Lord Blackwood, and they have been on separate paths since then.  While Watson spends time with his fiancee and prepares for his upcoming wedding, Holmes has been trying to pin evidence on a respected math professor who has allegedly been mounting a secret reign of murder and terrorism all over Europe.  When a reunion with Irene Adler (Rachel McAdams) yields a new lead, Holmes and Watson reluctantly end up joining forces yet again to stop the evil Professor Moriarty (Jared Harris) before his sinister machinations threaten to destroy all of western civilization.

I'm being vague in the above plot description as there are at least a few decent plot twists along the way.  While it opens with a splendid ten-minute prologue which introduces and establishes the new menace, the film loses its way for much of its first act as it reunites Holmes and Watson even as neither character really seems to want to be in the other's company.  While Downey Jr and Law's verbal sparring provide token amusement, their friendship has not developed past where we left them and does not develop over the course of the narrative, meaning that much of their screen-time (and they have much together) is spent with consequence-less bickering.  On the plus side, the film does poke explicit fun at those who saw the first film as some kind of closeted-gay romance.

Ironically it is the supporting characters who provide most of the entertainment value this time around.  In her comparatively brief screen-time, McAdams exhibits far more personality and roguish charm in her few moments here than she did in all of the previous film (freed from the constraints of being the de-facto love interest, McAdams relishes the chance to go full-villain).  Kelly Reilly, as Dr. Watson's new wife Mary, gets a slightly beefed-up role this time around, and she gets at least one moment of completely unforced bad-ass.  Stephen Fry exists purely for comic relief as Mycroft Holmes, Sherlock's brother.  Ironically it is the official female lead, Noomi Rapace, who fares the worst.  Given no discernible charm or personality and no real purpose to the plot other than the 'we have to have a girl around' meme, Rapace bores and distracts as a gypsy whose brother may be working for Moriarty.

Of course the new character everyone will and should care about is Professor James Moriarty, portrayed this time around by Jared Harris.  Whether by accident or by design, Guy Ritchie took a chance casting a genuine character actor as the granddaddy of all arch-villains, rather than snagging the biggest star who would say yes.    And while Harris delivers a fine and malicious performance (even if he ends up looking like Conan O'Brien with his thick red hair and bushy beard), he is severely underused.  The primary arc of this film should be a battle of mental wits between Holmes and Moriarty, yet the murderous professor is absent for large chunks of the story as we focus instead on Holmes and Watson bickering, finding a reason for Rapace to stick around, or the generally gratuitous big-scale action sequences.  Harris delivers the goods in spades, but one wonders if casting a bigger star would have compelled Ritchie and company to give their primary villain more screen-time.  As the bullets fly and explosions tear up the scenery, one spends much of the middle of the film waiting anxiously for another delicious encounter between hero and villain.  To be fair, there are three major confrontations, and all three are among the best scenes in the film.

Speaking of action, there is far more kaboom this time around.  Not even counting the occasional bombs that Moriarty sets off as part of his grand scheme, the film is filled with fist fights, gun fights and explosive chase scenes.  None of these moments are very impressive, although the smaller-scale duels (such as a moment where Holmes ropes himself to an assassin and uses the rope to his tactical advantage) are more impressive than the bigger action beats.  The time spent on these relatively generic action sequences could be better spent  on Holmes doing what he does best.  There are moments of deduction, but they felt fewer this time around and less important to the grand scheme.  Although either the film plays more fair or I'm smarter than I was two years ago, because I actually picked up on a few bits this time around (I noticed a detail that turned out to be a massive clue to big picture).  What is missing is an overwhelming sense of danger and a reaction of the masses to the massive damage that Moriarty causes in the run-up to his grand designs.  The idea of a genuine super-villain striking in secret in a society completely unable to comprehend this at-the-time foreign concept is a rich one, but it's sadly left unexplored.

As pure popcorn entertainment, Sherlock Holmes: A Game of Shadows delivers the big-budget goods, even as it almost sacrifices its worth as a film to do so.  With a villain worthy of time in the spotlight and an evil scheme that is both something out of a James Bond picture and subtly relevant to the last decade of geopolitical history, Ritchie had the material to make something a bit deeper and grander than the somewhat hollow blockbuster that he has constructed.  Still, the opening and closing reels are superb, and the climax is so frighteningly appropriate to the characters and the franchise that I almost applauded when it took shape.  The epilogue flirts with ending on a courageous note before copping out at the last moment.  But those who enjoyed the 2009 Sherlock Holmes as another big-budget genre franchise that was a bit more literate will find less to complain about this time around.  But those who actually wanted a sequel that too felt like a Sherlock Holmes adventure may be a little disappointed, although the exquisite BBC series Sherlock may concurrently serve that purpose.  By emphasizing action and generic adventure over the engaging characters at its center, Sherlock Holmes: A Game of Shadows sacrifices its queen to spare its rook.

So am I correct in thinking If I didn't enjoy the first one, I won't be enjoying this one? If so than I guess its Ghost Protocol for me next week.

God, this sounds like Iron Man 2 all over again. And I had high hopes for Sherlock 2 because I was genuinely surprised by the first film. Does RDJ have a problem with sequels or what?