In the 'what were they thinking?' department: the Salt soundtrack. 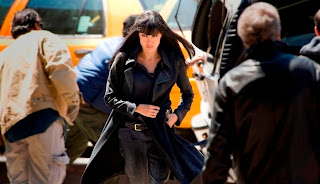 Salt is pretty much what it is advertised as, a mid-to-late 90s throwback, a star-driven action thriller that uses its alleged real-world narratives (including an accidentally topical plot involving Russian spies) to obfuscate its patented absurdity. The picture shines in its first half, but plummets in its second when its plot goes from almost plausible to completely nuts. Simply put, the film would have been far more effective if the stakes were not so 'the whole world is at stake' high. When the plot centers around an attempted assassination of a foreign dignitary and the possible revelation of Russian spies in the CIA, there is a certain real-world plausibility that also helps create suspense. Point being, said foreign national might actually get killed during the course of the picture, but we're pretty sure that (being vague to avoid spoilers) the entire world is not going to be thrown into irreversible chaos, especially at the apparent hands of some pretty big movie stars. This isn't Dr. Strangelove or Fail Safe, it's a $75 million popcorn genre thriller starring one of the last remaining bankable action stars on the planet. But, warts and all, the film remains a pleasantly diverting B-movie. I imagine it will play smashingly on TNT for a Sunday afternoon matinee. But that doesn't excuse one of the most boneheaded soundtracks I've heard in a long time.

At least twice in the film that I heard, once in an action sequence at the climax of the second act and once at the very end of the movie, the score literally turns into the Inspector Gadget theme song. First off, we have a scene of Jolie's Salt skulking around and ruthlessly dispatching her enemies in slow-motion, but bloodless carnage. While Jolie shoots and blows up her foes, the soundtrack literally has a choir of some kind start chanting the characters name. Yes, that's right, the soundtrack literally has someone chanting "Salt! Salt! Salt! Salt!" as the alleged double/triple/quadruple agent goes about her killing business. I'm not sure who thought this was a good idea, but I defy anyone viewing this picture not to burst into giggles as they realize that this dead-serious political action picture has actually written a theme song more at home in the Adam West Batman TV show. It happens again right at the end of the picture, and it's every bit as head-slappingly funny there. I'd love to know what composer James Newton Howard was thinking, because even the cheesiest 1980s action picture never had the gall to throw in a theme song right-smack in the middle of the movie. It's an awesomely dumb moment and an otherwise inoffensively dumb picture.

I don't think the choir is chanting Salt - it's not what I heard - I heard chanting but I couldn't really make out what was said. I think that piece might be by Faure but I'm not positive.