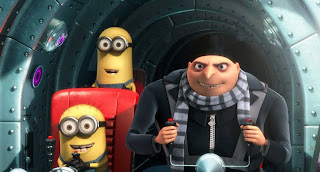 It was an 'everybody wins!' weekend at the box office, as the openers all performed at or above expectations and the holdovers didn't quite crash as badly as expected. First off, Universal scored its first probable domestic blockbuster since The Bourne Ultimatum three years ago, and its first animation smash since, I dunno, An American Tail: Fievel Goes West, with Despicable Me. Opening with $56.3 million, the film had the sixteenth-largest opening weekend for an animated feature ever. It is the tenth-largest opening for a non-sequel cartoon, with six of those openings coming from Pixar alone. Say what you will about the 3-D price-bump, but this is nearly double the opening of Cloudy With a Chance of Meatballs and about four times the opening weekend of Coraline. It is a case of almost instant profitability for the $69 million production.

Bolstered by rock-solid reviews, the film had saturation-level marketing and a multi-quadrant ad-campaign. The super villain vs. super villain narrative and celebrity casting appealed to older audiences, while the orphan children and little yellow henchmen (minions) worked like gangbusters to bring in the young kids. And, after weeks of 'you don't REALLY need to see this in 3-D' reviews for films both great (Toy Story 3) and terrible (The Last Airbender), the Despicable Me reviews emphasized that the 3-D was actually worth the surcharge this time around (ironically, only 45% of the tickets came from 3-D auditoriums). The film received an 'A' from Cinema Score and played 55% to kids under 12 and their parents. There has never been an animated film that grossed $200 million not released by Disney or Dreamworks. Despicable Me could be the first. Point being, this is going to be a massively profitable venture for Universal and a big win for their often-lambasted marketing department.

If Despicable Me was a lesson about smart budgeting (not every major animated film needs to cost $150-200 million), then Fox's Predators was a lesson in frugal, pinpoint marketing. While most moviegoers didn't even know this movie was even coming out until a week or two ago, Fox unleashed their targeted marketing campaign just a week before the release date, and the result was a $24.7 million opening weekend without the usual $50-100 million six-month marketing tsunami. Budgeted at just $38 million, the Robert Rodriguez-produced sequel capitalized on nostalgia for the 1987 original (not so much the LA-based 1990 sequel) as well as being a hard-R genre picture in a sea of PG-13 mass entertainment. Amusingly, the $25.3 million opening weekend is almost identical to the inflation-adjusted opening for the original Predator ($12 million in 1987, $24 million in 2010 dollars). I've said this over and over again, but all manner of films with all manner of ratings can exist and be profitable if you can budget reasonably and not spend the farm on marketing. After all, at the end of the day, most moviegoers decide what to see on Friday based on what trailers or posters they spotted on Wednesday or Thursday. The earlier stuff is generally aimed at the fans who were already planning on seeing said picture regardless.

In limited-release land, the Julianne Moore/Annette Bening/Mark Ruffalo drama The Kids are All Right had a scorching debut, grossing $491,971 on just seven screens. The $70,282 per-screen average is the 27th-biggest in history, as well as the second-largest for a film playing at seven or more screens (Precious pulled in $104,025 per screen on eighteen screens last November). The Girl Who Played With Fire grossed $904,998 on 110 screens, for a $8,380 per-screen debut. I personally thought this opening would be larger, as the prior entry The Girl With the Dragon Tattoo grossed $7 million during its Spring release. But the film has already pulled in $52 million worldwide, so no tears on this continent. Grease: Sing-Along Re-Issue pulled in $60,759 on twelve screens, so we'll see whether or not Paramount expands this experiment in the coming weeks. In a summer with several moderate indie breakouts such as I Am Love, Solitary Man, and Joan Rivers: A Piece of Work), the two big indie success stories continued to expand. Cyrus expanded to 200 screens and entered the top ten with $1.28 million. The $7 million comedy has grossed $3.4 million thus far. The top-notch rural thriller Winter's Bone has now surpassed its $2 million budget, ending the weekend with $2.5 million thus far.

In holdover news, the weak Sunday (July 4th) kept the drops too severe. As expected, Grown Ups and Knight and Day are the 'I wanna go to the movies but have already seen the mega-films and don't have an art house cinema nearby' choices, as they dropped just 17% and 26% respectively in their third weekends. Grown Ups became Adam Sandler's eleventh film since 1998 to cross the $100 million mark ($110 million thus far), while the Tom Cruise/Cameron Diaz thriller has grossed $61 million thus far ($100 million worldwide). Most surprisingly, last weekend's big openers didn't bleed out nearly as much as expected. Twilight Saga: Eclipse dropped just 51% in weekend two, far less than the 62% drop for Twilight and the 70% drop for New Moon. The teen-lit sequel ends its second weekend with $235.3 million, and it has a decent chance at out-grossing New Moon ($296 million) and crossing the $300 million mark.

The Last Airbender held off critical and audience discontent to drop just 58% in weekend two. That's quite a bit, but considering the word of mouth, many were expecting a 70% or more second-weekend plunge. The M. Night Shyamalan fantasy picture has grossed $99 million by its eleventh day, and it will become M Night's third-highest grosser by next weekend (The Village grossed $114 million in summer 2004). Yay? Continuing to take few prisoners, Toy Story 3 held off the mammoth debut of Despicable Me and fell just 30% in its fourth weekend. With $22 million for the weekend, the best movie of the year is now the highest-grossing film of the year, with $339.2 million in domestic sales. Of note, the film will surpass the $339.7 million gross of Finding Nemo on Monday to become the highest-grossing film in Disney history and the 17th highest-grossing film of all time in the states. Assuming it can hold off screen-bleed when Disney's The Sorcerer's Apprentice and Warner's Inception blow into town next weekend, $400 million is a pretty likely milestone at this point. As far as worldwide numbers, the film has grossed $553 million globally, with the $867.9 million global gross of Finding Nemo in its sights as it expands around the world.

That's about all the news that's fit to print this weekend. Wednesday brings us the Nicolas Cage fantasy, The Sorcerer's Apprentice. Friday brings one of the most buzzed-about movies of the year, Chris Nolan's Inception (I'll hopefully be seeing it on Tuesday). Box office predictions for the latter are all over the map, but just remember that no film not based on a preexisting property has ever opened over $77 million (Avatar), Leonardo DiCaprio's biggest opening weekend is the $40 million debut of Shutter Island, and Chris Nolan's highest-grossing non-Batman picture is the $67 million-grossing Insomnia. I want to love it and watch it crush the box office too, but please keep some perspective. Oh, and all of those Matrix comparisons? The Matrix opened with $27 million back in Spring 1999. Until then, keep reading and take care.