Review: Hobo with a Shotgun 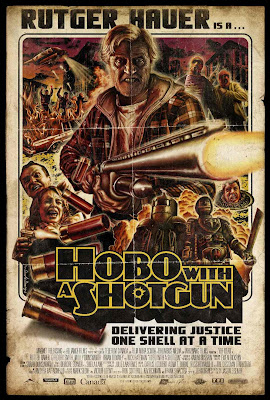 It's a cardinal rule of mine to always critique the film that is presented in front of me, and not the film I wanted to see. It doesn't matter if the what-if? scenarios in my head for The Matrix Revolutions were more interesting that what ended up being made, I can only judge the film that was released as it was released. So I walk a tightrope when discussing Jason Eisner's Hobo with a Shotgun. The film basically delivers what it promises, with hardcore schlock possessing a genuine 1970s grindhouse sensibility and horrifying violence to match. But the picture is so relentlessly over-the-top and lacking in any real subtext or 'point' that the film becomes just a glorified snuff film. But there remains such potential for a genuinely compelling social critique that I cannot help but think of the slightly less extreme but more relevant film this could have been.

A token amount of plot: 'Hobo' (Rutger Hauer, in a performance that deserved a better movie) is just another wandering homeless man who walks the street begging for sustenance. He dreams of buying a $50 lawnmower and starting his own lawn care business, but the city he lives in is ruled with an iron fist by the local crime boss and his crazed sons. When the moment of achievement arrives, 'Hobo' chooses not to buy a lawnmower but rather a shotgun, which he then begins to use to clean up the scum of the city. But the local organized criminal element will not take this vigilantism lying down, and blowback immediately turns the entire city against its homeless population.

If all you want is outlandish violence, then you'll get your money's worth. The movie is filled with gore-filled killings and blood-drenched carnage, admittedly presented with a delicate balance of realism and winking absurdity. The film is bathed in the sun-drenched, hyper-real sensationalism most attributed to the exploitation pictures of a bygone era. But the tone of the film is so absurdist and the acting (with the exception of Hauer and female-lead Molly Dunsworth) is so arch that it becomes less of a real movie and more like some kind of film school experiment, which of course it basically is. As some of you may know, the film began life as a trailer, an entry into a 'make a grind house movie preview' contest set up to promote the release of Grindhouse four years ago. The film really exist primarily as yet another homage to itself, a variation on a bygone genre which only the filmmaker and some of us film nerds really remember with any clarity.

As Hauer's thoughtful and sympathetic performance indicates, there was potential for much more than a parade of 'so shocking it's quaint' violence (there is, to be fair, one genuinely outrageous moment involving a flamethrower). The idea of a homeless man becoming a vigilante in the real world, not the stylized and hyper-violent landscape presented, presents the potential to be a real movie with real thought and commentary. A similar film, but toned down to the point of realism and plausibility, taking place in this era, a time of economic inequality and recession-fueled fear, is one rife with potential for social commentary. There is a heartbreaking monologue towards the end, where Hauer basically talks about the tragedy of growing up in a place without hope while he stands in a nursery full of newborn babies. It's easily the best scene in the film, and it hints at the challenging and potentially unsettling film that could have been made. But Hobo with a Shotgun is too concerned with giving gore-hungry splatter-heads a trashy good time to bother with actually having something to say.

For the record, the film that Jason Eisener, along with writers John Davies and Rob Coterill, has made delivers on its schlocky promises. You want Rutger Hauer unleashing hell in a desolate and crime-filled war zone while blood covers every inch of the screen? You get exactly that, but precious little more. Hobo with a Shotgun is a guilty pleasure, and few films this year will likely be guiltier than this one. Its biggest crime, however, is lack of ambition. Hobo with a Shotgun is a trashy movie that didn't have the guts to be a real film.

Hello, fellow LAMB. Just wanted to let you know that The LAMMYs are coming up and we are hoping for the best voter turnout for the nominations ever. Every LAMB #1-900 is eligible to vote (and to win!), and that includes you. To participate, please go to this site: http://www.misterpoll.com/polls/521956

Hello, fellow LAMB. Just wanted to let you know that The LAMMYs are coming up and we are hoping for the best voter turnout for the nominations ever. Every LAMB #1-900 is eligible to vote (and to win!), and that includes you. To participate, please go to this site: http://www.misterpoll.com/polls/521956