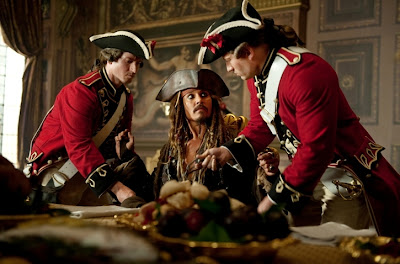 It's time to do that pesky midnight math yet again.  Before the first matinees even start on the west coast, Pirates of the Caribbean: On Stranger Tides has pulled in $4.7 million in midnight screenings.  So, using the math that we've been playing around with for the last few weeks, let's see where we stand.  As I've written previously, midnight grosses generally make up around 4.5%-6.5% of the total weekend take.  So the best case scenario is a weekend take of $105 million.  But the question becomes just how anticipated and/or front loaded is this fourth installment of the series?  It stands to reason that the film is more front loaded than Fast Five (which pulled in about 4.5% of its take from midnights) being that its a sequel, but certainly less front loaded than The Dark Knight  (which pulled in 11% of its $158 million debut at 12:01am Thursday).  However, this number is less than the $7.5 million that Iron Man 2 pulled down in its midnight debut, totaling about 5.8% of its $128 million opening.  So let's say that Pirates of the Caribbean: On Stranger Tides is about as front loaded as Thor (it's a sequel, but it's a less geek-skewing property than the Marvel Comics adventure), which puts the number at about 5%.  So, if the fourth film has already scored 5.5% of its weekend figure (word of mouth will likely be far worse than Thor or Fast Five), then the pirate adventure will pull down $85 million for the weekend.  So, the variable is between $72 and $104 million, with $85 million looking like the probable figure.  Okay, now I'm off to actually see the film in glorious 2D and review it.  Never thought I'd be able to accurately predict weekend box office before the opening day actually began...

Hi Scott, I'm a frequent reader of your blog, and while we don't always agree, I appreciate and enjoy your opinions and insights. You've certainly helped me understand the business better!