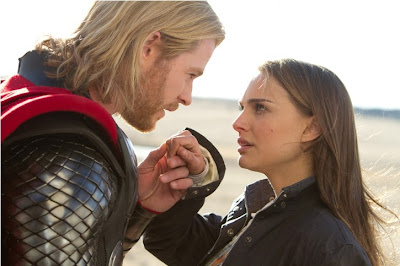 With pretty much every major summer tentpole doing the whole 'midnight screening' thing this season, it's going to be that much easier to predict the weekend even earlier. So with that, we can report that Marvel's Thor (review) has opened with $3.25 million in midnight sneaks last night. As I've written before, a film that goes wide at 12:01am generally makes between 5% and 6% of its opening-weekend take in midnight screenings. There are exceptions (Avatar and Fast Five pulled in around 4.5% of their Fri-Sun grosses in 12:01am screenings), but 5-7% seems to be a healthy average. So with that in mind, assuming that Thor is inexplicably front-loaded (unlikely as its not a sequel) and/or suffers from poor word of mouth (also unlikely, as the film is pretty fun and satisfying), let's assume that Thor does about 5% of its opening weekend grosses at midnight. That would give Thor a $65 million opening weekend take. Playing the averages, Thor could gross anywhere from $43 million (7.5% in midnight sneaks, or a likely worst-case scenario) to $72 million (a best-case scenario 4.5% in midnight sneaks). We'll know more when the Friday numbers come in, but for now, it looks like Paramount has pulled off another massive opening for a challenging franchise. For those who want a detailed look at the math regarding midnight screenings, go here.