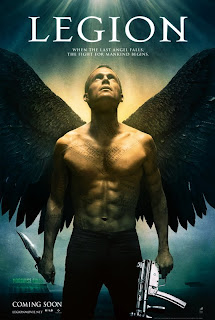 There's not very much wrong with Legion, except that it chooses to tell the wrong story and barely has the resources to tell the narrative that it chooses.  The idea of God finally becoming fed up with humanity and launching an extermination is an intriguing one, the kind of thing that brings to mind epic-scale apocalyptic carnage.  Yet the world of Legion primarily exists in a single roadside diner and it tells the tale of but a handful of victims of God's initial wrath.  This is certainly not the first film to tell of world-changing events from the point of view of a single group of isolated characters (Signs, Pontypool, Cloverfield, etc), but this is the first one of this sub-genre which seems to base its storytelling decisions on budgetary limitations.

A token amount of plot: God has decided to wipe out humanity, having grown tired of watching mankind squander their resources and their lives.  The only hope for our world is a lone rogue angel (Paul Bettany), who still loves us and still has faith in the species that was created in God's image.  He immediately ventures to a rundown greasy spoon, which contains a handful of locals, a few accidental tourists, and a young pregnant waitress (Adrianne Palicki) whose child inexplicably holds the key to humanity's survival.  As the world is attacked by the very forces of God himself, a battle for the very survival of our species takes place in the most unlikely of places.

The film peaks in its moody and character-driven first act.  While the occupants of the doomed restaurant are barely fleshed out, the casting is so spot on that the actors fill in the blanks for us.  Dennis Quaid is grizzled and beaten down by life, Charles S. Dutton is noble and optimistic, and Lucas Black is a simple young man clutching onto his friendship with Palicki as the sole reason to wake up in the morning.  The rest of our main characters are given only a few token details, but the film lets them authentically live and breathe for the entire first third of the picture, so we at least have some emotional investment when the violence starts.  Plus, owing to its mere $26 million budget, there is actually a greater focus on character interaction and narrative than slam-bang supernatural action.

Having said that, the relatively low-budget is a genuine problem for this ambitious picture.  You can see the filmmakers struggling to achieve the bare-minimum visual quality for a theatrical supernatural horror picture, and the action beats are always shot in tight-closeups and edited in a way to best hide the lack of scale.  There's certainly no fault in not wanting to spend $80 million on this honest-to-goodness B-movie, but I've seen cheaper genre pictures that looked better when it counted.  Besides, the lack of funds detracts from the urgency of the picture.  We are told once or twice that the entire world is being overrun by God's minions, but we never once see it or even hear the carnage that surely must be taking place elsewhere.  Even as we are invested in the fates of our leads, we can't help but wonder about the story happening just off-frame.

Still, in the end, Legion is a cheap B-horror thriller with the requisite religious overtones.  Whatever it lacks in production values, it makes up for with solid acting by a better than expected cast.  The picture doesn't quite know when to end, climaxing a good fifteen-minutes after its natural finale, but the first two-thirds of the movie is pretty solid entertainment.  Come what may, Legion may be a victim of its own successes.  It desperately wants to be a real movie, and it's just good enough as an acting treat to make me genuinely mourn its lack of visual oomph.