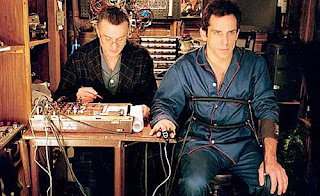 Deciding that what worked so well last time will work again this time, Universal has moved Little Fockers from its July 30th release date smack dab into Christmas weekend, or December 22nd.  I'm assuming this might have something to do with better than expected in-house buzz for Edgar Wright's Scott Pilgrim Vs. the World, which will now open on August 13th.  It might also have something to do with the fact that Meet the Fockers parlayed a Christmas weekend release in 2004 into a mammoth $279 million domestic gross, which makes it the second highest-grossing comedy of all-time behind Home Alone ($285 million).

Perhaps after the uber-strong January/February 2009 slate, which crippled the Christmas 2008 releases (Bedtime Stories, Marley and Me, Valkyrie), scared off Universal and sent them towards a summer release for what arguably is their biggest franchise.  But after the sustained legs of not only Avatar, but Alvin and the Chipmunks, Sherlock Holmes, and It's Complicated, Universal must have realized/hoped that the blockbuster January 09 business (Paul Blart: Mall Cop, My Blood Valentine, Taken, Gran Torino, etc) was somewhat of a fluke.  On the other hand, the surefire hit will now surely dampen the reception of the Coen Brothers' True Grit  remake (which opens on Saturday the 25th) as well as Michale Gondry's The Green Hornet.  We'll see...

I hope this is a return to form for this franchise. I found 'Meet the Fockers' absolutely terrible. Just remember, the characters themselves don't have to be outlandish to create outlandish situations.

Wait, the Coens are remaking "True Grit?" How did this fly under my radar?

Curse you, internet police! If only there were some way I could convince IT that IMDB.COM is essential to my job without alerting them to blogspot slipping through the system...

I didn't mind Meet the Fockers. Neither films were high art. Frankly, I appreciated that the addition of Barbara Streisand gave Blythe Danner something to do in the second picture, although Terri Polo was wasted once again.

I wholeheartedly agree Fockers was garbage. Almost a carbon copy of the first film just more outlandish. Also, Deniro's character can be filed under the same class as Chris Tucker in Rush Hour 2 and Sean William Scott in American Wedding as an over the top version of the character (especially in opening moments) just to remind dumb people how they were (if that statement makes any sense).

I'm not looking forward to this 3rd entry as the former made a ton of money and the studio will want more of the same.

Sadly, the first was one of the better comedy's of the decade, imo.

Nah man, they moved "Fockers" to December because Universal plans on shooting the film in 3-D IMAX using blue CG actors -- gonna chum up some Avatar-like numbers with that formula.

Oh, who am I kidding, Universal can't afford that!