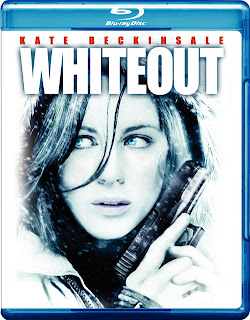 Despite a marketing campaign that sold it like a horror film, with the implication of supernatural terror at work, Demonic Sena's Whiteout is refreshingly earthbound. Based on a graphic novel by Greg Rucka, the film is an old fashioned closed-door mystery with the added bonus of its locale. Set in the coldest spot on Earth, this Antarctica film noir lends both breathtaking location shots and an added element of tension. It's plot, concerning damaged former US Marshal (Kate Beckinsale) who investigates the first murder ever to occur in the frozen arctic, is strictly by the book. While the film keeps its answers close to the vest until the very end, you'll solve a big chunk of the mystery (who-dunnit) pretty quickly. Helping spice up the proceedings is Antarctica itself, which stands in as a secondary killer that is actually far more dangerous than any villain.

The film is more than a little slow, and it doesn't add up to much in the end. As a mystery, it's outclassed by any given television procedural on any given network. But it is refreshing in a few spots. Tom Skerritt makes his first mainstream theatrical appearance since Tears of the Sun in 2003, and his presence is a welcome one (fear not, he's been busy in television and indie films). The violence is restrained, gruesome and brutal on occasion but not over the top. There is no gratuitous supernatural revelation, there is no forced romance between the main leads, and there are no attempts to dumb down the material or jazz up the set-pieces in order to hook in younger audiences. This is an adult thriller with adult sensibilities through and through. It's not a great movie, and as a mystery it but Whiteout is just the sort of film works best for home viewing. It's a pleasantly entertaining little B-movie that will likely thrive on cable in a way that it did not in theaters. For better or worse, it's a 'laundry-folding movie'.

The Blu Ray: Video - B, Audio - B Extras - C+
The film looks and sounds just fine. Since a huge chunk of the film is filled with blinding white snow, it's certainly not a demo disc. But the interiors are bright, with bold colors and sharp detail. The extras are sparse, but of a relatively decent quality. There are two amusing, character-expanding deleted scenes that run a total of four minutes, which should have stayed in as the picture isn't that long to begin with. There are also two twelve-minute featurettes. The first doc deals with the actual making of the picture, with an emphasis on shooting in unbearably cold locales (Canada subbed for Antarctica). The second, more interesting piece, is a discussion about the origins of the original graphic novel, the choices that were made in the adaptation, and comic writer Greg Rucka's thoughts on seeing his creation come to life. There's nothing groundbreaking here, but it's all worth watching once if you liked the movie (or liked the comic). Of course, there is also a digital copy for those so inclined.