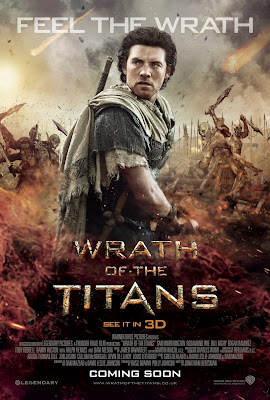 Jonathan Liebesman's Wrath of the Titans is arguably about as 'good' as a movie called Wrath of the Titans can be expected to be.  It is convincingly acted by its principals, has a story that mostly makes sense, and has at least a few scenes of genuine visual enchantment.  I could complain that I wish it had more of what it does right (epic battles of humans versus gods, some wonderful set designs, Liam Neeson and Ralph Fiennes having a full-blown 'camp-out') and less of what it does wrong (an almost beside-the-point narrative, a relatively blank-slate supporting cast, generally useless attempts at character development), and clever readers will notice that I just did in an offhand fashion.  But the picture delivers the goods in ways that the Louis Leterrier original did not two years ago.  It is also clear that Warner Bros learned its lesson regarding cheap 3D-conversions.  While Clash of the Titans became the poster child for the evils of 3D-cash ins, Wrath of the Titans features some of the most impressive live-action 3D seen to date.  If you're actually going to spend money on something called Wrath of the Titans, it is honestly worth seeing in its 3D glory.  Of course, there is irony in me recommending something that works best as a cheap Saturday matinee in a format that makes it noticeably less cheap, but that's your conundrum.

I could go into the plot, but I imagine most of you don't care.  So all you need to know is that ten years have passed since Clash of the Titans, and Perseus (an absolutely committed Sam Worthington) is a single-father to a young son (poor Gemma Arterton was brought back to life in the epilogue of Clash of the Titans only to die offscreen here).  Anyway, various power-brokering between the various gods have once again threatened humanity, so Perseus reluctantly suits up to save the day.  That's pretty much the ballgame, although the picture takes a bit too long to get to that point.  As in the first film, the villains stupidly target Perseus directly, turning a reluctant warrior into a committed opponent.  But the plot is of course merely a clothesline to hang some large-scale action sequences and some genuinely eye-popping set designs.  As noted above, the film is indeed a visual marvel, and I'm especially partial to a gigantic labyrinth that leads to Tartarus.  It is indeed a splendid labyrinth, filled with traps and an ever-changing system of walkways, doors, and steps.  As for the action sequences, the focus is generally on Perseus's attempts at survival, so some of the cutting is a bit too close and tight for my tastes.  However, the larger the opponent, the wider Liebesman shoots and the longer her holds each shot.  Unlike the first film, which felt genuinely claustrophobic, this one feels more like a large-scale action fable, with the scope and scale to justify its obvious expense (I don't know the budget).

But almost as impressive as the visual oomph is the goofball acting provided by Ralph Fiennes, Liam Neeson, and one other elder statesman who I won't name since he wasn't mentioned in the advertising.  Neeson and Fiennes have an especially grand time, as they do more with more screen-time, culminating in a third act moment that is so absolutely absurd (yet strangely appropriate) that I almost wanted to applaud its sheer audacity.  Furthermore this film has a lighter touch than the last go-around, including a few moments that all-but mock the self-seriousness of the prior picture.  But the film's core flaw is that there just isn't enough of what is good in its brief 90 minutes+credits run time.  The film has a relatively incident-lite second act, and most of the gonzo fun is held for the climax.  I suppose we're supposed to care about Worthington's budding romance with warrior queen Andromeda (played by Alexa Davalos in the first film, but Rosamund Pike this time around), but I was turned off by another instance of 'revolving door of disposable female leads'.  And I suppose we should care about the various family turmoil among the Gods, but all of the Gods are such bastards (although Zues is more of a clear-cut good guy this time around) that I really don't have much sympathy.  Perhaps due to budgetary constraints or perhaps director Liebesman (who tries the same 'plausible authenticity in a fantastical scenario' trick that he attempted with Battle: Los Angeles and Texas Chainsaw Massacre: The Beginning) and writers Dan Mazeau, David Johnson, and Greg Berlanti were trying to make a real movie, but the film feels occasionally restrained when it should be over-the-top.  Trying to make a 'real movie' is great when you deliver, but when you fail, you just make audiences angry because you wasted time that could have been spent with 1,000-foot tall wind monsters and the like.

Still, if one is going to buy a Saturday afternoon (or better yet, Saturday morning before noon) ticket to Wrath of the Titans, one will indeed get their money's worth, even in its pricier 3D format.  Like a lot of near-misses, it's just good enough to make me wish it was truly great.  But the actors are having fun, the film is gorgeous to look at, and the picture delivers enough big-scale action and moments of eye candy to justify your time and expense.  Wrath of the Titans isn't quite 'good', but it delivers most of what it promises and generally justifies its existence as silly big-scale B-movie fun.

Exactly what I wanted to read. The remake is terrible but it gets constant rotation in the Blu Ray player simply for the Kraken sequence (stunningly photo real visual effects) and any scene with Neeson and Fiennes. This sounds like more of what I wanted.

Scott, how good is the Kronos sequence? From the trailers, it looks absolutely ridiculously epic.

Its Zeus not Zues