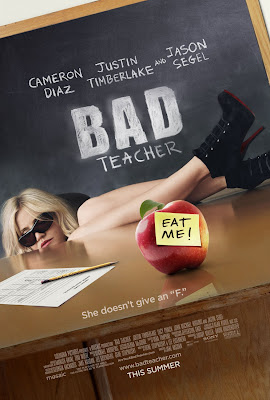 I didn't laugh all that much at Bad Teacher.  I wasn't offended by Bad Teacher, nor did I find Diaz's scheming protagonist particularly unlikable.  But the film suffers from the same malady as last summer's The Other Guys.  Like that film, Bad Teacher is filled with solid comedic character actors doing occasionally amusing broad turns. But like the Will Ferrell/Mark Wahlberg caper, the Jake Kasdan-directed picture feels like a handful of strung-together sketch moments, often disconnected from each other and failing to exist as a whole narrative.  Of course, comedies that exist purely to patch together one comedic sketch after another can work if those sketches stand on their own two feet.  But this is not the case, and Bad Teacher fails as a comedy and as a story.

I'd offer a token amount of plot here, but there really isn't much of a plot to be found.  Cameron Diaz plays a disgruntled teacher who is forced back into the classroom after her wealthy fiancee dumps her.  Yes, there is a token thread of sorts, as said 'bad teacher' attempts to raise money in order to get new breasts, and/or romance the new substitute teacher (Justin Timberlake) who is an heir to as wrist-watch company.  But the film makes a minimum at-best effort to actually turn these thin strands into a story worth caring about.  Morever, while there are any number of terrific character actors lurking in the corners (Lucy Punch, Phyllis Smith, John Micahel Higgins, etc), there remains an aura of artifice over the entire film.  Point being, a stunning number of scenes basically involve characters talking to each other in code, with one or both parties either intentionally misleading the other or speaking 'in character'.  As a result, there is a disconnect to much of the picture, and it often plays like a feature length two (or more) person version of Kevin Nealon's 'subliminal technique' character from his Saturday Night Live Weekend Update days, but without the 'under my breath' punchline.

The best scenes in the film are the ones with Diaz and Jason Segel (as a put-upon, but knowing gym teacher), as their moments are among the few where both characters are somewhat honest with each other.  A truly surprising thing about the picture is how little time is spent showing Diaz interact with her students.  Diaz's character is not a proactively and aggressively bad educator, but merely a lazy and/or absentee one, which is far duller and arguably less rewarding.  There is a spark of life to a second-act sequence where she attempts to get her kids into educational shape using a dodge-ball as a punitive device, but the idea of a once-lazy teacher motivating her students using equally poor teaching methods is dropped without a thought.  I have no idea how much deleted footage exists out there, but the entire choppy picture is filled with subplots and comic ideas that seem to be bare remnants of a much fuller and fleshed-out motion picture.

The film is not a total loss.  There are several somewhat amusing moments, and Cameron Diaz commits with an almost courageous gusto to a role that gives her little room for sympathy.  Heck, even Billy Bob Thornton had a troubled child to care for and mentor in Bad Santa, but Diaz is merely out for her own superficial ends for pretty much the entire picture.  And while social commentators may hold up Diaz's character as a poor gender role model in a way that Thornton or any number of male actors have avoided, the film itself barely acknowledges her gender in any particular fashion.  Even the much-advertised sexually-tinged car wash scene is blink-and-you miss it.

Perhaps the biggest triumph of Bad Teacher is the fact that such a film can exist without it primarily being about gender and/or gender roles in society.  But social progress via apathy cannot excuse a comedy that has few real laughs and a story that has no momentum and little connective tissue.  Bad Teacher is not offensive, but it not insightful or compelling.  There is no law saying that a comedy has to be anything other than funny.  But Bad Teacher does not reach even that standard of quality.  And despite the educational system that lies at its core, the film has nothing to teach and nothing interesting to say.