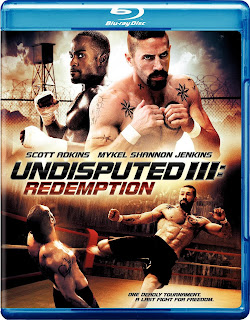 Eight brutal prisoners from around the world converge in a Georgian prison to engage in brutal fights to the (almost) death with the promise of freedom for the victor. Wealthy men and corrupt authority figures will wager on the outcome, but one man has decided to fight back. Sound original? Of course not, but I would argue (by default) that Undisputed III is The Godfather of the 'prisoners fight to the death' sub-genre. It's competently acted (its always good to see Robert Costanzo), looks gorgeous thanks to the Red One camera, simply plotted, and contains just enough impressively choreographed fight scenes.

The real reason to see this straight-to-DVD/Blu Ray title is of course the brawling, and it does not disappoint. Compared to the sort of brawling we see in Death Warrior and other MMA garbage, fight choreographer Larnell Stovall comes off looking like Yuen Woo-ping. The fight scenes are varied, painful, and genuinely engaging to watch. Most importantly, director Isaac Florentine (who cut his teeth directing Mighty Morphin' Power Rangers episodes in the 1990s) shoots said action beats in wide shots and long takes, often at a 3/4 birds-eye angle, which allows us to see both combatants at the same time. The film is what it is, but it's a surprisingly watchable entry in a sub-genre that I generally have little to no interest in. It's a surprisingly high-quality direct-to-DVD/Blu Ray action picture.

As noted above, the picture quality is rather gorgeous. While much of the film is set in dark, grungy prison sets, the level of detail would be highly impressive for a big-studio release, let alone a low-budget DVD title. The colors pop whenever the fighters actually step into the ring. I hesitate to say it, but the Red One camera in some ways may be superior to traditional film stock, especially when dealing with detail and robust colors (the Gamer Blu Ray looked jaw-droopingly vivid). Once the technology becomes just a bit cheaper, we may finally see the end of cruddy-looking direct-to-DVD titles once and for all. The sound (English 5.1 DTS HD Master Audio) is not all-that special, mainly because the occasionally loud rap music occasionally drowns out the sound effects and dialogue. But, to be honest, I had English subtitles on anyway (have to keep the volume lower so as to not wake the sleeping baby), so my experience may differ from yours.

There are no extras on this disc, not even a scene selection. The main menu offers 'play movie' and 'set-up', and that's it. The title comes packaged as a Blu Ray/DVD combo set, for whatever that's worth. Oddly enough, the film is priced quite a bit higher than the norm, with the DVD retailing for $28 and the Blu Ray selling for $36. Still, as a rental, the film delivers on all counts for those who enjoy a little B-movie trash served up with a genuine attempt at quality. The visuals are gorgeous and the fight scenes absolutely deliver. Undisputed III: Redemption is a slight breath of fresh air for both the direct-to-DVD market and the mixed-martial arts action genre. In a category where 'pretty bad' is par for the course, Undisputed III is 'not bad'.

Grade: B
Posted by Scott Mendelson at 8:39 AM