Review: The Call (2013) is much better than you were expecting, at least for the first hour. 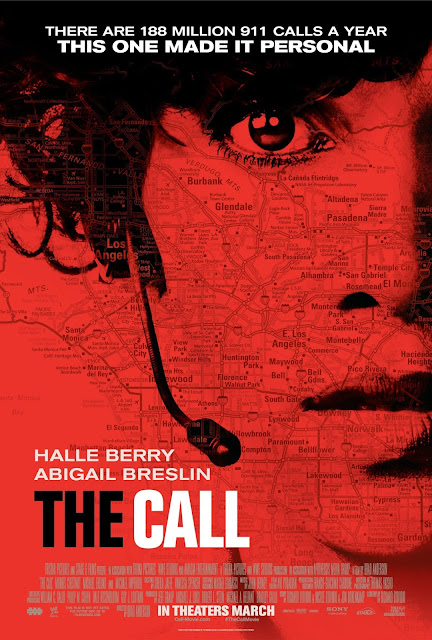 For the first hour or so of The Call, you'll think you're watching a new B-movie classic.  The picture is staged as a typical 'special location' thriller.  We get a solid prologue, a decent chunk of the movie set during the actual situation we paid to see, and then, as must always be a the case, a finale set away from the prime location.  Speed had to eventually leave the bus, Shoot to Kill had to eventually get out of the mountains, and Red Eye couldn't just end on that plane.  It's how a film like this handles the eventual disembarking that determines its overall success.  Sadly, The Call blows the dismount by a considerable margin, trading plausible real-world tension for generic genre cliches.  But up until that time, it is a superior thriller, and a successful return to the somewhat lost art of what Roger Ebert liked to call the bruised-forearm movie.  For the first 2/3, The Call is a nearly perfect example of what it's trying to be.

The picture's premise is pretty simple: Jordan Turner (Halle Berry) is a 9/11 operator traumatized by a botched response call six months prior, where a tactical error caused a bad situation to end very badly.  Now she merely teaches newbies how to do the job she used to love.  But theoretical redemption arrives when young Casey Wilson (Abigail Benson) is kidnapped and tossed into a trunk yet manages to keep her cell phone.  She calls for help and the chase is on, as Casey frantically tries to do whatever she can to help police discover her location and Jordan does everything she can to avoid repeating history. The screenplay by Richard D'Ovidio, Nicole D'Ovidio, Jon Bokenkamp is surprisingly intelligent and achieves maximum effect by keeping it relatively real for those first two acts.

There is a certain plausibility to the proceedings which only heightens the tension and suspense.  The extended chase sequence mostly makes sense, as Casey arguably makes the best decisions possible under the circumstance and Jordan offers solid advice while the police department frantically follows up what clues they happen to have. Certain uncontrollable variables alter the situation in token ways as some bystanders are incredibly helpful while others arguably make things worse. Everything feels real as its happening.  This is the kind of movie where the characters actually do that smart thing you were yelling at the screen for them to do.  There is a genuine satisfaction in seeing characters in a movie like this reacting in much the way you'd hope you'd react.

Berry is surrounded by a number of solid character actors and the likes of Morris Chestnut, Michael Eklund, Michael Foster, David Otunga Michael Imperioli, José Zúñiga, and Roma Maffia offer strong support.  If I may, it's frankly refreshing to see a mainstream big studio picture that isn't specifically a 'black film' with so many actors of various colors in key roles. Berry is fine, less impressive in the trailer-friendly moments where she's supposed to be defiant or tough, but completely plausible as a real-world 9-11 operator. Breslin's character doesn't have that much to do other than maintain her sanity and survive, but she crafts a rooting sympathy for her distressed damsel. Those around her are merely level-headed professionals with a job to do, and I appreciated that the film never oversells their relative heroism for the sake of melodrama.  Having never been inside such a call center, I can only hope it's as professional looking, as professionally run, and as technologically advanced as it looks here, budget cuts be damned.

So for those first two acts, The Call is frankly superb, but the film falls pretty hard in its final stretch.  The picture could have found a way to realistically end its narrative, giving us a situation where Berry played a key part in bringing about a satisfactory conclusion without plunging her character and thuis the film directly into contrivance and cliche.  They chose otherwise.  The final thirty minutes evoke eye-rolling cliche, with smart characters acting stupidly or failing to discover the seemingly obvious. The previously realistic murderer is given a contrived back story and MO out of Criminal Minds.  The film revels in the kind of female-in-peril and sexualized fetishistic violence that it had previously avoided, bringing to mind the likes of Captivity. Sadly the film ends in a way that defies logic and devalues the nail-biting suspense that proceeded it.

Still, the lousy last 25 minutes or so cannot completely undo the goodwill built up by the first hour. For most of its running time, The Call is a frankly terrific little potboiler, effectively building suspense and emotional investment via a strong cast of actors and a commitment to chilling plausibility.  That the film drops the ball in the final lap should not completely disqualify what came before.  The first hour of The Call is among the best B-movie thrillers I've seen in awhile.  The last thirty minutes basically turn into the kind of movie you expected it to be.  For that first hour, it is a testament to the value of solid character actors, a genuinely plausible scenario, and, however limited in scope, honest-to-god production values (This is no found-footage cheapie!).  The Call may not stick the landing, but it's a glorious piece of entertainment while it's in the air.

Grade: B
Posted by Scott Mendelson at 9:07 AM

Have you even watched this movie? I have never heard someone speak so much bullshit just to bag out a movie.