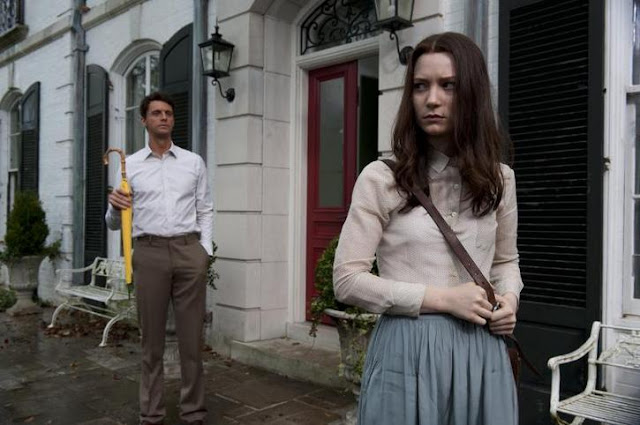 The best film of the weekend also had the best per-screen average of the weekend.  Fox Searchlight's Stoker earned $22,689 on each of its seven screens for a $158,000 opening weekend.  Now any number of films can open strong in limited only to tank as it goes wider, so now it's just a question of whether Fox Searchlight even bothers to expand it and how larger audiences react to what is clearly not a mainstream thriller. But for those in the mood for what it offers, it's delicious.  The other three newbies were, um, The Last Exorcism part II, 21 and Over, and Phantoms.  Let's make this quick.  The Last Exorcism part II was a case of CBS Films picking up a franchise that Lionsgate smartly knew was a one-and-done affair.  The original, which opened to $20 million in late 2010, was actually quite good, arguably among the best found footage horror films of the modern era.  But it wasn't something that demanded a sequel and its $8 million opening weekend should be a giant warning sign to the financial backers of Insidious 2 and Sinister 2, although if both films can keep their budgets similar to the $1-3 million that their respective predecessors cost, then they'll be profitable regardless. Even this new one cost just $5 million, so it will still make money.


21 and Over will also probably make money in the end as well as a result of its mere $19 million budget.  Still, a $9 million debut isn't what Relativity was looking for.  Nonetheless, a star-less teen party comedy that was sold as a generic teen party comedy couldn't have hoped for much more. The last new release was Phantom, a 'where did this come from?' supernatural submarine thriller starring Ed Harris, David Duchovny, William Fichtner, and Lance Henriksen.  Such a cast will mean this may be a solid rental in 120 days time, but as a theatrical debut for RCR Media Group (better known for releasing direct-to-DVD sequels of tired franchises like Hostel, SWAT, Wild Things, or Stomp the Yard), it was DOA.  The film earned $478,000 on 1,118 screens, giving it the eleventh-worst per-screen average ($424 per) of all-time.  It got just enough halfway decent reviews to suggest that it might not be awful (I got a press invite but had other obligations), so it may be a curiosity rental when the time comes.

In holdover news, Identity Thief crossed $100 million, earning another $9 million in the process.  At $107 million, it will soon surpass Dumb & Dumber ($127 million) to become the second-biggest road trip comedy behind Wild Hogs ($167 million) *and* it is already the second biggest con-artist picture behind the $164 million-grossing Catch Me If You Can.  Snitch held up strong, earning another $7 million and bringing the total for Summit's $5 million acquisition to a solid $24 million for The Rock.  It may not be much, but these are the kinds of figures that Arnold, Jason, and Sly can only dream of right now. Les Miserables crossed $400 million worldwide while Mama crossed $100 million global.  Safe Haven is at a strong $57 million and A Good Day to Die Hard sits with a comparatively pathetic $59 million (the *only* reason Fox isn't taking a wash is because they only spent $92 million).  And Weinstein's Silver Linings Playbook has $115 million while its animated Escape From Planet Earth has $43 million on account of Jack the Giant Slayer getting that PG-13.  Life Of Pi has $116 million and nearly $600 million worldwide.  Django Unchained has $160 million domestic and nearly $400 million worldwide.  Also of note, Warm Bodies now has $62 million, Lincoln just crossed $180 million, and Zero Dark Thirty has sadly stalled at below $100 million.  Thanks a lot Feinstein, Levin, and McCain.

That's it for this weekend.  Join us next time for Oz: The Great and Powerful and Dead Man Down.  Until then, keep reading.

I saw "Phantom", and liked it, as did the other 8 people in the theater last night. At $12 a ticket, I guess we were an under-performing location.

and the hobbit crossed the 1 billion mark; which is good.