Weekend Box Office: Oz: The Great and Powerful summons $80 million, with all signs pointing towards a leggy run. 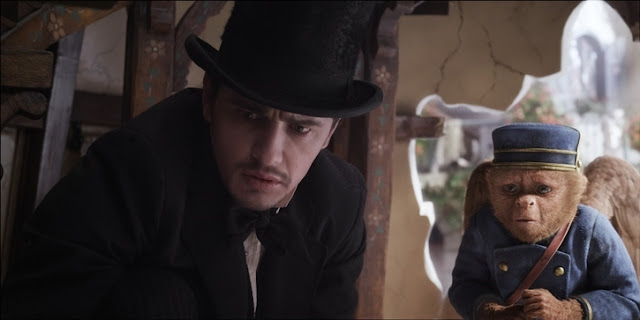 I've said this before, but one of the problems with modern box office analysis is that it treats studio tracking numbers, which are supposed to be internal figures that can be used to adjust marketing in the run up to release, as ironclad box office predictions.  More often than not, pundits use tracking in a way that creates a preemptive doom-and-gloom scenario where a new release is painted as a box office turkey before it even opens *or* its used to give unrealistic expectations to a new release so that studios are then forced to defend what is actually a solid debut.  Such is the case with Oz: The Great and Powerful (trailer/posters).  The $215 million Disney prequel debuted with a strong $80.3 million this weekend.  Alas, due to rumblings and arbitrary presumptions that the film would open with as much as $100 million over the weekend, mostly due to the project's token similarities with Alice In Wonderland, Disney may now be forced to defend what is easily the biggest opening of 2013 by more than double and the third-biggest March debut ever behind Alice In Wonderland ($116 million) and The Hunger Games ($153 million).

So before we get into actual analysis, let's be very clear.  Oz: The Great and Powerful just opened with $80 million.  There was a time when $80 million would be an eye-popping unqualified success that absolutely no one could question.  I would personally argue that with the very fewest exceptions it still is.  Unless we're talking about something like Avatar 2 or Toy Story 4, this is a fantastic number. There really is no big secret behind the successful debut.  Disney spent a lot of money to market the picture as the first big blockbuster of the year and pretty much everyone knows the original Wizard of Oz in one or more of its various incarnations.  As I mentioned just over a week ago, the film benefited from having actual movie stars who could do mainstream press outlets and appear on magazine covers, as well as actually being appropriate for kids unlike a certain $200 million fantasy that dropped by about 65% this weekend.

The post-Thanksgiving movie going season has been absolutely barren for kids and families, with only a "who cares?" 3D reissue of Monsters Inc. and a second-rate Weinstein Company cartoon Escape From Planet Earth providing anything remotely kid-friendly. Families who like the movies desperately wanted something... anything they could see and responded to this all-inclusive package accordingly.  Had there been more obvious family fare in the recent months, had Jack the Giant Slayer been PG, had there been less of a drought of family-friendly titles in the marketplace, well, okay, it wouldn't have made *that* much of a difference this weekend, but the barren marketplace certainly helped. Presuming it performs exactly like Alice In Wonderland, it will have a 2.88 weekend-to-final multiplier and end its domestic run with $230 million plus countless 3D-infused millions overseas. For the record, it earned another $69 million overseas for a worldwide debut of $150 million.

Frankly, while Oz: The Great and Powerful has its writing issues, it's a far more satisfying movie than Alice In Wonderland and I can confirm that it went over like gangbusters with the packed general audience crowd I saw it with Friday night (in 2D with my daughter in tow, natch).  So a similar multiplier is arguably guaranteed although I hesitate to presume that it will have stronger legs. But yeah, especially if The Croods proves to be less leggy than How to Train Your Dragon, Oz: The Great and Powerful could flirt with $250-$300 million.  The film pulled just 2.5% of its weekend gross at 9pm-to-midnight (compared to Alice In Wonderland's 3% midnight haul) and pulled a terrific 3.3x weekend multiplier off a $24 million opening day (Alice had a 2.8x weekend multiplier off a $41 million first Friday).  And while the movie has issues (I am one of probably a million bloggers/pundits who will dissect the film's gender messaging), it works as impressive large-scale entertainment and it delivers the goods for general moviegoers.

So yeah, so far all the signs indicate that Oz: The Great and Powerful is in it for the long haul.  The rest of the box office will have to wait, perhaps until next weekend.  Dead Man Down flopped as expected, with $5.3 million for the weekend (who here thought it would do remotely well this weekend?). Jack the Giant Slayer got crushed by Oz: The Great and Powerful, and that's pretty much it for this weekend. If apologies are required, they are extended accordingly...

I believe the overseas debut was a bit softer than expected considering the number of markets it opened in. Probably look around $500-600 million worldwide.

It wasn't as good as Alice in Tim Burton's Head.


The effects seemed pretty much in the same universe but I don't think any better - Kunis' makeup looked terrible and I cringed every time Oz picked up the China Doll.


With the gender problems you wrote about I surprised you though it was better. At least Alice broke the glass ceiling and had a cool idea and I liked the imagine 3 impossible things bit.