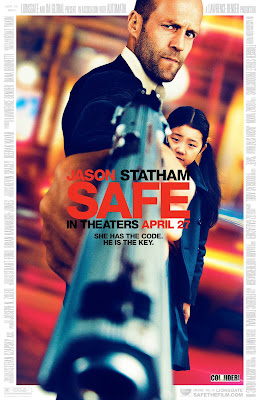 Writer/director Boaz Yakin's Safe is the kind of B-movie action film that does the designation proud.  It is openly thoughtful and intelligent, crafting a truly engrossing bit of character drama while holding the action in reserve until it matters.  It delicately balances a real-world narrative with action sequences that are just a touch over-the-top without ever sacrificing drama for thrills or vice-versa.  It's unapologetically what it is, but Yakin and star Jason Statham have crafted a rock-solid action drama that is rooted in 1940s film-noir transfused with an authentic post-9/11 paranoia New York City milieu.  It's high time I stopped referring to movies like this (adult-skewing R-rated star-driven genre pictures) as 'the kind of films they just don't make anymore', since such films have clearly made a comeback in the last couple years.  And Safe is a sterling example of why they have a genuine value in the cinematic landscape.

There is actually quite a bit of plot, so I'll try to go easy on the synopsis details.  Long-story short, down-on-his-luck Luke Wright (Jason Statham) is a man alone in the world, for reasons made tragically clear in the opening reel.  Intentionally cutting himself off from any real human connections, the former cage-fighter is pulled back into the land of the living when he witnesses a young Asian girl being pursued by several opposing forces, none of which seem to have her best interests at heart.  A moment of decisive action puts young Mei (Catherine Chan, delivering a strong, low-key turn) into Wright's custody and both of them in immediate danger.  As Luke realizes who this girl is and why she is so valuable, he finds himself in the unique position of power broker among a Chinese crime family, the Russian mafia, and corrupt NYC cops who are also trying to play both sides.  None of this is overtly original, but this well-worn story is told with high-style, genuine tension, and a gray amorality that keeps it from becoming a routine 'redemption' journey.

As mentioned above, this is a dark and grimy picture, filled with strong character actors (Chris Sarandon, national treasure James Hong still kicking ass at 83 years old) and authentic New York City locations.  The action and violence is held in check for the first half of the film, as our two leads are fully developed even as they start their journey on opposite shores.  The lone burst of sustained violence in the first act is somewhat of a marvel, a terrifying abduction sequence which is executed in a single child's-eye view take.  But when the film becomes a full-blown action picture, we are treated to a flat-out nuts shoot-out in a public place.  Much of the action is like this.  Instead of empty warehouses or abandoned flame factories, most of the set-pieces take place in full public view.  One could carp that the type of sensational violence that takes place would realistically bring about national scandal to the parties involved, but it's somewhat worth the trade-off for the heightened tension and suspense as civilians and bystanders are put in genuine jeopardy as this crime story unfolds.  While the hand-to-hand fighting is a bit too choppy for my tastes, it is edited with more-than-enough clarity for narrative coherence, and the film earns points for crafting some genuinely unique action set-pieces.

Statham arguably plays his stock character, but like The Bank Job, he does it in a film worthy of his buttoned-down rage.  He's as good here as he's ever been, even if it wouldn't qualify as 'stretching'.  The supporting characters are all genuine human beings; be they on the side of outright evil or only somewhat evil.  Reggie Lee especially shines as Mei's primary captor as he makes the most out of limited screen-time.  He is given a few moments of empathy as it is made clear that he genuinely cares about this young girl as much as his profession allows him to (alas, the picture fails to give him a true 'final scene').  The cast of cops, criminals, and criminal cops may skirt with cliche, but the lived-in performances bring token depth that gives the tale more emotional stakes than you'd expect.  The film has a genuine authenticity, from its locations to its crackling details of casual corruption, that would arguably make James Elroy proud, even as he rolled his eyes at some of the more outlandish action beats.

Safe is an unabashed genre picture, but it also happens to be a damn-good one.  It's tightly constructed and flawlessly acted, with a strong screenplay that balances character, plot, and action without ever letting one overshadow the others.  Whether or not it's better than The Bank Job is merely an arbitrary distinction, as the under-seen Roger Donaldson period-heist picture is such a different kind of picture.  But among the many films where a bad-ass Jason Statham wears a nice suit, beats the hell out of countless thugs and shoots quite a few more, Safe is easily at the top of that admittedly specific sub-genre.