Review: Olympus Has Fallen (2013) is violent and stupid, a 'direct-to-VHS Die Hard rip-off' on steroids. 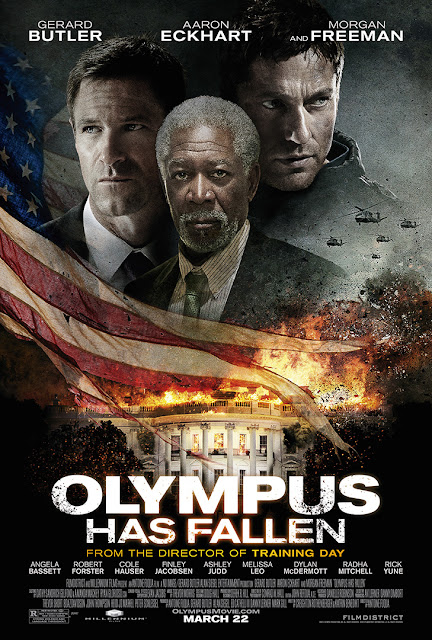 If taken at face-value, Antoine Fuqua's Olympus Has Fallen is pretty much morally indefensible. Written by Creighton Rothenberger and Katrin Benedikt, the film offers a level of jingoistic fear-mongering  the likes of which are more commonly associated with a 1980s Chuck Norris vehicle and/or the likes of Cobra.  It is astonishingly violent yet acts as if the safety of a single person is all that necessitates a happy ending.  While the slightly similar 'president in peril' epic Air Force One at least implicitly asked what cost in lives should be spent to preserve the life on a man who happens to hold a certain elected office, Olympus Has Fallen has no such weighty ideas on its mind.  It is not so much a Die Hard rip-off but a high-budget ($80 million) ode to the flurry of cheapie straight-to-VHS knock-offs that flourished in the late 1990s, complete with simplistic plotting and implausible levels of violence.  It isn't terribly smart and it peaks in the first act, but damned if I didn't enjoy the picture nonetheless.

A token amount of plot: The White House has been invaded and taken over by a group of heavily armed militants from North Korea.  Led by the diabolical Kang (Rick Lune), they have kidnapped the President (Aaron Eckhart), the Vice President, and several cabinet members, leaving the Speaker of the House (Morgan Freeman) in command.  Outside intervention seems hopeless, but as always, say it with me now... "There's one thing they didn't count on!".  That one thing is Secret Service agent Mike Banning (Gerald Butler), formally on the president's detail but now languishing in the Treasury following a tragedy.  Can he redeem his past failing by sneaking into the White House and picking off the terrorists one-by-one?  What is the terrorists real motivation and can they be stopped in time?  How is it that we've never had a Die Hard In the White House movie until now yet this year this is only the first of two such films?

This is all standard Die Hard material, but again feeling more like something like Chain of Command than Air Force One.  The film's opening reel is quite compelling, establishing the main characters and the conflicts that must be overcome (sorry for the vagueness, I'm assuming some of you haven't seen the spoilery trailer).  The opening siege is jaw-droppingly violent, with countless Secret Service agents, police officers, and innocent bystanders being slaughtered in a variety of colorful  and brutally gruesome ways.  The sequence goes on for what feels like a full reel and it really is a suburb action sequence even as we wonder just how 'fun' and 'escapist' this massacre is supposed to be.  We see plenty of aftermath as well, with pretty much every subsequent scene littered with dead bodies and at least one moment of horribly wounded survivors filling up the local hospital.  For what it's worth, it's somewhat of a testament to how far removed we've become from 9/11 that something like this can be in a popcorn entertainment.

The rest of the film follows the normal template, with hostages being menaced and occasionally executed, with Secret Service Agent Mike Banning dispatching one bad guy after another (in mostly uncreative but blood-drenched ways) while high-level politicians frantically try to figure out what to do from the situation room. Despite their high billing, Morgan Freeman and Angela Bassett have little to do and even Aaron Eckhart as President Asher has little to do other than show token resolve when the story demands in.  Considering the quality of the cast, it's somewhat shocking how thin the characterizations are for pretty much everyone (I'll just say Melissa Leo deserves better and leave it at that).  Ashley Judd cameos as the First Lady basically to pocket a quick paycheck to fund her upcoming Senate race against Mitch McConnell while Dylan McDermott seems to have been directed to go for Billy Zane-in-Titanic levels of bad acting as a former Secret Service agent now in the private sector. Radha Mitchell plays Butler's girlfriend, a thankless role in a pointless time-wasting 'subplot'.  Rick Yune does what he can as the heavy and he is given a token amount of real-world motivation. Butler is okay, once again struggling with an American accent, but he is ably suited for the somewhat generic 'every man' hero that these films usually require.

I do like the cliches the film doesn't exploit.  The above-noted girlfriend is not magically kidnapped and brought to the bunker for the finale.The president has a son hidden in the White House who does not end up in peril during the climax.  In fact, the search for said child (Finley Jacobsen) provides what little suspense the film has to offer, and it gives Banning a specific task to accomplish during the opening half of the picture beyond just randomly killing bad guys.  It also gives Banning's actions a genuine sense of purpose, as closer inspection post-viewing will make you realize how little good our would-be John McClane accomplished for most of the movie.  I don't want to go into spoilers, but the film's violence is at such a level that we realize that what heroism Banning committed is pretty much confined to the very end of the film.  Up to a point, the terrorists pretty much do all the horrible stuff they planned on doing anyway and, until a last-minute doomsday scenario, nothing Banning does really screws up their plans in any real way.

I'm not sure how seriously to take the film.  Yes, it's mostly grim and humorless, with bland patriotic platitudes intended to give the film an alleged 'depth' or nationalistic pride (flag goes down = America doomed, flag goes up = America saved!).  The picture is apolitical to an almost comical degree, ignoring even the idea of opposing political parties coming together to fend off foreign invasion. I love the bit where a villain launches into a brief 'why I did this' speech that seems to randomly include buzzwords he heard on CNN. But there is no disguising the xenophobia on display.  The people who enter our sovereign borders and slaughter us wholesale are all very very Asian while the only ones who can save us are very very Caucasian (Freeman and Bassett do little to help).  The film flirts with making Kang into a third-party terrorist but the implication is that it's North Korea's operation all the way, although I almost admire how the film doesn't attempt to make Kang a secret Neo-Nazi or in league with evil corporate baddies.

I'm torn between the sheer entertainment factor and the almost overt immorality on display, both in terms of its hardcore xenophobia and its use of astonishingly horrible violence in the service of what is supposed to be 'fun popcorn cinema'.  I both disapprove of the emotionless and mostly consequence-free carnage and think it's kind of awesome in that "I'm an eight year old boy!" kind of way.  It, along with The Gangster Squad (another terrible movie that I mostly enjoyed), may very well signal the twilight era of the neutered R-13 action picture.  You want R-rated action?  My lord is this R-rated action!  The opening siege is indeed a terrific action set-piece and the rest of the film gets by on the strength of its cast.  Olympus Has Fallen may be a terrible film.  But I won't pretend it's not a relentlessly entertaining movie.  And it's certainly more of a Die Hard movie than the last so-called Die Hard movie.