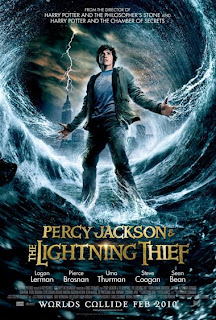 Percy Jackson and the Olympians: The Lightning Thief is a checklist of everything that could have gone wrong with the Harry Potter series but didn't. The Harry Potter franchise, which was also started by Chris Columbus, was set firmly in a world of fantasy. The initial chapter had a cast filled with notable character actors and actually gave them a chance to shine. It had three relatively unknown lead actors who rose to the occasion and approached the material as if it was Shakespeare or Tolstoy. It contained no pop-culture references, no dated musical soundtrack choices, and no forced romance. It was a real movie, written and performed at an adult level that just happened to be aimed at children. Percy Jackson desperately wants to be Harry Potter in the same way Eragon wanted to be Star Wars. Harry Potter and the Sorcerer's Stone was a film. Percy Jackson and the Olympians: The Lightning Thief is simply a condescending kiddie flick.

A token amount of plot - Percy Jackson (Logan Lerner, so much better in The Butterfly Effect and 3:10 to Yuma) is a child secretly born from his mother's brief affair with the Greek god Poseidon, King of the Sea (Kevin McKidd, so much better in Rome). Although he knows nothing of his ancestry, he is called into action when the lightning bolt of Zeus (Sean Bean) is stolen. Whisked away to a training camp for fellow demigods, Percy quickly realizes that the entire world rests on his ability to track down the stolen item and return it to Mount Olympus in due time. Can Percy and his new-found friends retrieve the stolen weapon and make peace with the Gods? Will Percy learn secrets about his ancestry and his childhood? Will you have a reason to care about any of this? Was the original story this contrived and generic? The answer to the last two questions are probably not (I have never read the series and know nothing of the books that this series is based upon).

The worst thing about the picture is how aggressively it panders to an audience that likely has no interest in the film anyway, while turning off the very young audience that it's allegedly aimed at. The film is filled with 'hip' soundtrack selections, awkward pop-culture references, and obnoxiously on-the-nose storytelling. Do ten-year olds really care whether or not Percy scores with Annabeth (Alexandra Daddario), the warrior daughter of Athena? Does anyone become invested in the puppy-love romantic subplots that are so constantly shoe-horned into kids films? Alas, while Hermione Granger was a real character with a purpose and drive of her own, Annabeth exists as theoretical eye-candy and/or a prize to be won for a successful quest. Of course, while Annabeth is introduced as a bad-ass warrior (complete with the 'gee, aren't we progressive?' snark), she is of course immediately sidelined or imperiled once the real plot kicks in. Will parents really want to explain what's going on during an atrociously-staged second act sequence where Percy, Annabeth, and Percy's stereotypical 'token black guy' protector Grover (Brandon T. Jackson, so surprisingly three-dimensional in Tropic Thunder) get trapped in a Vegas casino? I've never had an issue with adult content in kids flicks, but if you're going to have a scene in a PG-rated fantasy film where our heroes basically get high and nearly engage in an orgy with countless scantily-clad women, it better be important or at least entertaining. Otherwise, parents and feminists will be offended and fans of quality cinema will be insulted.

The dialogue is filled to the brim with the sort of 'We have to hurry!' and 'The villain is escaping!' exposition that often plagues entertainment aimed at younger audiences. Why writers feel the need to have the characters point out the obvious is beyond me (scripts for Batman: The Animated Series were half as long as the average animated cartoon purely due to the absence of such dialogue). While the film theoretically takes place as a battle between the Gods, most of the film takes place squarely on planet Earth, as much of the narrative involves a road trip across America in order to find little green balls that will allow our heroes... oh, never mind. Why on Earth (or Olympus) filmmakers thought that we'd rather be stuck in a pick-up truck with three uninteresting teenagers rather than watch Sean Bean, Rosario Dawson, Steve Coogan, Pierce Brosnan, and Uma Thurman in extended scenes as the Gods and Goddess of Ancient Greece is beyond me. Of the major stars, only Pierce Brosnan (as Percy's mentor Chiron, basically Dumbledore and Hagrid rolled into one) and Catherine Keener (cast in a thankless role as Percy's mother) have anything more than one or two brief moments and only Rosario Dawson and Steve Coogan do anything with the time they have (as Medusa, Uma Thurman basically does the same shtick she did as Poison Ivy in Batman & Robin). Heck, to paraphrase Gene Siskel, I'd rather watch a documentary of those above stars sitting around eating lunch together than witness the cliched and hopelessly generic 'adventure' narrative (the climactic reveal is telegraphed worse than 24's annual game of 'pick the CTU mole').

Sadly, Percy Jackson and the Olympians: The Lightning Thief is perhaps the worst-yet attempt to cash in on the young adult fantasy craze jump-started by 'the boy who lived' (to be fair, I've avoided The Seeker: The Dark is Rising). It lacks the epic grandeur and spectacular effects work of The Golden Compass and the deep-rooted family traumas of The Spiderwhick Chronicles. It lacks even the cheap amusement of Eragon and its Star Wars-stealing audacity. Heck, at least Eragon actually made use of Jeremy Irons, Robert Caryle, Djimon Hounsou, and John Malkovich (even if Malkovich never once rose from his chair until the film's final moment). As for Chris Columbus, it seems he is one of those filmmakers who is really two different people. Like Wes Craven (no way the man who made Vampire in Brooklyn, Deadly Friend, and Cursed also made Wes Craven's New Nightmare, Scream 2, and Red Eye), there are apparently two Chris Columbuses. One Chris Columbus is the man who expertly cast the Harry Potter franchise and built the foundation for the most successful fantasy series of all time. He also (for better or worse) wrote Home Alone and gave us a relatively faithful adaptation of Rent which starred nearly the entire original cast. The other Chris Columbus directed I Love You Beth Cooper, Stepmom, and Bicentennial Man. You can tell which one showed up to work.

Grade: D
Posted by Scott Mendelson at 9:44 AM

I agree with your analysis of Harry Potter...just so well done! Thanks for the tip, now I won't bother seeing Lightning Thief.

Continue to avoid The Dark Is Rising . It was horrid much in the same way of Percy.