"Death doesn't like to be cheated." Why the Ice Age series is the Final Destination of animated franchises: 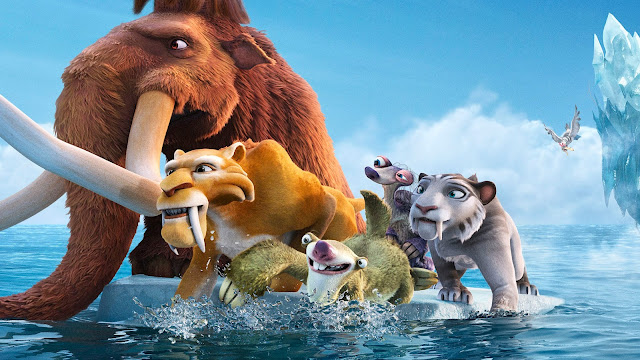 For those who wonder why I go out of my way to praise the Dreamworks Animation library, even the Madagascar films, you might want to sample Ice Age 4: Continental Drift. I'm not going to do a full review, but it's pretty terrible, a paint-by-numbers narrative (overprotective dads, boy-crazy teenage girls, damsels-in-distress, etc.) that makes Madagscar 3: Europe's Most Wanted look like The Incredibles. With another overseas haul over $225 million before the film even touches US shores, there is a good chance that the series will actually produce more sequels than The Land Before Time (13 chapters, natch). I made a comment yesterday, sight as-of-yet-unseen, that the Ice Age series was basically the Final Destination series of animation. In that I meant that both the first Ice Age and the first Final Destination films were real movies, they were thoughtful, character-driven dramas that were surprisingly somber and meditative about their core subject: death. Final Destination 2-5 and Ice Age 2-4 may have been cartoon-ish and paper-thin crowd-pleasing entertainments, but the first installments had depth, meaning, and genuine emotional engagement.  They were real films.

The first Ice Age stares face-first into the metaphorical abyss that is the eventual planet-wide extinction that is headed straight for everyone involved.  There is no small amount of violence and death, from the past-tense murder of the lead character's (Manfred the mammoth played by Ray Romano) wife and child by (human) hunters to the death of a young (human) mother in the opening moments, a mother whose lost baby makes up the core plot of the story (Manfred alligns himself with Sid (John Leguizamo) to bring the child back to his parents, for arguably no other reason than to be decent in a time of panic).  And when Diego (Denis Leary) seemingly sacrifices himself to save his new-found friends, you get the feeling the only reason he was resurrected was because Fox was thinking about sequels. Back in March 2002, when Dreamworks was struggling with how to define itself post-Shrek and Pixar's violence was mostly emotional (re - Toy Story 2), Ice Age was a surprisingly powerful and refreshingly compelling look at morality right at the moment it arguably ceased being relevant for its anthropomorphized population.


Say what you will about the Final Destination series and their increasingly Mad Libs-like sequels, but the first film in the series was a real movie with genuine substance.  It was less concerned with spectacular ways to kill its plane crash survivors than exploring the emotional and psychological effects of its premise.  Mass-grief, survivor guilt, the idea of finding consequence in life once you realized your time was very limited, the first Final Destination film was both a fine splatter-fest and a thoughtful examination of the whole 'young people think they're immortal' sensibility. Unfortunately, a tonally-true and downbeat finale was lambasted by test-screening audiences, giving way to a crowd-pleasing 'final death' joke that has sadly defined the 'no harm, no foul' nature of the sequels.  Even Final Destination 5, which was easily the best of the sequels, misses that picked-scab touch that made the first film a near-classic of the genre.

So it is now the case with the Ice Age series. The first sequel was a relative mediocrity, but it at least had a token environmental theme and a small amount of genuine tension and peril (the villains do perish at the end).  But by the third film, the series had devolved into a glorified theme park ride, using its 3D effects (six months before Avatar) to craft set pieces that felt more like a series of (admittedly entertaining) roller-coaster rides than a full-blown movie.  Come what may, I have fond memories of it because it was the first movie I took my daughter to, just a week before her second birthday (it was a second run theater, she wasn't napping and it was too hot to play outside).  But this fourth film, like the fourth Final Destination film, is barely a movie.  It's a handful of action set-pieces, none of which are very involving, surrounded by the laziest and least engaging plot line imaginable.  While the film revolves around Manny's attempts to reunite with his possibly-doomed wife and child, the film makes no reference to his tragic past, a gutless choice that robs the film of what emotional engagement it might otherwise have offered.


One positive thing I will say about the series is that it makes a point to expand the surrogate family that it started with in each installment, as Manny found romance with Ellie (Queen Latifah) in The Meltdown and had a daughter in Dawn of the Dinosaurs, while this installment brings along a (admittedly token) love interest for Diego in the form of Jennifer Lopez (said baby is now a fourteen-year old voiced by Keke Palmer).  But the gang's fourth adventure is easily their worst, with not a shred of originality and barely any visual imagination to compensate.   On the plus side, if history follows true-to-form, Ice Age 5 will be the best film since the first entry.  One can only hope...

I always thought that the most interesting thing about Final Destination 1 (as revealed in one of the DVD extras) was that the test audiences wanted a more graphic death at the end, but also did not like that the main female character gets pregnant the first time she has sex with the lead male character (It's been too long since I've seen it to remember the names). So the violence was fine, but the really scary thing was that having sex can lead to pregnancy.

I'll take the Ice Age films over the Madagascar ones any day of the week. Neither series is particularly strong, but I've always found the Madagascar films to be a contextless barrage of awful jokes (yes, I've seen all 3) with annoying vocal performances. At the very least I like the characters in the Ice Age films and find them to at least attempt to tell stories. Madagascar 3 was a huge pile of nonsense that I found had absolutely no story, no character beats, and nothing redeeming about it.

To each their own, though.

I'd argue that Ice Age 4 is even worse than that because it's story is awash in the hoariest of 'family drama' cliches. It frankly made me angry that seemingly talented writers didn't even bother to craft a story that wasn't filled with used parts. At least Madagascar 3 was unique unto itself, for better or worse. Ice Age 4 had the sensibilities of a direct-to-DVD cheapie and didn't even look all that interesting to boot. Aside from the fact that I enjoyed Madagascar 3 more than you, it's a 'trying and failing' versus 'failing to try' issue for me.

Well, perhaps I spoke too soon. Despite enjoying Ice Age 1-3 more than the Madagascar films, I saw Ice Age 4 earlier today and it is everything you say it is and more. What an awful, nonsensical, turgid piece of product.