Review: Rise of the Guardians (2012) is a stunning disappointment, with little substance, no character. 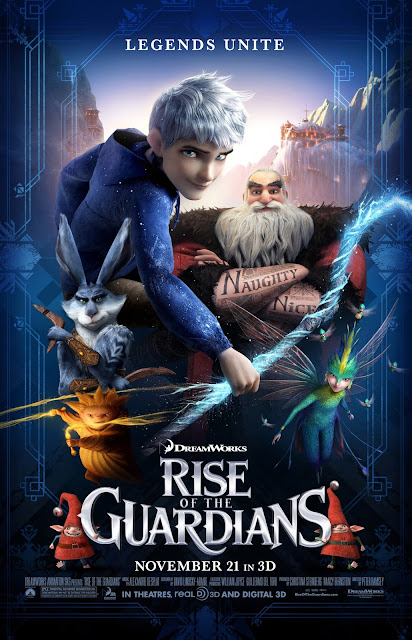 Rise of the Guardians is an astonishing exercise in generic storytelling, with so little new to bring to the narrative plate that even a morsel of good ideas can't save it from tedium.  I can't speak to the source material, but the film amounts to a high concept idea ("What if the various holiday mascots formed a superhero group?") where no more imagination was offered after the initial pitch.  The story is basically a Mad Libs team-superhero origin story, where we follow a new recruit into a new world and learn the mythology through his eyes.  That the story shamefully rips off the first X-Men is less of a problem than the heroic cohorts having almost no discernible characteristics beyond their costumes and holiday-related duties.  With paper-thin characterization and no real surprises in the offering, Rise of the Guardians amounts to a mostly dull effort that diminishes both big-budget animation and superhero stories at the same time.

The story basically concerns an attempt by the evil Pitch Black (Jude Law, giving what is easily the best vocal performance in the picture) to basically regain his hold on the subconscious of the world's children.  In his way stands four 'Guardians', keepers of holidays who also moonlight as superheros if the occasion calls for it.  Santa Claus (Alec Baldwin as a Russian, because casting Rade Serbedzija was just too damn perfect), The Tooth Fairy (Isla Fisher, who is um... the girl?), The Easter Bunny (Hugh Jackman in his natural accent which lends irony to the obvious parallels to X-Men), and The Sandman, who has no dialogue and thus has no celebrity vocalist at the helm find themselves drafting a new recruit, one Jack Frost (Chris Pine, benefiting from actually getting a real character to play).  Frost has no memory before he became the guy who makes snow and ice, and 300 years later he is forever pained because no one really believes in him anymore.  If he has what it takes to be a Guardian, he may just discover where he came from and whether or not he has the power to make children believe in him.

The four holiday icons have almost nothing of interest to say or do, providing little but half-hearted comic relief and periodic displays of superpowers.  Only Jack Frost and Pitch Black hold any rooting interest and their scenes together are easily the highlight of the picture.  The idea that these holiday icons can't be seen if they aren't believed is an interesting one, although the film does very little with it. Does Pitch Black merely want to be believed in the only way he knows how, or does he indeed put a paramount on instilling fear?  The film never goes into *why* it's remotely important to believe in said holiday characters, why said believe can't be restored with decisive action, nor why said characters will be harmed if they aren't believed (one presumes that heroism would be its own reward even if done in secrecy).  Pitch Black hasn't been 'believed' since the Middle Ages, yet he seems quite able to wreak chaos as the story begins.  The film misses an opportunity to deal with the various kinds of fear, be it rational fear or irrational paranoia (think Gavin de Becker) and it blatantly mistakes visual proof for faith and hope several times throughout the story.

Obviously Dreamworks had no intention of making an animated version of Candyman, but a number of fascinating ideas are ignored or skirted over in favor of a series of monotonous high-flying action set pieces.  Even those sequences lack any juice since we have no investment in the characters doing battle and there are no set rules about how the various super powers actually function (one seemingly important second act action sequence occurs entirely off-screen) .  To add insult to injury, the film doesn't even work as a visual marvel.  Oh there are intriguing sights and sounds, but the film seems shaded with a muted color palette that will remind audiences of the last time they messed up the "Tint" function on their television.  I personally think the 3D is to blame, as it takes an already muted color scheme and renders it oddly somber. If you've ever taken your glasses off during a 3D movie and looked at the image, you'll have a pretty good idea of what Rise of the Guardians looks like *with* the glasses on. From a studio that has produced some of the prettiest animated films of recent years (Puss In Boots, Kung Fu Panda 2, etc.) this is a staggering disappointment.

But far more important than the visual whiff is the by-the-numbers screenplay is the lack of worthwhile characterization or even clever dialogue.  My five year old is usually quick to proclaim the lead female character in a given cartoon as her favorite (sadly there is usually only one or two to choose from), but The Tooth Fairy is so painfully thin that she first named Pitch Black's evil horse(s) as her favorite character.  Absolutely no time was spent making distinctive characters for us to cheer during the major battle scenes and little time was given any of these characters anything interesting to say.  The quality of dialogue in this film barely rises above that offered in a random episode of Superfriends let alone the likes of Justice League, Wolverine and the X-Men, or even the just-ended Avengers: Earth's Mightiest Heroes.  The heroes are so generic that you'll find yourself rooting for Jude Law's Pitch Black as a thank you for mere entertainment value.

There are fewer bigger defenders of Dreamworks Animation (essay), so it gives me no joy to report how unsatisfying their latest effort has turned out.  But Rise of the Guardians is a film whose imagination died after the initial pitch session and what followed was an assembly-line construction with no distinction to be found on the character or screenplay levels.  Since it appears that these characters were initially introduced in their own separate William Joyce-penned stories, this film adaptation resembles nothing so much as a team-up story where all of the character development happened in prior adventures that we didn't get to see.  Imagine Bryan Singer's X-Men crafted in a fashion where you were already expected to have read the comics and/or watched the 1990s cartoon before entering the theater and you have an idea of how this film plays out.  It's full of flash and noise but almost no substance.

Considering Dreaworks' relative winning streak of late, this is arguably a whiff on the par with Pixar's Brave.  This wasn't some needless sequel or random cash-in (although Dreamworks has done well by those), but what appears to be a genuine attempt to create a worthwhile animated franchise.  The film has no pop-culture references, no pop music, and little slapstick, yet it is still a failure as an entertainment and as a piece of art.  Lacking even the distinct character of the slapdash Madagascar series or the impressive 3D spectacle and proudly feminist streak of Monsters Vs. Aliens, Rise of the Guardians is the least satisfying Dreamworks animated film in many years.  And as with Brave, I sincerely hope it is merely a bump in the road rather than a sign of what's to come (essay).