Review: Killing Them Softly (2012) is a strong crime drama slightly bogged down by overly explicit subtext. 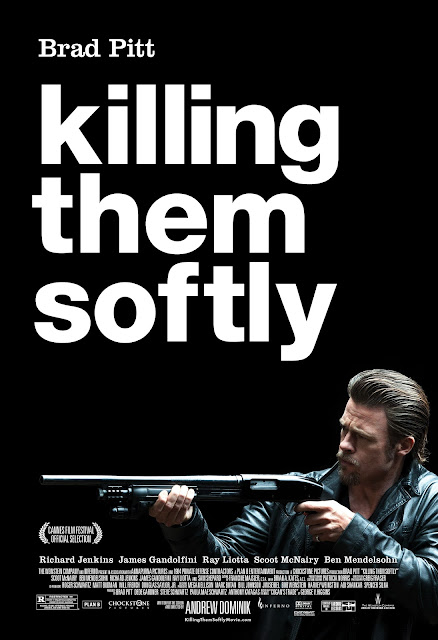 Andrew Dominik's Killing Them Softly has, from a conversational standpoint, one of the finest screenplays of the last few years.  It is a relatively low-key crime drama, filled with crusty character actors doing chewy character turns.  But more importantly, certainly more importantly than its sledgehammer subtext (more on that later), it is an absolute revelation in terms of the art of cinematic conversation.  The film is rich with authentic dialogue and thoughtful discussion, both of the film's issues and of matters related merely to character.  Frankly most of the film involves two or three characters conversing with each other, so it's a good thing the dialogue is so darn good.  When the film stays within its own world, it is a top-notch entry in its sub-genre.  Its only real fault is in trying too hard to achieve topicality and relevance, to the point where the subtext becomes explicit text.


The inciting factor that kicks off the film is a daring robbery of a gangland card game.  This is not the first time such a robbery has occurred, and immediate action must be taken to restore a sense of order in the organized crime community.  Enter Jackie Cogan (Brad Pitt), brought in by a local mediator of sorts played with deadpan nerve by the always wonderful Richard Jenkins.  He is a hit man plain and simple, although his assignment is slightly more complicated than merely finding and disposing of the perpetrators.  The illusion of order is as important, if not more so than actual order itself, so whether or not the right people get killed becomes less of a concern than merely showing 'something' being done in response.  That's all the plot you need so that's pretty much all you get.

What follows is a series of superbly acted and impeccably written verbal showdowns, which both entertain and illuminate Dominek's core idea (which I presume also comes from George V. Higgins's original novel Coogan's Trade): that the organized crime business, with no illusions about morality or fairness, is basically the purest possible form of capitalism.  Yes there is violence, some of it quite jarring, although a major incident is shot and edited in such a surreal fashion that it renders it loses some of its impact.  But the film thrives on the discussion of and anticipation of violence rather than the quick and brutal business at hand.  James Gandolfini has a heartbreaking extended cameo as a past-his-prime assassin brought in by Pitt as a quasi-favor.  His extended monologue discussing the fortunes of his wife is almost worth the price of admission by itself.

It should be noted that the film benefits greatly by basically having no female characters of note.  While one could argue that the Richard Jenkins character or any of the other low-level criminals could have been rewritten for an actress of note (say Melissa Leo), the film is also not burdened by superfluous romantic subplots that often mar what otherwise would be complete sausage-fests.  Scoot McNairy is superb as one of the initial armed robbers, realizing almost immediately how in-over-his head he is with seemingly no plausible exit strategy.  Ray Liotta also shines as an upper-level criminal whose prior machinations have left him utterly exposed for actions not of his doing.  The picture feels uncommonly authentic, and Brad Pitt again proves what a fine actor he is beyond the stardom and tabloids.

But the picture slightly harms itself by hitting you over the head with the same basic idea. Dominik's adaptation of the 1974 novel takes place during the weeks of the 2008 financial collapse.  And throughout the film, we are treated to countless scenes of characters watching news footage of various political figures (among others, George W. Bush, Ben Bernanke, and eventually Barack Obama) discussing the financial meltdown.  Even putting aside the idea that these blue collar mobsters would be running the news in their various meeting establishments as opposed to sports channels, the yellow highlighter gets old after the second such occasion, yet it continues throughout the picture.  Yes, we get it, the real crooks are those on Wall Street and/or the politicians that enable them.  Yes, capitalism is by definition an economic system that thrives on selfishness and rewards borderline psychopathic behavior.  The continious tie-ins to the social and political upheaval of 2008 basically amounts to Dominik jabbing you in the ribs with a ruler and whispering "Get it?  Get it?!".

It's not a fatal flaw, but it is enough of an annoyance to make what would otherwise be a great drama into a merely very good one.  Still, warts and all, Killing Them Softly is a very good film.  It has terrific acting by a superb cast of character players and has one of my favorite screenplays of the year.  Putting aside its politics, it is a fine portrait of the various levels of organized crime right down to what can only be called the working poor.  I wish Dominek trusted his audience a little more, but the ideas that he shares are still worthwhile and compelling even if he shoves them down our throats.

The picture remains a thoughtful, openly mournful, and always entertaining bit of old-school pulp fiction.  In a sea of quality adult movies, Killing Them Softly deserves your attention and your time.

Funny story at the advanced screening here in Vancouver BC. The Gandolfini scene in the restaurant where there was also some excellent dialogue was completely ruined by the Continuity Person. People were commenting afterward about the very poor continuity of the martinis and beers that was on the table. It was very distracting in what should have been a very gripping introduction to Gandolfini's character.

I figured the financial meltdown speeches (when only in audio form) were non-diegetic. You know, a bold artistic choice on Dominik's part. At least that's what I tell myself since I found it so completely jarring and unsubtle and unbelievable that they'd be listening to those speeches 24/7. I really liked the movie though.

Nice and Very useful review it clear my Queries now i doesnot think now i have need to watch this movie, but Killing Them Softly Black Leather Jacket i really like it. Its looks impressive in this movie trailers and his poster