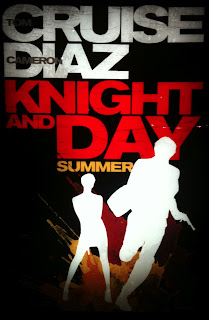 I can only wonder what kind of film James Mangold's Knight and Day would have been had it just been another action vehicle for a Tom Cruise (pre-2005) who was not in the midst of a PR-mandated comeback. Despite the fact that Cruise's pictures have done just fine since his 2005 couch-jumping, Scientology-hyping PR-meltdown, there is a perception that Cruise has lost his luster as a genuine movie star. So along comes Knight and Day, a variation on the 'wronged-man on the run with quasi-kidnapped female' story, which theoretically casts Tom Cruise as a borderline-satirical version on the Cruise persona (insanely-driven action hero with a touch with the ladies). As a satire on the stereotypical Tom Cruise action picture, it has its moments and its charm. But the film lacks the courage of its convictions, as well as the ability to take the story into territory that a more fearless Cruise of the 1990s would crash headlong into without thinking twice.

A token amount of plot: June Havens (Cameron Diaz) is returning home in order to attend her sister's wedding. However, a chance encounter with handsome and charming stranger Roy Miller (Tom Cruise) sets her on a path into danger and international intrigue. As the stakes mount and the body count rises, June finds herself questioning who is on her side, who is using her, and who is trying to kill her. Can she trust this apparent super spy with her life? Or is the would-be 007 a rogue agent who has gone completely insane and/or is working with nefarious forces?

The film works primarily as a pure action picture, with several glorious set-pieces that are completely absurd in their construction, yet oddly plausible because so much of the action seems practical. It is no small irony that action scenes that wouldn't be out of place in a Looney Tunes cartoon achieve a certain realism purely by staging them the old-fashioned way. What a delight to see real stunt-work, real fight choreography, and actual vehicle destruction on a grand scale. Another oddity rests in the fact that Tom Cruise, once Hollywood's preeminent superstar, has crafted something that resembles a B-movie in comparison to the more outlandish, fantasy-based entertainments of recent summers. The film is not cheap, and it certainly never looks cheap, but there is a quaint old-fashioned feel to the couple-on-the-run narrative and the practical action scenes.

But the film loses a certain amount of nerve as it goes on, and it's obvious that the filmmakers are afraid to follow the story to its logical, darker conclusion. I almost wish the action had been even more over-the-top, as it's just farcical enough to render much of it emotionless, while holding back from going completely insane. There is a sky-high body count of anonymous assailants, but next-to-no blood and almost no collateral damage. The copious violence has no sting or consequence. More importantly (and we're heading into vague spoiler territory here), the film lacks the courage to let the picture to pay off on the set-up. Point being, the Tom Cruise coming off of Interview With a Vampire or Jerry McGuire would have been unafraid to 'go there', but the Tom Cruise who is attempting to rehabilitate his image is seemingly afraid to risk completely losing the audience's sympathy, because he at this point in his career needs the audience to love him again.

The core idea behind Knight and Day is to remind people why they liked Tom Cruise in the first place. But those involved with the project forgot something essential: aside from the Mission: Impossible franchise, Tom Cruise is not an action-film star. He made his mark in legal thrillers (A Few Good Men, The Firm), character-driven dramas (Rain Man, Jerry MacGuire, Collateral), and sprawling epics (Born on the Fourth of July, Far and Away, The Last Samurai). Thus the film is most successful not when it's recasting Cruise as a romantic action hero, but when it's gently mocking his famously hardcore work ethic and professional drive. Tom Cruise didn't become a star because he looked good when shooting people with machine guns. Cruise became a star because he so-perfectly embodied relentless determination in one star vehicle after another.

Still, quibbles about how its motivations and complaints regarding the road-not-taken aside, the film that was made does barely work as a slapdash caper picture. Cameron Diaz brings surprising adult charm to a role that could have been a nonstop hissy-fit (she keeps manic screaming and shrieking outrage to a minimum). The generally wasted supporting cast (Peter Sarsgaard, Paul Dano, Viola Davis) succeeds only in bringing credibility to the proceedings, and Viola Davis once again proves that can do bitter, but seemingly-trustworthy better than anyone else (she was the lone highlight of Madea Goes to Jail). Most importantly for the general ticket-buyer, the film has several terrific action sequences that are creatively staged and coherently edited (I'm partial to an early fight on an airplane, filmed from the outside through the windows as we see the combat spill down the aisle). Tom Cruise is certainly capable of better, and perhaps a more fearless Cruise could have delivered what the material promised. Still, Knight and Day is relatively engaging entertainment.

Not That Guy said...

One typo alert and a couple of comments:

Typo: in the second-to-last paragraph, you have "worth ethic" instead of "work ethic."

Comments: I haven't seen the movie, though I have to say the trailer did a pretty good job of making the movie look appealing. I'll probably rent it, though.

The thing I would take issue with, though, is your dismissal of Cruise as an action star. I'll admit that I'm a Cruise defender, but I think his work in "Minority Report" was terrific. He was also pretty much the only tolerable part of "War of the Worlds."

I wasn't dismissing those two pictures, but even there he was an 'everyman caught up in a horrible situation' and a 'film noir detective'. Neither films, and I like them both, cast him as the prototypical action hero. Point being, it is IMPRESSIVE, not dismissive, that Cruise has had the success he has had primarily by flourishing in dramas and star-vehicles, the likes of which barely get made anymore.