Review: Harry Potter and the Deathly Hallows part I: The IMAX Experience (2010) 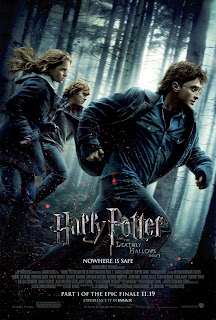 Harry Potter and the Deathly Hallows part I
2010
145 minutes

by Scott Mendelson
I've talked quite a bit over the last couple years about the sheer consistency of the Harry Potter series. With its top-notch adult cast and younger stars who improved each film, the franchise was remarkable in its reliable quality, its solid but-not overpowering technical attributes, and its character-driven approach. There has never been a bad Harry Potter film. Harry Potter and the Deathly Hallows part I breaks the pattern in a most unexpected way. This seventh and penultimate chapter stands proud as the very first out-and-out great Harry Potter picture. It's easily the best of the series, one of the best films of the year, and a towering achievement.
While the prior six films have flirted with the menace of Voldermort and his minions, this final story (obviously split up into two films) lays bare the stakes in unflinching detail. Lord Voldermort is not a kid-friendly supervillain, but an ethnic cleanser. The level of violence in this picture, both onscreen (quite a few murders, including a few major characters) and offscreen (the implied wholesale genocide of Muggles and 'mudbloods') is genuinely shocking. The consequences of Harry's quest are immediately established in a bitterly sad moment where Hermione erases her parents' memories of her to keep them out of danger. The undertow of hopelessness in the face of pure evil makes this seventh chapter a far more openly emotional chapter than the previous boarding school adventures. Sure, there were moments of high drama and devastating defeats in every prior picture, but the films always ended on a note of triumph or hope. With Dumbledore dead and the Death Eaters more or less taking over the wizarding world, Harry, Ron, and Hermione's quest to find the magical horicruxes that could theoretically destroy Voldermort feels less like a classic hero's journey and more like simply delaying the inevitable.
Since our three heroes spend a large chunk of the film on the run and by themselves, Daniel Radcliffe, Rupert Grint, and Emma Watson are required to do all of the heavy lifting this time around. The adults basically disappear after the first half-hour. Grint and Watson are especially good, as the later chapters of the saga have often regulated them to the sidelines in order to keep the focus on Harry Potter. Radcliffe has had emotional beats throughout the series, so his solidly low-key emoting is less of a surprise. Alas, it's always a shame when a Harry Potter film doesn't find the time for its illustrious band of adult actors, so treasure that first reel, where we get a job-droppingly scary and cruel meeting amongst the Death Eaters (Alan Rickman and Tom Felton act out their whole character arcs with just a few facial expressions) and tension-wracked before-and-after moments of a carnage-filled escape from Death Eaters. But the work that the young stars have done for the last nine (!) years pays off here, as they all get major moments of genuinely moving character beats, as well as a few moments of sunshine amidst the gloom. There is a sequence where Harry and Hermione share a brief dance in their tent, and it's a lovely little moment, as it's fashioned not as some unspoken sexual attraction but as one best friend extending a mental hand to another as they both try to stay sane.
While the film is generally a character-driven tone poem, it does have several exciting and exceedingly tense action scenes. The series has always been known for cheerful scares (even The Chamber of Secrets had loads of scary spiders and a one giant and terrifyingly malevolent snake), but the threat of human violence ratchets the suspense to an almost unbearable level at key moments. From the opening chase above the city, to a brief and disturbing skirmish in a brightly-lit nursery room, to the climactic chase through the woods, this is the first Harry Potter picture that succeeds wholeheartedly as an action film as well as a character drama.
It must be stated that this is truly one half of a five-hour movie. In a way, it feels like the penultimate episode of a long running television series, and as such it does indeed whet our appetites for the series finale in seven months time. But, as a stand-alone picture, Harry Potter and the Deathly Hallows part I is a pitiless plunge into hell, a sad and bitter drama where beloved childhood memories vanish in a puff of figurative (or in Hermione's case, literal) waves of a wand. For a picture technically based on a childrens' literature franchise, this is one dark and depressing motion picture. It is also a stand-alone work of art, a genuinely towering achievement that not only surpasses an already high standard of quality set by the previous six films, but ennobles their respective achievements as the building blocks to this deeply satisfying capper. Harry Potter and the Deathly Hallows part I is one of the best films of 2010, and one of the finest fantasy films in recent years. To paraphrase Jeff Golblum from The Lost World: Jurassic Park: congratulations Harry, now you're Luke Skywalker and/or Frodo Baggins.
Grade: A-
Posted by Scott Mendelson at 6:43 PM

It seems a little odd to give it A- after all that praise, though.

But seriously, what a terrific film.

It's not a perfect picture. The camping stuff goes on too long, and I did sincerely miss all the esteemed grown ups, even if that was a necessity of the original narrative. Basically, I suppose (in terms of arbitrary letter grades), I wanted to hedge my bets in case part II is even better.

Part 2 has a lot of heavy lifting to do, Scott. For one, they still have to explain to the audience how Voldemort came to choose Harry and Dumbledore's backstory with relation to the Deathly Hallows is an absolute must.

Given that, this film is tied with Half-Blood Prince as my absolute favorite.

The last images of Voldemort were stunning. Talk about having a painful wait to finish the story. That last triumphant image of Voldemort does it in spades...

Thanks for sharing this with us! Some really amazing features.
http://www.youtubers.co/pointlessblog-alfie