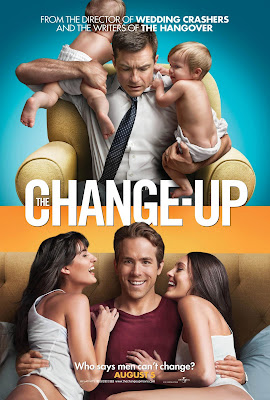 I'm not going to do a full-on review, but there are a few things I'd like to touch on.  First of all, the film isn't nearly as bad as many other critics seem to believe, nor is the film nearly as lurid or distasteful as its been advertised (I rather hate the above-poster, but there were no other one-sheet designs to choose from).  In terms of what it's about, it's actually a classical western, in that it primarily concerns the struggle between untamed freedom and orderly civilization.  The film is not as crass as 'gee, I'm shackled to a family while my friend gets to run around boning chicks'.  At its best, the David Dobkin picture hints at a simpler truth: that there are pluses and minuses to every sort of life we choose.  What makes the picture work better that it ought to is that the screenplay by Scott Moore and Jon Lucas (who also wrote the smarter-then-expected Ghosts of Girlfriends Past) gets at the heart of the matter: Two best friends, one with everywhere to be but no time to be there, while the other has all the time in the world and nowhere to be.

Had the film truly focused on that conundrum, it might have been something special.  Just like Date Night could have been a genuine triumph with less emphasis on the caper/thriller aspects of its narrative, The Change-Up is nearly undone by its need to be an R-rated raunch-fest.  As a result, the film is a near non-stop parade of f-bombs and scatological talk.  I have no objection to such material, but since 80% of said content is delivered by the character of Mitch Blanko (technically Ryan Reynolds, but in the body of Jason Bateman's Dave Lockwood after the first reel), the film ends up stuck with one half of the star duo who is an inexplicably obnoxious and heartily unsympathetic jerk.  More importantly, to meet the film's 'extreme humor' quota, we often see 'Mitch' acting in a genuinely unrealistic manner (swearing at his friends' kids, sexually harassing a female associate, interrupting a dance recital, etc) to those around him.  As a result, we get the idea that Mitch is not only a promiscuous slacker, but that he lacks even basic social skills and behavioral restraints.  Point being, had the film not felt the burden of 'earning' its R-rating, the very things that weigh the film down (Mitch's cringe-worthy behavior towards characters we like and/or care about) would have been severely limited.

That's a shame because in most other ways the film works.  The acting is solid across the board, and it is fun to see Bateman and Reynolds do reverse-typecasting.  I like that the film doesn't end with all the problems resolved, and that it deftly avoids the whole "He's a terrible father because he works for a living!" cliche that so many films (especially family films ironically) fall into.  It's nice to see an onscreen father who isn't an incompetent boob, and it's nice to see an onscreen mother who actually has feelings and opinions both related and unrelated to the narrative.  I'd imagine anyone who would call this film 'sexist' are the same folks who decried Knocked Up as sexist, as both seemingly guy-centric films give the most emotional pathos to Leslie Mann's suffering wife/mother (she plays a different type of character here, but the honesty is just as powerful).  And while Olivia Wilde is arguably the 'conquest', her associate attorney is presented as a somewhat fleshed-out character who clearly has interests and a full life outside of her role as 'the babe' (she's every bit as alive here as she is dead in Tron: Legacy and Cowboys and Aliens).  The film may be primarily about the dudes, but it gives equal time and at-least equal compassion to the women as well.

The Change-Up also gets one thing very right.  For those who have families, the biggest casualty is merely down-time.  It's the ability to read a book without wondering when you'll get a chance to finish it.  It's the ability to just pick up and go somewhere when you want to without making a plan or feeling guilty about it.  It's not so much regret about having the whole wife/kids thing so much as its a burning desire to be able to have your cake and eat it too.  When the film focuses on that conundrum, it is insightful and borderline thoughtful.  However, the middle 45-60 minutes of the picture often get bogged down with pointless comic riffs (SEE Mitch screw up Dave's big merger at work!) and relatively unfunny sexual hijinks (SEE Dave deal with the horrible truth about Mitch's new job!) that gets farther away from the honesty presented in the film's set-up.  I cannot say what the movie would have been like with a lesser rating.  But I cannot help wondering if the R-rating was a crutch of sorts, a way to merely roll out 'outrageous' situations instead of focusing on character and the theoretical reality of the situation.  And without the need to justify its R-rating, I cannot help but wonder if Mitch would have ended up as more character (a slacker, but a decent human being in need of a course correction), as opposed to the borderline anti-social misfit he is in the final cut. So while the final film isn't anywhere near as bad as the critical response at-large believes, one cannot help but wonder if some discipline, perhaps the sort brought on by the MPAA, would have fashioned a more thoughtful and arguably better film.

I couldn't agree with you more about the PG-13 rating and I have to say I never thought of it that way. I really didn't like the film because of its mismanaging of its characters, particularly Mitch (no matter what body he was in). Its hard to sympathize with someone so completely socially inept.

Also I found it kind of strange how incredibly unrealistic the depiction of babies was. Does anyone actually think a baby can toss a butcher knife with that kind of force? I could go on and on but that really stood out to me.