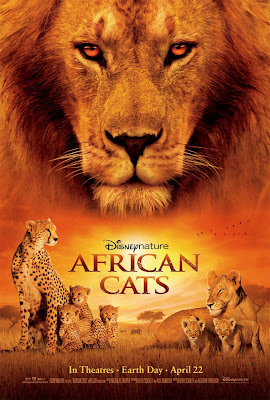 There's not really much to say about the newest in the Disneynature series of documentary pictures. It looks absolutely gorgeous, with a nice mix of the intimate and the epic. Like March of the Penguins and the other nature documentaries that have followed in its wake, African Cats is basically non-fiction footage with a narrative attached via narration and judicious editing. Samuel L. Jackson narrates the proceedings, and its a suitably hammy and exciting delivery. The issue of course is that, like many nature documentaries aimed at mainstream audiences, there is an all-too obvious attempt at anthropomorphizing the pride of lions and the single-mother cheetah and her cubs at the center of the story. Behavior that may be cold animal instinct is constantly attributed to maternal affection and recognizable human emotional motivations. The story itself, a turf battle between two male lions and the cheetah family caught in the middle, may in fact be what happened as the cameras rolled over a two-year period. But, when even the makers of the seemingly silently-observant Winged Migration admits to staging, I cannot help wondering how much of the 'story' was wholeheartedly manufactured for the sake of heart-tugging.

It's a double-edged sword of course. On one hand, we decry the apparent fictionalization of this real-world document. But, if the purpose of this documentary and others like it is to acquaint younger viewers with the basic idea that animals have brains, hearts, and 'souls', then the first step of that process is more-or-less convincing these youngsters that animals are 'just like us'. But even if we acknowledge the necessary evil of humanizing these wild animals, did the process have to be so melodramatic? Going into the film, I was worried that my three-year old would be disturbed by the whole 'animals eating animals' as well as the periodic moments of emotional distress (there is a bit of that, but the film earns its G rating). Jackson's narration does its best to amp up the tension and suspense, arguably creating drama where none may have actually existed onscreen. As it turns out, the only thing my daughter was really frightened by was the overbearing music (score by Peter Cobbin), which was only slightly less overbearing than Jerry Goldsmith's score for The Omen III: The Final Conflict. My daughter is at that age where loud noises frighten her (automatic-flushing toilets are a constant problem), so the needlessly melodramatic and overpowering score was a little annoying, to be frank.

As for the actual onscreen content, she did ask the occasional awkward question ("Why is that zebra no longer alive?", as a zebra was being eaten by several cheetahs), but by the time a cheetah takes down an antelope in a triumphant end to her hunger (the herds have returned from migration), Allison literally clapped her hands and happily (and quietly) exclaimed: "Yay! Tasty horse!". So while Allison enjoyed the movie overall (she liked the cheetahs, but not the lions) and my wife pretty much welled up at all the appropriate emotional beats (she's one of those people who has turned to emotional jelly since having kids), I can only count myself as moderately satisfied. Point being, there is a cost to the rampant anthropomorphization that occurs in films such as this. Because the film is so reliant on an emotionally-tinged and seemingly constructed narrative, I had to remind myself that I was watching documentary footage throughout the running time. But the footage is dynamic and gorgeous, worth the price of admission if you're a fan of wild animals and/or untouched frontiers. But I can only imagine how this movie (and others like it) would play without the endlessly manipulative narration and musical score.

It's a tough call. It's obvious that March of the Penguins (a much bleaker and more depressing film, a 'trail of tears with penguins' if you will) and the likes of African Cats depend on a certain 'Gee, look how lions love their babies just as much as people do!' pandering in order to get general audiences invested in the picture. But perhaps that investment is a small price to pay for instilling a love of nature and/or animals in the younger audiences at a crucial age. African Cats delivers on what it promises and works as a solid gateway film for young audiences to learn about the world just outside their front door.

Grade: B
Posted by Scott Mendelson at 9:45 AM

hiiiiii, big fan of wildlife. loved the movie. especially the soundtrack. could i know some how the music score sung by this single lay in high pitch with a melo dramatic song at repeated intervals. thank you