Review: The Disappearance of Alice Creed (2010) 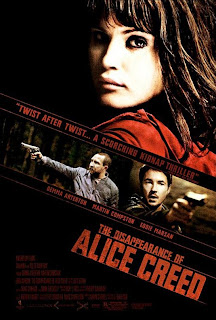 There is nothing particularly wrong about J Blakeson's The Disappearance of Alice Creed, but there is next to nothing interesting or special about it. It's basically a glorified stage play, a tense crime drama about a kidnap victim and her two captors. Set in a single location and mostly played out in two rooms, the film purports to be a psychological thriller that attempts to subvert the cliches of a standard kidnap-thriller. Yet upon closer examination, the film contains no real surprises and ends up hewing much closer to formula than you might have initially presumed.

A token amount of plot: Alice Creed has been abducted and taken to a loft, where she now lies shackled to a bed with a bag over her head. Her two captors, Vic and Danny, simply want a large ransom from her wealthy father. As the drama plays itself out, Alice does what she can to survive, while unknown connections between kidnapper and victim, as well as kidnapper and kidnapper, rear their ugly heads and threaten to spoil what should have been a simple crime. That's pretty much it.

After a terrific, and nearly silent, initial fifteen minutes where the crime is planned and then carried out in cold objective detail, the film settles into a boring pattern of watching Vic and Danny argue about the scheme mixed with occasional moments of Alice attempting to talk her way out of her dilemma. As demanded by law, Vic (Eddie Marsen) is the gruff, volatile, and in command, while Danny (Martin Compston) is younger, more emphatic and eager to please his elder kidnapper. And young Alice (Gemma Arterton) is given just enough alleged moxy to occasionally get the better of her abductors, yet she still spends the majority of the film bound and ball-gagged.

While there are a couple genuine twists in the narrative, the film eventually goes down such a predictable road that one not even see the film to correctly guess how it ends. And since there is no real plot progression until the climax, the majority of the running time simply becomes a waiting game to get to the end of this particular caper. Aside from the potential ickiness of the subject matter (some will certainly be turned off by the constant bondage/S&M imagery) and the disconcerting idea of an actress having to spend an entire film stripped naked and objectified in an apparent bid to be taken seriously as a thespian, the fact stands that the film is dreadfully boring for the middle hour and change.

The Disappearance of Alice Creed is not suspenseful or funny, it's not tense or particularly entertaining. It lacks originality or a genuine purpose beyond a failed attempt at pulpy thrills. It's certainly well-acted and impressively shot, as Blakeson does what he can to make the single-location drama feel cinematic. The picture does its job and moves on, but it fails to create a reason for its existence.