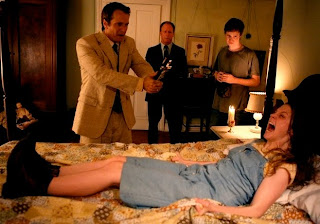 Despite my offhand comments last week about summer being over, two new openers delivered better-than-expected results as summer officially came to a close. It was a tight race for first place this weekend, as Lionsgate's The Last Exorcism took the runner-up spot with $20.3 million. The fake exorcism documentary was a bit frontloaded (2.1x weekend multiplier) and received a 'D' from CinemaScore. However, that audience distaste was more a result of fraudulent marketing, as the socially relevant, relatively realistic and gore-less fauxomentary was sold as a thrill-a-minute horror film from the mind of Eli Roth and a religious thriller in the vein of The Exorcism of Emily Rose. In other words, audiences hated it for the same reasons that critics generally enjoyed it (it's at 71% on Rotten Tomatoes), it's just that critics hadn't felt that they had been sold a bill of goods.

Ironically, while he was only a producer on this one, it opened bigger than any of the three films (Cabin Fever, Hostel, and Hostel II) that Eli Roth himself directed. The film posted the 15th-biggest opening in Lionsgate history, their seventeenth $20 million+ debut, and their fifth-biggest opening not involving a Saw sequel or a Tyler Perry epic. Regardless of longterm business, Lionsgate allegedly picked this up for $1 million, so this is their second major win in a month after The Expendables (at $82 million, the Sly Stallone epic is now their fourth-highest grossing film). I'm glad to see that Lionsgate is getting their mojo back, partially by returning to their roots a bit. Their 2-year quest for 'respectability' has not been kind to them. At the end of the day, Lionsgate theatrical puts out trashy action pictures, high-end horror fare, and the Tyler Perry melodramas. It's what they are known for and what they are good at marketing. Let their DVD branch put out the prestige stuff (Winter's Bone, Away From Her, Agora, This September Issue, Stoning of Soraya M., etc) via Village Roadshow and New Market.

Somewhat surprisingly, first place went to the Screen Gems cheapie Takers. Despite a delayed release date and some of the worst photo-shopping I've ever seen on a poster, the riff on Michael Mann's Heat opened to $20.5 million. Produced for around $20 million, the film has a B-star cast (Idris Elba, Hayden Christensen, Matt Dillon, Chris Brown, Jay Hernandez, Zoe Zaldana, and Paul Walker), and a solid trailer. Pardon the broken record, but there is a distinct lack of B-movie genre fare like this, and if you can keep the costs in line, you can usually make money on an old-fashioned action picture. It looked more big-scale than Armored and less comic book-flashy than The Losers (which theoretically turned off older audiences), thus you get a good opening off of Takers where as audiences generally ignored Armored and The Losers. For a shock, check out the cast lists for those three caper pictures, as Idris Elba, Zoe Zaldana, Matt Dillon, and Columbus Short were all in two of those three respective heist pictures.

In limited release news, Neil Marshall's Centurion scored $42,826 on 12 screens. Many have wondered why Marhall's followup to The Descent and Doomsday didn't merit a larger release, this is a Magnolia release. They basically do tiny theatrical releases as gloried advertisements for the Video On Demand and eventual DVD/Blu Ray releases. Only one to three movies per year even make it on 100 screens, and most are FAR fewer. Of course, that still doesn't excuse them opening The Host on the same weekend as 300 back in early 2007. Although, for a mediocre Mangolia film that's loads of fun anyway, check out The Oxford Murders if it's still on VoD (just listening to John Hurt pontificate for 105 minutes makes the movie). In other 'limited release' news, some art house picture called Avatar got a specialty release this weekend on 800 IMAX and 3D screens. The environmental sci-fi film, apparently from that guy who made Aliens and Titanic, grossed $4 million for a $4,9306 per-screen average, the third best in the top-twenty. Oh wait... right. The re-release of James Cameron's Avatar spurred about 400,000 people to leave their homes to see a movie that has been on DVD and Blu Ray for several months. Anyway, the film crossed the $750 million mark, ending the weekend with $753 million in domestic sales. It will be in re-release until Resident Evil: Afterlife takes said 3D and IMAX screens away on September 10th.

In holdover news, Toy Story 3 crossed the $1 billion worldwide box office mark, making Disney the first studio to have two $1 billion-grossers in one year (after Alice in Wonderland, which Toy Story 3 will surpass next week), and owner of three of the seven films that have grossed $1 billion in global ticket sales. It's already the sixth-biggest film of all-time, with $54 million between it and Pirates of the Caribbean: Dead Man's Chest for fourth place. Last weekend's new movies (Vampires Suck, Lottery Ticket, The Switch, Nanny McPhee Returns, and Piranha 3D) had large but not fatal tumbles. Eat Pray Love is at $60 million, Inception is at $270 million, and The Other Guys is just shy of $100 million.

That's all for this weekend. Join us next weekend when Drew Barrymore and Justin Long try Going the Distance, while George Clooney tries his luck with a Wednesday opening with The Assassin (don't do it George... you're not Harry Potter!), and Danny Trejo teams up with Jessica Alba, Cheech Marin, Michelle Rodriguez, and Lindsey Lohan against Steven Seagal, Jeff Fahey, and Robert DeNiro in Robert Rodriguez's Machete (which I'll be seeing on Wednesday, so look for a review on Friday morning).