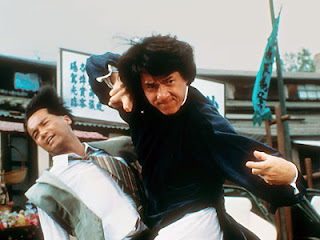 When 'the Part-Time Critic' gets into a project, he doesn't do it half-assed. He's been slowly compiling a list of his picks for the 100 best fight scenes featuring Mr. Jackie Chan. He started at the end of June, and he finally posted the final top-ten list this afternoon, thus allowing me to link to it. 100 fight scenes, each with a solid paragraph of context and a You Tube embed of pretty much every single one. Allison didn't have preschool today and I'll likely be at work all day tomorrow, thus that alleged '2010 summer box office analysis' might be a bit delayed. I'm seeing Machete on Wednesday night, but the review won't drop until 12:01am on Friday (embargo). So until I get a chance to bang out something more relevant than a random trailer or a bit on a rumor that gets debunked a week later, here's Kyle Leaman's rundown of Jackie Chan's Top 100 Action Scenes. Enjoy...