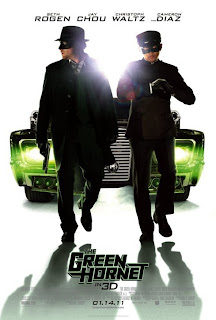 There is a refreshing quaintness to Michel Gondry's The Green Hornet. In an age where every comic book adaptation and/or superhero adventure story sets out to be the biggest, most explosive, most fx-filled, most fantastical epic ever made, this new adventure (an adaptation of a classic radio serial) keeps the proceedings down to earth. It is, at its core, a character comedy rooted in an unexpected friendship that just happens to have the occasional car chase and action set piece. It brings to mind the 1990s superhero films, in that theoretical dead zone between Batman and X-Men, when the few super hero pictures weren't afraid to have just a little charm and a touch of knowing panache.

A token amount of plot: Scorned at an early age by the death of his mother and his father's cold and distant relationship, Britt Reid (Seth Rogen) is the spoiled, aimless son of recently-deceased newspaper owner James Reid (Tom Wilkinson). As Britt mourns the sudden loss, he stumbles upon his father's former mechanic, an engineering genius and martial arts whiz known only as Kato (Jay Chou). Lashing out for their own respective reasons against the late elder Reid, the two team up to use Mr. Reid's technology to fight crime, as a way of atoning for their previously aimless existences. But knowing that advertising their super-heroic natures will only put innocents in jeopardy, they instead masquerade as costumed super-villains, bent on destroying the criminal competition. Said 'crime spree' quickly attracts the attention of resident crime boss Chudnofsky (Christoph Waltz), who is having a bit of a midlife crisis as he wonders if the underworld still fears him like they once did. Will Britt Reid (now calling himself the Green Hornet) and Kato succeed in their scheme to rid the city of crime by becoming criminals themselves?

To say that the film doesn't take itself too seriously is almost a given considering the cast and general premise. But what differentiates the picture from the recent glut of comic book adventure films is the absolute lack of pretension and the emphasis on character interaction. The core of the film is the friendship between Britt Reid and Kato. Seth Rogen and Jay Chou have a relaxed and completely unforced chemistry. The film certainly goes off into a verbal tangent or two, and it gives the two stars real room to breathe, so that we actually see these unlikely allies getting to know and like each other. The fancy car and snazzy gadgets are secondary to the somewhat silly story being told. What's most refreshing is that Kato is not forced to be a sage monk of infinite patience and wisdom. Yes, Kato is smarter and tougher than Britt, but he's just as prone to selfish impulses and just as willing to appreciate the sheer enjoyment of fighting crime with high-tech gadgets.

The supporting cast is filled out nicely by various veterans and character actors. Cameron Diaz scores a few laughs as an assistant with an uncanny knowledge of organized crime, and it's to the film's credit that she doesn't serve as a love interest for either of our heroes. A welcome, if underused, Edward James Olmos plays it straight as the current head of the Reid family newspaper, and Edward Furlong drops in for a brief appearance. The opening moments involve a genuinely hilarious cameo that I won't spoil, except to say that can only wonder when he found the time. But most superhero films are only as strong as their villain, and Christoph Waltz delivers in spades. The evil Chudnofsky even gets a character arc of his own, as he spends much of the film figuring out how to win back the ability to terrorize that he once possessed, an ability that now resides with a masked criminal moving in on his turf. Waltz scores big laughs in every scene he is in, and he's one of the more just-plain amusing villains of this nature since Treat Williams smart-assed his way through The Phantom.

The action scenes are nothing to write home about, although the brief glimpses of 'Kato vision' are slightly amusing. The car chases are a bit choppy, but I was pleased by the action finale, which is one of those seemingly never-ending set pieces that just keeps going from one location to another, while constantly finding clever beats along the way. I like that the villains don't screw around, as Chudnofsky immediately sets out to kill the Green Hornet and attempts to do so as quickly and efficiently as possible (there is very little 'monologuing', except when it serves character beats). I like that the film is almost obscenely violent in spots, with several shocking deaths that only escaped an R-rating due to the irreverent tone of the picture. And I appreciate how the film slyly plays with comic book conventions and exists in a world where the characters had actual knowledge of the existence of fictional masked heroes and villains. This is no Scream/Kiss Kiss Bang Bang deconstruction, but far too many superhero pictures exist in a vacuum where seemingly no one has ever heard of Batman or Spider-Man. Oh, and the 3D is invisible and useless while the IMAX screen adds little, but don't hold that against the movie itself.

In the end, The Green Hornet feels above-all refreshingly old-fashioned. It's an action comedy built on character and the sheer joy of adventure, rather than oppressive special effects and overwhelming seriousness of purpose. It may be narratively sloppy in spots (a second-act conflict between our heroes feels manufactured and goes on a bit too long) and not every actor gets their due (Cameron Diaz and Edward James Olmos could have been combined into one character), but this is a film more about watching actors playing in the superhero sandbox then watching stuff explode. It has a strong social conscience, especially when it comes to the role of the press as a protector, and it is always entertaining and occasionally insightful. The action scenes are sparse and generally worthwhile (there's a bit too much sloppy cutting here and there), and the script is genuinely witty. In a world where super heroes are obsessively-driven guilt trips undone by their own tragic destinies, The Green Hornet is a reminder that, when we were kids, we actually thought it would be kinda cool to be a costumed hero.

Great to read a nod for GH. I warmed to it when I saw it earlier last year and thought it was too cool for the populist flavor but a treasure for Gondry fans. I doubt he would ever get such a big budget and I guess he knew it, which makes the whole film much more enjoyable! Blow their money!
http://lalalandandreellife.blogspot.in/2011/01/from-bad-coffee-to-good-coffee.html

"And I appreciate how the film slyly plays with comic book conventions and exists in a world where the characters had actual knowledge of the existence of fictional masked heroes and villains."

Kind of odd, since this property started on radio and predates the Phantom by 17 days, Superman by two years, etc.

"This is no Scream/Kiss Kiss Bang Bang deconstruction, but far too many superhero pictures exist in a vacuum where seemingly no one has ever heard of Batman or Spider-Man".

Meteor Man (1993) has a slew of references, including to Iron Man

On TV, Buffy would reference the Avengers and numerous others

The Power Rangers made similar references

The Cape made similar references

Now and Again had references to Captain America

Kick-Ass
In the 1978's Superman, a Thor comic book appears

In Spider-Man, someone says "You're not Superman, you know!" and Shazam shows up in dialogue.

During a flashback Frank Castle has about his family, his daughters are both wearing Spider-Man pajamas. Director Mark Goldblatt did this to pay homage to Spider-Man. The Punisher first appeared Amazing Spider-Man #129, which was dated February 1974.

[the Punisher is being tortured]
Lady Tanaka: Who sent you?
The Punisher: Batman.

X-Men (2000)
Susan Storm looks at an issue of People Magazine with her face on the cover. Also on the cover are the headlines "James Marsden eyes next superhero role" and "The Mystique of Rebecca Romijn".

Johnny Storm has a messenger bag with a Captain America symbol on it, or so I have heard.