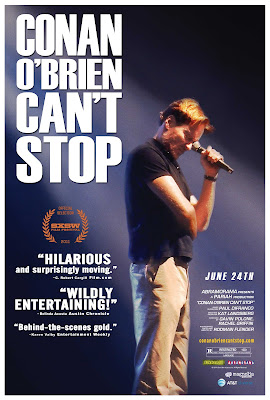 Any number of great rock n' rollers, from Elton John to Bob Seger, have written classic ditties about the less glamorous parts of being a touring musician.  Heck, anyone who wonders why Steve Perry will probably never ever reunite with Journey need only listen to "Faithfully".  No matter how much you enjoy the stage or how much you are driven to entertain the masses, the daily grind of actually going from one city to another, being away from loved ones for months at a time, is something that not everyone can endure.  So one can only imagine the stress that it puts on someone who has spent the prior twenty years entertaining as a day job, commuting from home to a single office building and putting on a show on the same stage night after night.

I imagine if you are reading a review about this Conan O'Brien documentary, you probably know about how O'Brien was given The Tonight Show by NBC, only to have it taken away several months later due to network politics, a botched experiment involving his predecessor, and some pretty awful contract negotiations (cough-time slot guarantee-cough).  As of now, O'Brien has a 10:00pm talk show on TBS.  This documentary covers the time in between those two developments, when the longtime talk show host spent several months touring around the country doing a stand-up/vaudeville hybrid of sorts.  The film covers the show from inception to completion, with all of the bumps along the way.  As befitting such a documentary, we see only a token amount of the show itself, with most of the screen time allotted to backstage drama.  At its best, we see a peak inside the mind of a famously private celebrity, a man who has wrestled with self-esteem issues even as his star rose higher and higher.  Since we know so little about the real Conan O'Brien, we don't always know how much of him to take at face value, which adds pathos to moments where he viciously ribs his staff and his fellow writers.  Is he playing for the cameras, is he just always 'on', or is O'Brien merely someone who occasionally lashes out as a defense mechanism?

The film doesn't offer such explicit psychological platitudes, but it does detail the mental and emotional toll that the tour bus takes on O'Brien.  Doing the same general material over and over again, spending months away from his wife and kids, dealing with overeager fans and the flesh-pressing that seems to precede and follow every show, well, the core of Conan O'Brien Can't Stop remains the dichotomy between a man who loves to entertain and 'cannot stop' doing it and the genuinely unpleasant realities of actually being a touring entertainer.  The film falters somewhat by not showing how this affects the other members of this team.  Andy Richter, also a family man used to working somewhat closer to home, is shown as relentlessly cheerful and reassuring, yet sure the grind got to him as well?  And the film slows to a crawl whenever we spend time watching Conan and his team toss off jokes and work out their material.  It's interesting, but there are few things less funny than watching funny people toss material off of each other.  Like watching a movie being shot with no effects and no music, it's miraculous that something so crude and artificial can become a refined piece of polished entertainment.  It doesn't help that everyone feels the need to laugh a little too hard whenever our star cracks wise, as if anyone is surprised at this point that Conan can turn a punchline.

Conan O'Brien Can't Stop is both a document of a singular moment in time (the "Legally Prohibited From Being Funny On Television" tour) and a more generalized portrait of a man struggling with the brutal reality of being a traveling showman while maintaining his drive to continue to entertain mass audiences.  No one is expected to feel sorry for Conan or anyone else during the course of the film.  But it does peal back the curtain to reveal the less than glamorous side of a seemingly glamorous enterprise.  Conan O'Brien finishes his tour with nothing but praise for those who helped him and for the audiences that cheered him.  I can believe him when he says that it was a wonderful and unique experience that may be one of his crowning achievements as a performer.  But I sincerely doubt that he will be doing anything like it anytime soon.  Without being overt about it, the key question of this film is whether Conan O'Brien's relentless need to entertain, combined with his obvious talent at doing so, is a gift or a curse.

Grade: B
Posted by Scott Mendelson at 9:45 AM