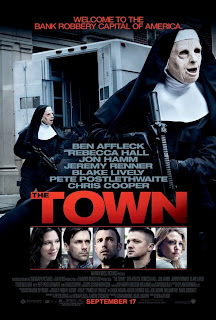 The Town is a film that is crippled by its own fairytale desires. While the picture pertains to be a character-driven drama about a Boston bank robber and his desire to go straight, it is undone by a refusal to even acknowledge that its lead character has anything to truly atone for. It is one thing to have a sympathetic portrait of an anti-hero as he struggles to be decent in a world that values his indecency. But it is another to take a straight-up criminal and convince us that he is actually some kind of hero. As a result, the key relationships don't work, the action scenes lack suspense, and the audience is left with no reason to care about the outcome.

A token amount of plot: Doug MacRay (Ben Affleck) is a brains behind a four-person robbery team that operates in Boston. During their most recent bank job, the hothead of the team, James Coughlin (Jeremy Renner), takes manager Claire Keesey (Rebecca Hall) as a hostage for the getaway. Although she is released unharmed, Keesey is emotionally shaken from the experience, and James gets spooked when it turns out that she's from the neighborhood. Fearing bloodshed if James pokes around, Doug offers to inquire as to whether Claire is a danger to their unit. But complications ensue when Doug and the unknowing Claire fall in love, which leaves Doug even more determined to leave the life behind. But can he balance his newfound romance with his loyalty to his neighborhood? And what will become of him when FBI agent Adam Fowley (Jon Hamm) closes in on the tightly knit team?

At its core, The Town is a well-acted, and somewhat well-written variation on the 'but he cries at opera' genre. Affleck's Doug may be a brutal and theoretically murderous armed robber, but it's okay because he has dimples and protects his new girlfriend from threats old (he puts on a mask and attacks her cat-calling neighbors) and new (James isn't thrilled when he finds out that his pal is dating an eyewitnesses to their crime spree). Nevermind that his inexplicable romance puts Claire in further danger from both his fellow criminals and from a suspicious FBI, it's okay because well, he's oh-so conflicted and felt bad about the initial hostage-taking.

Further contrivance comes in the character of Claire herself, especially when contrasted with the only other major female in the film. Claire is portrayed as a perfect upper-class woman, someone who donates her time to kids, tends her garden, wears nice suits, and keeps her hair perfectly done even for a trip to the laundry mat. The other woman in Doug's life is Krista (Blake Lively), James's drug-addicted sister who looks shot-to-hell at all times, has a daughter with an unknown father, and still pines for Doug at every opportunity. Yes, the two women are supposed to represent the big choice that Doug has to make (a new life versus his old one), but Claire is so perfect and Krista is so flawed that the virgin/whore dynamic is more than a little discomforting.

Aside from the gender issues and the fantasy elements in play, the film is itself a pretty generic heist picture. There is the usual opening job that establishes the thieves and their opposition (Jon Hamm's FBI agent is the only truly adult character in the picture, and his blunt authority is a highlight). We have the mid-film heist, although said sequence really has no impact on the rest of the film (it's not a game-changer in any real sense of the narrative), it's just there to have an action scene between the opening and the climax. I certainly won't spoil how the film climaxes, but I will say you can probably guess with 95% accuracy how the finale goes down. While the second act chase is well staged, there is next to no suspense in any of the elaborate chases and gunfights since we know that Affleck and his crew can't murder anyone lest Doug become less of a sympathetic bank robber (it's not for lack of trying, Doug and his crew are just really bad shots).

Like last year's Public Enemies, we are asked to root for a serial criminal purely because he had a crappy childhood, is played by a handsome movie star, and treats his new girlfriend with a token amount of respect. And like that Michael Mann misfire, the most engaging portion of the film is spent with the law enforcement side, as Jon Hamm is a perfect mix of movie star scenery-chewing and realistic character-acting. Jeremy Renner does good work as the tightly-wound tough guy on the crew, and his bitter cynicism is a nice antidote to Doug's pie-in-the-sky fairytale ideas. Pete Postlethwaite and Chris Cooper turn in glorified cameos, although only Cooper has an actual scene to play (Postlethwaite is the mustache-twirling baddie who threatens Doug's new damsel).

Blake Lively does what she can, but her character is such a contrivance that all that's left is her outfit and giant earrings. It's saddening that this genuinely solid actress's portrayal of stereotypical lower-class trash is being hailed as an acting-breakthrough (oooh... she looks uglier, that must be ACTING), as if her spirited work in Sisterhood of the Traveling Pants or The Private Lives of Peppa Lee wasn't proof enough that she's more than her looks. Rebecca Hall gets some solid emotional moments, but her character quickly becomes a prize to be won, and its telling that we never see her outside of her interactions with Affleck or Hamm. Ben Affleck himself turns in a rote star turn, but he directs himself in so many soulful closeups, allows himself so many gratuitous glamor moments (he actually has a shirtless workout montage), and gives his character so many excuses and moral cop-outs that the film becomes an exercise in ego.

In the end, The Town is a stridently conventional potboiler, made to look more impressive than it is by its solid cast and the general lack of big studio crime dramas. While it pretends to be a realistic examination of class, the generational lure of crime, and the tightness of community, it's basically just about a bank robber who hits on his former hostage and spends the rest of the film trying to justify his callousness. By all means, excuse Doug's violent criminal activity and public endangerment because he looks like Ben Affleck and buys his new girlfriend a shiny necklace. Go ahead and root for Doug and Claire to have their happily-ever-after, as long as you realize that she can do better and that he'd gladly shoot you in the face if you got in the way of his star-crossed romantic dreams.