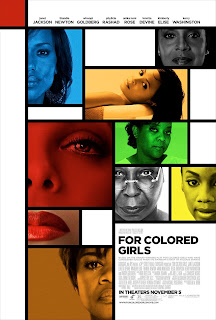 For the record, I have not seen the original play For Colored Girls Who Have Considered Suicide When the Rainbow is Enuf. This is my first exposure to this material and should be treated as such. Anyway, as a film, For Colored Girls represents only a token departure for Mr. Perry. The film is basically the classic Perry melodrama. Again we are treated to African-American women who have been beaten down by life, but like most Perry stories, these tales have little to do with race and only a token amount to do with class. But this one is stripped down to its bare essentials. There is no real comic relief of any kind. There are no religious overtones and reassuring gospel music. There are no knights in shining armor to save the proverbial day. In fact, there isn't really much of a narrative beyond the establishment of each woman's respective crisis and whether or not there is any resolution at the end. It is a tone poem, and thus works best as a piece of performance art.
Perry’s neat trick is to turn the film into a quasi-musical, with the monologues from the show serving as ‘musical numbers’. Each actress gets one or two of these little monologues, and it's a clever way to insert the overly obtuse original text into a conventional piece of narrative fiction. Yes, the film kinda stops in its tracks whenever someone starts into their respective poem, but it indeed feels like a conventional film musical, where a character stops in their tracks to sing about their feelings. This allows the rest of the film to generally avoid over-the-top melodrama and hysterics. Yes, there are moments of emotional grandstanding and spirited arguments, but they are relatively rare and always life-size. There's a great scene in the otherwise mediocre Why Did I Get Married Too when Tyler Perry and his wife (Sharon Leal) have an argument involving fidelity that never rises above a whisper. Perry seems to have taken that moment to heart, as many of the more openly emotional moments are delivered as low-key as possible. Of course, this makes the third-act moments of full-bodied emotion that much more potent. Even a second-act scene of shattering violence is staged more for tension and suspense than emotional manipulation.
If it needs to be said, all of the actresses are relatively superb. Janet Jackson is the weakest of the bunch, but she is also given the least heavy lifting (she's certainly better here than in the Why Did I Get Married series). Loretta Devine is a joy to watch as always, and one of the few bright moments come when she decides to stop being ashamed of her bumpy love life and use it as a teachable moment for the at-risk women she mentors. Whoopi Goldberg does solid work as a fanatical religious cult member who has scarred her daughters (Thandie Newton and Tessa Thomson) in horrible ways (if you've ever seen a Tyler Perry film, you can probably guess). I'd say her work is a revelation, but I've seen her play stone-cold evil on a 2006 episode of Law and Order: Criminal Intent.
Anika Noni Rose gets the film's best monologue, as she laments her shock that the theoretical rapist that she had always feared was not a guy with a mask in the bushes, but someone she trusted. Kerry Washington plays a sympathetic social worker who ends up intersecting with several of the other characters. Phylicia Rashad plays the un-elected mother hen of the group, and while her work is fine, she suffers from playing the closest thing to a saintly character. Finally, Kimberly Elise gets the meatiest role, as she has to deal with her alcoholic boyfriend and the devastating effects that the relationship has on her and her children.
As for the men, they are both villainized and humanized. The most outwardly noble male character is Washington's boyfriend (Hill Harper), as the social worker and her police officer boyfriend struggle with her inability to conceive. As a cop, he too mingles with the rest of the characters, and although he is a somewhat thin character, he shows moments of empathy. Only two of the male characters cross the line into out-and-out villainy, and at least one of them is given a moment of empathetic regret, as he realizes that he can never ever be a good person after his respective actions. That the men in this world aren't sketched out that much isn't really a flaw, as the film really isn't about them anyway.
The film shows its roots as a stage play, as the majority of the film is a series of verbal confrontations. As a flowing narrative, it is a bit choppy. But it works as it was intended: a tone poem that showcases several terrific actresses who are given material worthy of their talents. Like The Family That Preys (still my favorite Perry production), For Colored Girls shows Tyler Perry willing and able to play around in different sandboxes. In adapting someone else's material, Perry is forced to abandon some of his comedic vices. There are no class stereotypes, no homophobic moments, and no making comedic light of reprehensible behavior. He may never become an out-and-out great filmmaker. We may lament that Perry pretty much represents mainstream African-American filmmaking all-by himself, which in turn forces him to meet an unfair standard of being an all-encompassing ambassador (that's certainly not his fault). But he continually makes interesting movies that shine a spotlight on under-employed actors and actresses. Tyler Perry the dramatic filmmaker has always been vastly superior to Tyler Perry the comedian. For Colored Girls is certainly a step in the right direction. It may not be one of the year's best films, and it may or may not satisfy fans of the original play (that's what the comments section is for). But it remains on its own, a darn good film.
Grade: B
Posted by Scott Mendelson at 9:16 AM