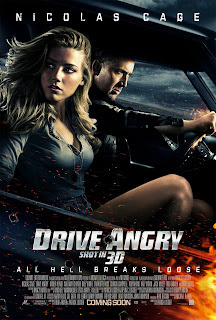 The problem with a film like Drive Angry is that it doesn't entirely trust the audience to get the joke. Oh sure, most of the people walking into the theater will understand that it is an homage to the drive-in exploitation fare of a generation or two ago. Yet director Patrick Lussier and writer Todd Farmer aren't quite willing to simply let the events play out onscreen without commentary. There is a periodic 'nudge-nudge/wink-wink' effect in play, a need to acknowledge the rule-breaking which transpires, that robs the film of its edge. The overly ironic approach only highlights that Drive Angry is not a genuine piece of filmmaking so much as a film school exercise in grindstone homage. At least Machete had something to say about the anti-immigration hysteria and/or national identity while (the admittedly inferior) Jonah Hex worked as a chilling parable to the fear of Tea Party-fueld domestic terrorism. Drive Angry is merely about itself.

Still, if you can accept that the picture is less an actual film and more of an exercise, there are genuine pleasures to be found. The plot is pretty simple: John Milton (Nicolas Cage, in tongue-in-cheek low-key Con Air mode) escapes from hell to avenge the murder of his adult daughter and rescue his infant granddaughter, who has been kidnapped by a crazed cult leader (Billy Burke) who intends to sacrifice her on the next full moon. He is aided on his journey by an embittered young waitress (Amber Heard), but is hunted by the Accountant (William Fichtner) who means to drag Milton back to hell where he belongs. What follows is the usual gruesome violence, wantin sexuality, and an utter lack of common decency. All of this pretty much plays out as you'd expect, although a third-act appearance by David Morse lends the film a gravity that the movie perhaps does not deserve. Cage plays it cool this time around. While some may yearn for the manic Cage of Bad Lieutenant: Port of Call - New Orleans, but Cage is smart enough to know that the material is zany enough to not need over-the-top theatrics. Truth be told, all of the actors are surprisingly low-key.

Amber Heard tries mightily to be more than a piece of ass/damsel in distress, but the film repeatedly puts her in a position of having to be rescued by Cage. Billy Burke oozes genuine malice and makes a pleasantly hiss-able villain. As for William Fichtner... in a just world, he would be up for Oscar talk come next December. His Terminator-like pursuer easily steals the picture, easily earning laughs with his sardonic disapproval and deadpan intellect. His character is refreshingly complex, as he isn't quite the villain that you might think upon his initial entrance. Finchter provides additional proof that all the 3D effects and gratuitous violence can't top a genuinely great character turn for sheer entertainment value.

As for those 3D effects, Lussier uses the format for as much in-your-face splatter as he can muster. To his credit, his previous picture, My Blood Valentine 3D, came out nearly a year prior to Avatar, so he was playing with 3D well before it was 'cool'. There is an improved quality to the 3D visuals this time around (he's still the only modern director to shoot in 3D twice), and he uses the extra depth to frame flashbacks as a form of forward-projected that we see as Cage drives toward his destination. Unfortunately, shooting in 3D still means we get a dark, glum visual style and that the film still looks like it was shot on the video that it was. For now, 3D remains as HD video was in the early 2000s. Back in 2002, unless you were George Lucas or Robert Rodriguez, your HD-video film just looked like a cheap direct-to-DVD production. 3D is now going through similar growing pains.

Despite the surface-level thrills (and the dynamite character work from Fichtner), the film suffers from a too-cute need to point out how 'extreme' it is. It's not enough to have Cage engage in a shoot-out while having sex with a bar waitress, the film needs to have characters comment on the absurdity of it. It's not enough to have a sympathetic character 'accidentally' kill two police officers during an action sequence, the film constantly needs to reference that moment as if to remind the audience that this film isn't concerned with conventional morality (although that moment of 'immorality' muddies an otherwise hopeful conclusion). My Bloody Valentine 3D may have been a flawed piece of genre throwback, but it was willing and able to stand on its own two feet without commenting on itself.

Drive Angry 3D is never boring and often fitfully amusing. This is certainly a more entertaining 'one-for-me' Nicolas Cage picture than Bangkok Dangerous, and the film does deliver on its promises of trashy thrills. I wish that the film trusted itself and its audience a bit more, but it's worth sampling if only for William Fichtner's wonderful comic creation. And the film earns points by actually ending without the need to leave countless loose-ends for a sequel. Yes, the finale does briefly tease where the surviving characters may go next. And, without giving it away, the idea hinted at is a ride I would gladly take.

I won't comment on Drive Angry until I see it, but I'm agree with you on Jonax Hex. That movie was a flat out disaster, but it had the elements to be a classic: The concept was good, the whole "terrorist" angle was great material and Josh Brolin was the right choice. Sadly, this movie was the victim of too many mistakes. The director should have been someone with more experience and visual flair. (Apparently Francis Lawrence was involved in the reshoots, why WB didn't get him in the first place?). Malkovich acted like it was there for the paycheck and don't get me started on Megan Fox. Only Brolin, Michael Fassbender, Lance Reddick and Jeffrey Dean Morgan were good in it. Sadly the script and specially the way WB handled the direction of the film (one week was R rated, then became the 73 minute PG13 crap) and the score (Metal, really?). Jonax Hex could have been a great film on paper, but ended as another worthless, forgettable crap.