Review: The Incredible Burt Wonderstone (2013) will make your laughter and interest disappear. 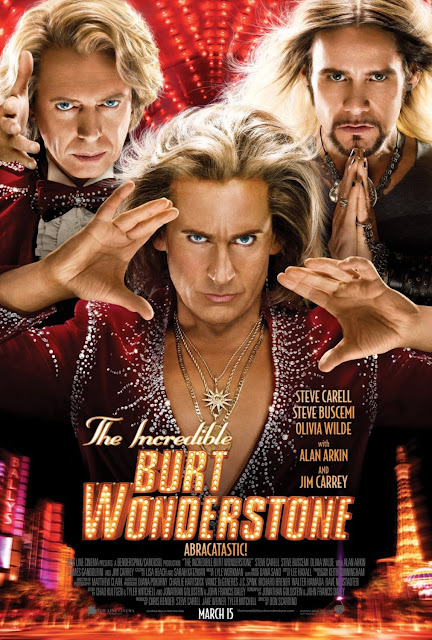 Among its many other faults, The Incredible Burt Wonderstone makes a solid case for the old 'television is better than the movies' argument.  The film is written by four different screenwriters all swimming in television writing experience and directed by a man who has directed almost nothing but television since 1990 and all of their various television projects are likely, by default, better than this film.  It features two actresses (Olivia Wilde and Gillian Jacobs) who did shine or are currently shining in well-developed three-dimensional roles on episodic television and uses them here merely as props for the boys to screw or ogle.   It contains a script seemingly written by committee that features less wit and smarts than any one of the 38 episodes of 30 Rock  by director Don Scardino.  But putting aside the film vs. TV debate, The Incredible Burt Wonderstone is an inexplicable missed opportunity, showcasing subject matter that isn't the least bit timely and highlighting the unmerited 'redemption' of a pointlessly horrible human being whose downfall is completely his own fault.  More importantly, save for Jim Carrey's supporting turn and a few grace notes along the way, it isn't very funny.

The film stars Steve Carell and Steve Buscemi as a pair of lifelong friends (Burt Wonderstone and Anton Marvelton) who spent thirty years doing magic tricks together and it picks up toward the end of their run.  Carell immediately establishes himself as a genuine asshole, sexually harassing his various assistants, boning various groupies, glory-hogging, and abusing his put-upon fellow magician.  So when the end invariably comes in the form of declining ticket sales and competition from a pain fetishist street magician (Jim Carrey, doing his best to make the film watchable with limited screen time), we aren't exactly busted up.  That the filmmakers (Carell is among the producers) felt the need to make Wonderstone such a wholly unlikable character in the opening half is bewildering, as we find ourselves rooting for the success of everyone else around Wonderstone, be it Marvelton (whose post-break up ventures provide the rare insightful chuckles) or their former assistant Jane (Wilde).  Even the allegedly villainous Steve Grey (Carrey) at least has the hunger for performance and the will to see his crazy stunts through.  The film is basically Rocky III without the first two Rocky films to establish why we should care about "Rocky's" comeback.

The film briefly sneaks in a reference to Jane having stage fright (a late script addition by Wilde in a desperate attempt to flesh out her character) to explain why she never made an effort to become a magician herself, but she is really just another obviously talented female who patiently waits to be allowed to perform by the men around her.  Wilde's duties mostly involve looking attractive and nodding her head in disapproval when Grey does something outrageous.  This is another case of a film having a female lead purely for the sake of a contrived romantic subplot as well as having an attractive woman to use in the marketing.  One can easily see a vastly superior film that's truly about the dueling ideas of mainstream magic, even if the proverbial David Copperfield vs. David Blaine debate hasn't been 'a thing' for ten years or so.  One can also see pretty much the same story but rooted in a main character who isn't a pompous jerk, which would make his downfall and would-be redemption all-the-more compelling.  The picture temporarily lights up in the latter acts as Carell encounters the aged legendary magician Lance Holloway (Alan Arkin) in a nursing home and the two have thoughtful conversations about why they did what they did. Contrived screenplay aside, the film almost works when Carell is allowed to be his low-key naturalistic self rather than attempting to create a bombastic Ron Burgendy-type character.

But the film fails to see the potential in its own scenario.  There is a moment towards the start of the third act where Wonderstone and Grey end up competing in a bit of one-upmanship and all I could think about is how wonderful *that* magic act would be.  We're supposed to be appalled when Carrey steals Carell's spotlight and/or humiliates him (Wilde certainly furrows her brow and disapproves), but the idea of a show combining old-school magic with somewhat more extreme performance art would be just the kind of thing I'd love to see on the Vegas strip.  Moreover, the scene ends with a final 'humiliation' yet the movie doesn't seem to realize that Grey, who is constantly accused of not being a real magician, has in fact performed a couple pretty fantastic old-school magic tricks.  Moreover, Burt and Anton's final illusion, the one meant to bring them back to glory, is not only closer to the 'extreme' tricks performed by Grey but, upon reflection, only a little less horrifying than Hugh Jackman's big trick from The Prestige.  Aside from the moral and legal implications, it's also the kind of trick that can only be performed so many times before its secret is inevitably revealed.

The Incredible Burt Wonderstone fails to illicit laughs out of its main scenario, expecting us to take a rooting interest in a pointlessly terrible human and rooting for his undeserved comeback.  Jim Carrey gives it his all and its refreshing to see him merely as a force of comic chaos, merely there to get laughs and exit stage right accordingly (he's once again the creator of comedy rather than the straight man reactor to it).  The rest of the cast, pushed out of the spotlight by Carell's apparent ego, fights for comedy scraps as the screenplay refuses to deviate from the contrived and the generic.  It is yet another variation of a mainstream film technically aimed at adults or older kids yet pitched at the simplistic level of a grade-schooler.  It's flat-footed, indifferent to its supporting characters, and mostly exists as an ego-stroking vanity project for Carell, a 50 year old playing a 40 year old chick magnet finding 'redemptive' romance with a woman 21 years younger than him.  This is frankly a terrible film, but ever more disheartening because the material for a decent comedy so obviously exists within the botched final product.  The Burt Wonderstone is a missed opportunity.  It is neither trick nor treat.  Its only worth is in reminding me, right now, in this final sentence, to go and rent the delightful The Great Buck Howard.

A really good entertainer. I agree that Jim Carrey's magic acts where a bit too violent for a family movie, overall the movie succeeded in entertaining the entire group. The attempt at humour at times seems over-the-top but in a movie about entertainers, this is acceptable.